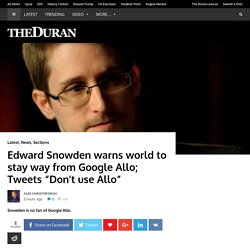 On the eve of Google’s latest app launch called Allo (a WhatsApp chat competitor), Snowden is tweeting to all his followers, and everyone concerned with NSA/FBI/CIA surveillance, not to touch the Allo. Google Allo, the new “smart” messaging app launched on this Wednesday, is ‘dangerous’ and should be avoided, says Snowden. Snowden posted a series of Tweets warning his followers to stay away from Google Allo. Snowden says Allo plans to… “record every message you ever send and make it available to police upon request”. “He makes George W. Bush and Nixon look good”: Why Obama’s attack on privacy is so historic. Dubai detectives to get Google Glass to fight crime. The Legal Claim Against Surveillance. Noam Chomsky: A Surveillance State Beyond Imagination Is Being Created in One of the World's Freest Countries. June 2, 2014 | Like this article? 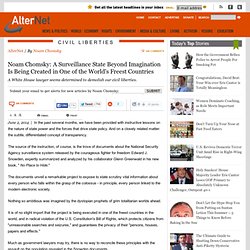 Join our email list: Stay up to date with the latest headlines via email. You Know Who Else Collected Metadata? The Stasi. Feb. 13: This article has been corrected [1]. 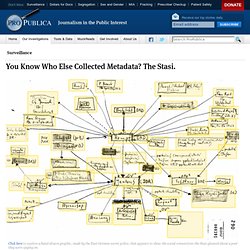 The East German secret police, known as the Stasi, were an infamously intrusive secret police force. Inside America's Plan to Kill Online Privacy Rights Everywhere. The United States and its key intelligence allies are quietly working behind the scenes to kneecap a mounting movement in the United Nations to promote a universal human right to online privacy, according to diplomatic sources and an internal American government document obtained by The Cable. 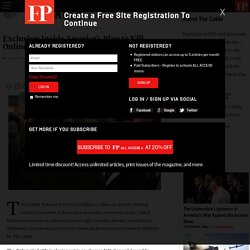 The diplomatic battle is playing out in an obscure U.N. General Assembly committee that is considering a proposal by Brazil and Germany to place constraints on unchecked internet surveillance by the National Security Agency and other foreign intelligence services. How People Disappear. Obama Proposes FISA Reforms Amid Growing Concerns Over NSA Surveillance. WASHINGTON -- President Barack Obama announced new measures Friday to increase transparency and reform the Foreign Intelligence Surveillance Court amid growing concerns over the National Security Agency's widespread surveillance programs. 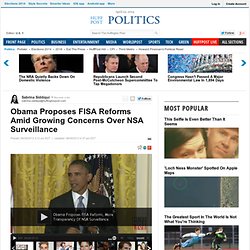 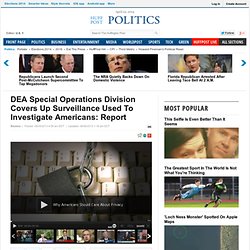 Drug Enforcement Administration unit is funneling information from intelligence intercepts, wiretaps, informants and a massive database of telephone records to authorities across the nation to help them launch criminal investigations of Americans. Although these cases rarely involve national security issues, documents reviewed by Reuters show that law enforcement agents have been directed to conceal how such investigations truly begin - not only from defense lawyers but also sometimes from prosecutors and judges.

High-Level US Government Officials Have Warned for 40 Years that Mass Surveillance Would Lead to Tyranny in America. Postal Service Is Logging All Our Mail for Law Enforcement. Data Mining for Terrorists. In the post 9/11 world, there's much focus on connecting the dots. 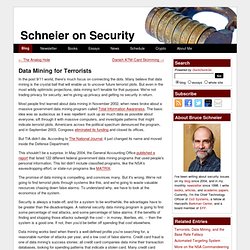 Many believe that data mining is the crystal ball that will enable us to uncover future terrorist plots. But even in the most wildly optimistic projections, data mining isn't tenable for that purpose. We're not trading privacy for security; we're giving up privacy and getting no security in return. Most people first learned about data mining in November 2002, when news broke about a massive government data mining program called Total Information Awareness. Surveillance and the Corporate State. With all of the fear mongering the subject has received in recent decades, Americans have in fact had remarkably little to fear directly from ‘terrorism.’ 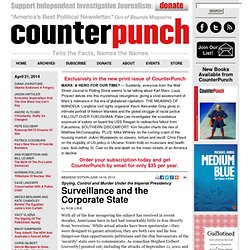 While actual attacks have been spectacular—they were designed to garner attention, they are both rare and far less dangerous than opportunistic politicians and the dim bureaucrats of the ‘security’ state care to communicate. As comedian Stephen Colbert (correctly) pointed out, including the attacks of September 11, 2001 and more recently in Boston, more Americans have died from furniture falling on them than from terrorist attacks. Depending on which statistics you choose, 10X – 20X more Americans die every year from (preventable) medical errors than have died in the entirety of U.S. history from terrorist attacks. In practical terms, terrorism is among the least probable threats Americans face. The Government Has No Right To Pry Into What Goes On In The Privacy Of Your Home.

I’ve been keeping up with the news recently, and as you’ve probably seen, this last week has been marked by several shocking revelations concerning the conduct of the National Security Agency and the federal government’s overall attitudes toward the privacy of the American people. 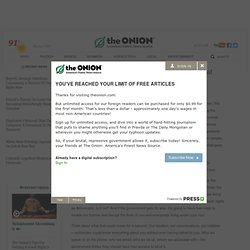 It’s spawned a vigorous debate, but to me, the answer couldn’t be any clearer: No matter what pretexts the presidential administration might have about protecting the American people, the government simply does not have the right to poke their nose into what goes on in the privacy of your own home. Bottom line: Your home is your sanctuary. And in your home, you should be able to do whatever you want for how long you want without worrying about someone spying on you.

The fact is, this country was built on a few fundamental principles, not least of which is the inalienable right to privacy and freedom from unreasonable searches and seizures. Nation Mostly Alarmed That Government’s Top Programs Handled By 29-Year-Olds. WASHINGTON—Following reports Sunday that the source of the leaked National Security Agency surveillance practices is 29-year-old government contractor Edward Snowden, polls revealed today that beyond concerns about privacy, Americans are primarily distressed that sensitive government programs are apparently being managed by kids who were still in high school when 9/11 happened. 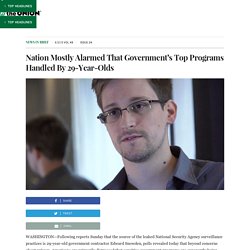 Wiretaps through Software Hacks to Get Legal Scrutiny. Earlier this year a group of researchers published a controversial idea for giving law enforcement access to suspicious electronic communications. Instead of forcing tech companies like Facebook and Google to build backdoors into their software, the researchers suggested law enforcement simply exploit existing vulnerabilities in Web software to plant their digital wiretaps.

This approach would turn security-compromising software bugs—a bane of software companies and their customers for the past couple of decades—into a tool for gathering evidence against criminals communicating via voice-over-IP (VoIP) calls, instant messaging, some video game systems and other Internet-based channels. NSA collecting phone records of millions of Verizon customers daily. The National Security Agency is currently collecting the telephone records of millions of US customers of Verizon, one of America's largest telecoms providers, under a top secret court order issued in April.

The order, a copy of which has been obtained by the Guardian, requires Verizon on an "ongoing, daily basis" to give the NSA information on all telephone calls in its systems, both within the US and between the US and other countries. The document shows for the first time that under the Obama administration the communication records of millions of US citizens are being collected indiscriminately and in bulk – regardless of whether they are suspected of any wrongdoing.

The secret Foreign Intelligence Surveillance Court (Fisa) granted the order to the FBI on April 25, giving the government unlimited authority to obtain the data for a specified three-month period ending on July 19. High-Tech NYPD Unit Tracks Criminals Through Facebook and Instagram Photos - On the Inside. View Full Caption. Tip for Julian: Don’t Eat at Popeyes. Image courtesy zigazou76. Guerrilla surveillance camera destruction hits the U.S. Cctv. Retailers Track Consumers With Facial Recognition Technology As They Shop. Understand Klout. What Your Klout Score Really Means. On the Leakiness of Surveillance Culture, the Corporate Gaze, and What That Has To Do With the New Aesthetic. How Your Movements Are Being Tracked, Probably Without Your Knowledge. August 31, 2012 | Welcome to the National Security Agency - NSA/CSS. Behavioral Recognition Systems.