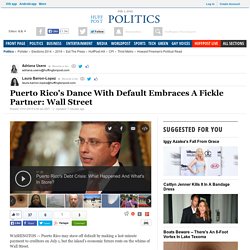 Gov. Alejandro Garcia Padilla threw investors and market-watchers for a loop Sunday when he deemed Puerto Rico “unable” to pay its debts of more than $70 billion. His comments put a spotlight on the island's troubling relationship with investors who own that debt. “One of the real issues there, and this is going to be the crux of the problem, are not only the [bond] insurers, but also some of the hedge funds that got involved," said Jon Mousseau, executive vice president at Cumberland Advisors, who spoke in Washington on Tuesday during a panel discussion about economic hardships facing Greece and Puerto Rico. “Most of the hedge funds signed non-disclosure agreements with Puerto Rico so that they can get access to data, and basically bargaining chips in return for loaning them more money," Mousseau said. Here little lady, let me tell you how banking works: Jamie Dimon mansplains to Elizabeth Warren. Prosecuting Wall Street.

Two whistleblowers offer a rare window into the root causes of the subprime mortgage meltdown. 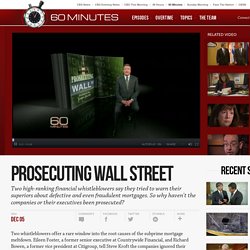 Eileen Foster, a former senior executive at Countrywide Financial, and Richard Bowen, a former vice president at Citigroup, tell Steve Kroft the companies ignored their repeated warnings about defective, even fraudulent mortgages. The result, experts say, was a cascading wave of mortgage defaults for which virtually no high-ranking Wall Street executives have been prosecuted. The following is a script of "Prosecuting Wall Street" which aired on Dec. 4, 2011. Matt Taibbi on Why Bankers Will Always Stay Out of Jail. HuffPost Live. The $9 Billion Witness: Meet JPMorgan Chase's Worst Nightmare. Must-see morning clip: Jon Stewart ridicules ex-AIG head for being a cry baby. Because there aren’t enough angering events in the world, Jon Stewart would like to call your attention to former AIG Chairman and CEO Hank Greenberg, who is suing the government because he’s unhappy with the terms of the generous $184.6 billion bail-out AIG received during the financial crisis. 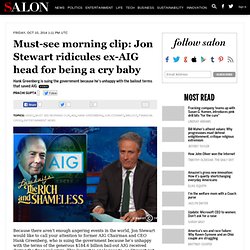 This lawsuit is analogous to, as Stewart put it, receiving CPR and complaining about your savior’s bad breath. In exchange for the bailout, the government gained a 92 percent stake in the flailing company — which Greenberg argues is too much (despite its valuation of only $15 billion, as Stewart discovers). Jon Stewart Explains The Most Outrageous Corporate Tax Dodge Yet. One percent’s rental nightmare: How Wall Street scheme blew up in its face. I’ve followed the Wall Street rental scheme for some time. 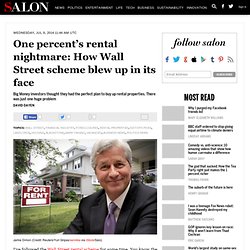 You know the basics by now: Big Money investors decided to buy up all the foreclosed properties their pals at the banks created during the financial crisis, and rent them out to many of the same people who lost their homes. Then, they started selling securities backed by the rental revenue, just like the mortgage-backed securities from the crisis. The Vampire Squid Strikes Again: The Mega Banks' Most Devious Scam Yet. 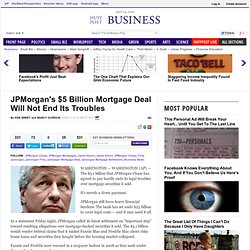 It's merely a down payment. JPMorgan still faces heavy financial burdens. The bank has set aside $23 billion to cover legal costs — and it may need it all. In a statement Friday night, JPMorgan called its latest settlement an "important step" toward resolving allegations over mortgage-backed securities it sold. The $5.1 billion would resolve federal claims that it misled Fannie Mae and Freddie Mac about risky home loans and securities they bought before the housing market collapsed. Fannie and Freddie were rescued in a taxpayer bailout in 2008 as they sank under the weight of mortgage losses. Between 2005 and 2007, JPMorgan sold $33 billion in mortgage securities to Fannie and Freddie, according to their regulator. Fannie and Freddie own or guarantee about half of all U.S. mortgages, worth about $5 trillion. JPMorgan Reaches $5.1 Billion Mortgage Deal With FHFA. JPMorgan Chase, the country's biggest bank by assets, has reached a $5.1 billion settlement with the Federal Housing Finance Agency over alleged violations related to mortgage securities it sold in the lead up to the financial crash: According to the FHFA's press release on the settlement, JPMorgan will pay $2.74 billion to Freddie Mac and $1.26 billion to Fannie Mae over problematic securities that the bank -- along with Bear Stearns and Washington Mutual -- sold to the two housing giants in the years leading up to the financial crisis. 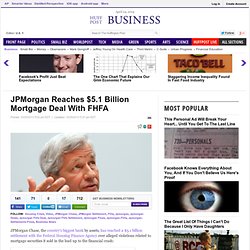 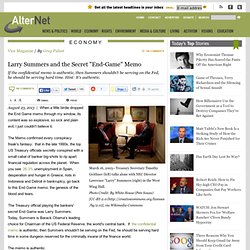 Photo Credit: By White House (Pete Souza) [CC-BY-2.0 ( via Wikimedia Commons August 23, 2013 | Like this article? Join our email list: Stay up to date with the latest headlines via email. 16 Firms May Have Gotten Early (Illegal) Market Info. The 2005 Bankruptcy Bill: Knowing a Financial Crisis Was Imminent, Banks Lobbied Government to Pass Laws to Preserve Their Wealth. Our government representatives would like us to believe that the subprime mortgage crisis(2, 3, 4, 5) could not have been predicted. 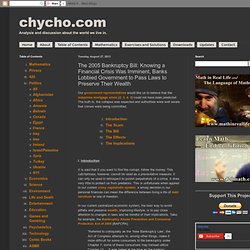 The truth is, the collapse was expected and authorities were well aware that crimes were being committed. Goldman Sachs Announces They’re Blowing Up A Nursing Home And There’s Nothing Anyone Can Do About It. NEW YORK—Executive board members of Goldman Sachs called an afternoon press conference today to announce they will be exploding a local intermediate care facility, adding that “we’re doing it, and there’s basically nothing anyone can do about it.” 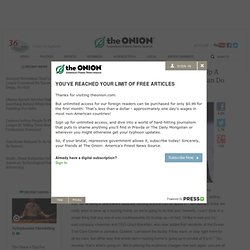 “We decided today we really want to blow up a nursing home, so we’re going to do that and, honestly, I can’t think of a single thing that any one of you could possibly do to stop us—in fact, I’d like to see you try,” said company chairman and CEO Lloyd Blankfein, who later added that residents of the Ocean Trail Care Center in Jamaica, Queens “can leave the facility if they want, or stay right there for all we care, but either way that whole damn nursing home is going up in smoke at 6 p.m.” “So, anyway, that’s what’s going on. We’re placing the explosive charges now and, again, you are all completely powerless to stop us. Billy Tauzin Rides Again, This Time Battling Against Big Pharma (UPDATE)

WASHINGTON -- When Billy Tauzin stepped down as the high-profile head of the pharmaceutical lobby in 2010, The New York Times penned his political obituary, highlighting the deal he had made with the White House that helped ease the passage of Obamacare. 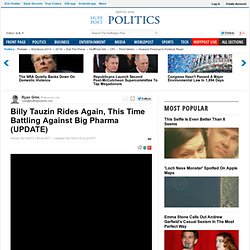 "The agreement that Mr. The Chase and Bank of America Investigations: Real Action, or More of the Same? 7 Things About Prosecuting Wall Street You Wanted to Know (But Were Too Depressed to Ask) President Obama's Justice Department, under the direction of Attorney General Eric Holder, hasn't indicted a single bank executive for the massive Wall Street crime wave that devastated the economy. The regulatory reform which followed the 2008 crisis wasn't nearly enough, and yet Republicans are trying to weaken even that. And just this week there were several news stories about bank crime. The Daily Show: Still No Accountability For the Big Banks. Goldman Sachs Has 4,000 Separate Corporate Entities and Other Facts About Multinationals You Might Not Want to Know But Probably Should Anyway. Seeking to follow the oligarchy's money, the London-based Open Data Institute has collected and mapped corporate data, much of it made public for the first time, showing the complex relationships between multinational companies and their global subsidiaries.

Stunning visuals on the corporate networks of the six biggest banks in the U.S. - Goldman Sachs, Bank of America, Morgan Stanley, Wells Fargo, Citigroup and JP Morgan - show the tangled webs they weave. ODI's Nigel Shadbolt on identifying "the extensive, complex, and sometimes opaque connections which exist amongst global corporations: Understanding their networks will enable governments, businesses and citizens to make better decisions - be they legislative, commercial, ethical or environmental. The tide has already turned towards openness. The Daily Show: You Can't Jam Banking Regulation Down a Country's Throat. The Last Mystery of the Financial Crisis. Financial Sector Thinks It’s About Ready To Ruin World Again. NEW YORK—Claiming that enough time had surely passed since they last caused a global economic meltdown, top executives from the U.S. financial sector told reporters Monday that they are just about ready to completely destroy the world again.

Representatives from all major banking and investment institutions cited recent increases in consumer spending, rebounding home prices, and a stabilizing unemployment rate as confirmation that the time had once again come to inflict another round of catastrophic financial losses on individuals and businesses worldwide. Bank of America Lied to Homeowners and Rewarded Foreclosures, Former Employees Say. Former Bank of America employees gave sworn statements that the bank lied to homeowners, denied loan modifications for bogus reasons and rewarded employees for sending homeowners to foreclosure. A customer uses an ATM at a Bank of America branch office on April 17, 2013 in San Francisco, California. Thomson Reuters Gives Elite Traders Early Advantage. Citigroup Settles FHFA Lawsuit Accusing It Of Misleading Fannie Mae, Freddie Mac.