Loads of the Blues 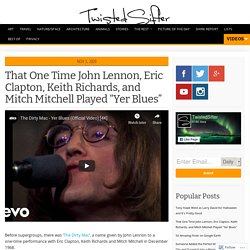 They played the Lennon Beatles composition “Yer Blues” (from The White Album) for the Rolling Stones’ TV special titled The Rolling Stones Rock and Roll Circus. Recorded before a live audience in London, the original Rolling Stones line up performed six Stones classics. The program also included extraordinary performances by The Who, Jethro Tull, Taj Mahal, Marianne Faithfull, and The Dirty Mac. The show was the first time since the formation of the Beatles that Lennon—who was still in the group—had performed in public without them, and the first time he had performed live since the Beatles’ last tour ended in August 1966. Sonny Boy Williamson II. American blues harmonica player, singer and songwriter Alex or Aleck Miller (né Ford, possibly December 5, 1912[3][a] – May 24, 1965),[4] known later in his career as Sonny Boy Williamson, was an American blues harmonica player, singer and songwriter.[2] He was an early and influential blues harp stylist who recorded successfully in the 1950s and 1960s. 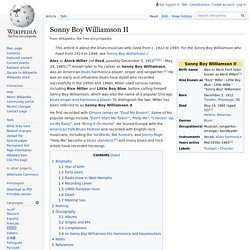 3/26/17 - Blast Furnace Blues - Bethlehem, PA. Understanding Cream. The Beatles’ ‘Yer Blues’: How John Lennon’s Trolling of Eric Clapton Birthed a Rock-and-Roll Classic. Samantha Fish - smoldering version of - I PUT A SPELL ON YOU - Samantha Fish. “You should always get outside of the box,” Samantha Fish says while discussing her boundary-breaking new album Belle of the West. 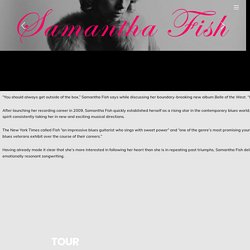 “Challenging yourself is how you grow.” After launching her recording career in 2009, Samantha Fish quickly established herself as a rising star in the contemporary blues world. Since then, the charismatic young singer-guitarist-songwriter has earned a reputation as a rising guitar hero and powerful live performer, while releasing a series of acclaimed albums that have shown her restless creative spirit consistently taking her in new and exciting musical directions. The New York Times called Fish “an impressive blues guitarist who sings with sweet power” and “one of the genre’s most promising young talents.”

Having already made it clear that she’s more interested in following her heart than she is in repeating past triumphs, Samantha Fish delivers some of her most compelling music to date with Belle of the West, her fifth studio album. That Time John Lennon, Eric Clapton, Keith Richards, and Mitch Mitchell Formed a Band. Savoy Brown - Wikipedia. Savoy Brown, originally known as the Savoy Brown Blues Band, are an English blues rock band[1] formed in Battersea, south west London[2] in 1965. 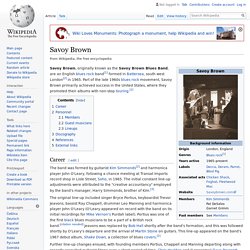 Part of the late 1960s blues rock movement, Savoy Brown primarily achieved success in the United States, where they promoted their albums with non-stop touring.[2] Career[edit] The band was formed by guitarist Kim Simmonds[2] and harmonica player John O'Leary, following a chance meeting at Transat Imports record shop in Lisle Street, Soho, in 1965. The initial constant line-up adjustments were attributed to the "creative accountancy" employed by the band's manager, Harry Simmonds, brother of Kim.[3] Following the release of Raw Sienna (also released in 1969) Youlden departed the band. Singer Dave Walker returned to the group in the late 1980s and recorded two studio albums and one live album as lead vocalist, but left the group for a second time in 1991. 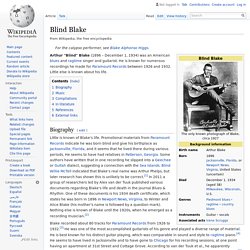 He is known for numerous recordings he made for Paramount Records between 1926 and 1932. Little else is known about his life. Biography[edit] Little is known of Blake's life. Promotional materials from Paramount Records indicate he was born blind and give his birthplace as Jacksonville, Florida, and it seems that he lived there during various periods. Blake recorded about 80 tracks for Paramount Records from 1926 to 1932.[3] He was one of the most accomplished guitarists of his genre and played a diverse range of material.

Music[edit] Blake's first recordings were made in 1926,[5] and his records sold well. The title track of Bob Dylan's 1992 album Good As I Been to You is a cover of Blind Blake's "You Gonna Quite Me Blues. " The French singer-songwriter Francis Cabrel refers to Blake in the song "Cent Ans de Plus", on the 1999 album Hors-Saison.