In our own Backyard

The Voyager 1 probe is now so far away that it can hear the background 'hum' of interstellar space - Raw Story - Celebrating 17 Years of Independent Journalism. The Voyager 1 spacecraft holds the record for the most distant human-made object to ever exist. 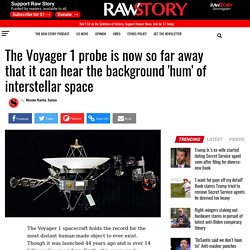 Though it was launched 44 years ago and is over 14 billion miles away from Earth, this space probe continues to send critical information and data back to Earth even as it floats through the void between our solar system and the next. This article was originally published at Salon. Stunning new video reveals Solar Orbiter's view of Earth, Mars, and Venus. For nearly a year, a small spacecraft has been making its way toward the Sun in order to capture the closest images of our host star ever taken. 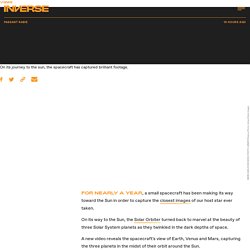 A Map of Every Object in Our Solar System - Visual Capitalist. View the high-resolution of the infographic by clicking here. 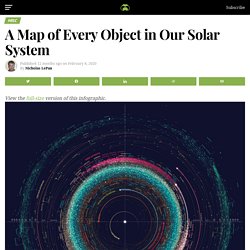 Ever since Apple and other Big Tech companies hit a market capitalization of $1 trillion, many sectors are revving to follow suit—including the automotive industry. But among those car brands racing to reach this total valuation, some are closer to the finish line than others. Through the eyes of a robot, scientists see an asteroid in unprecedented detail. On February 21, 2019, Japanese astronomers performed a theft that made history. 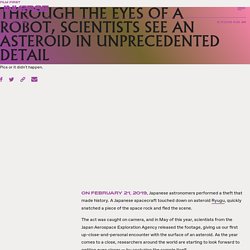 A Japanese spacecraft touched down on asteroid Ryugu, quickly snatched a piece of the space rock and fled the scene. The solar minimum: A reasonable explanation based on science (not hysteria) The Sun is a busy star. 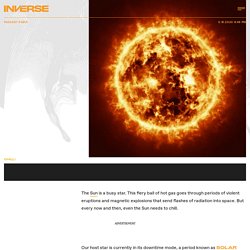 This fiery ball of hot gas goes through periods of violent eruptions and magnetic explosions that send flashes of radiation into space. But every now and then, even the Sun needs to chill. Our host star is currently in its downtime mode, a period known as solar minimum. However, this current lack of activity from the Sun has some worried that it will lead to a dark, cold summer with possible famine, war — and even volcanoes. So, what exactly is a solar minimum? The Earth's Rotation Is Breathtakingly Captured In This Time Lapse Of The Milky Way. Something Big Just Slammed Into Jupiter. Caged gas blanket may explain why Pluto’s oceans are liquid. Something Weird Is Going on With New Horizons' Next Target. Early Returns from Bennu. The science return from OSIRIS-REx has been surprisingly swift as the spacecraft returns data on near-Earth asteroid 101955 Bennu. 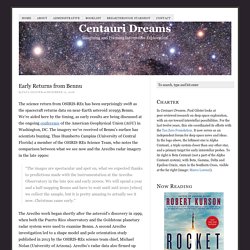 We’re aided here by the timing, as early results are being discussed at the ongoing conference of the American Geophysical Union (AGU) in Washington, DC. The imagery we’ve received of Bennu’s surface has scientists buzzing. Thus Humberto Campins (University of Central Florida) a member of the OSIRIS-REx Science Team, who notes the comparison between what we see now and the Arecibo radar imagery in the late 1990s: “The images are spectacular and spot on, what we expected thanks to predictions made with the instrumentation at the Arecibo Observatory in the late 90s and early 2000s. We will spend a year and a half mapping Bennu and have to wait until mid 2020 [when] we collect the sample, but it is pretty amazing to actually see it now. 6 Strange Facts about the Interstellar Visitor 'Oumuamua.

On October 19, 2017, the first interstellar object, ‘Oumuamua, was discovered by the Pan-STARRS survey. 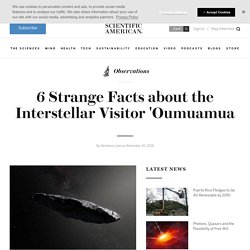 The experience was similar to having a surprise guest for dinner show up from another country. By examining this guest, we can learn about the culture of that country without the need to travel there—a good thing in this case, given that it would take us a hundred thousand years to visit even the nearest star using conventional chemical rockets. Surprisingly, our first interstellar guest appeared to be weird and unlike anything we have seen before. By the time we realized it, the guest was already out the door with its image fading into the dark street, so we did not have a chance to get a second look at its mysterious qualities.

Below is a list of six peculiarities exhibited by ‘Oumuamua: Something Violent Happened to Our Solar System's First Interstellar Visitor. An interstellar object called 'Oumuamua has confounded astronomers ever since it passed through our solar system in October of last year. 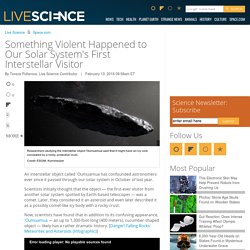 Scientists initially thought that the object — the first-ever visitor from another solar system spotted by Earth-based telescopes — was a comet. Later, they considered it an asteroid and even later described it as a possibly comet-like icy body with a rocky crust. Now, scientists have found that in addition to its confusing appearance, 'Oumuamua — an up to 1,300-foot-long (400 meters), cucumber-shaped object — likely has a rather dramatic history. [Danger! Falling Rocks: Meteorites and Asteroids (Infographic)] The sun has gone wrong and scientists don’t know why. This article was originally published on The Conversation. 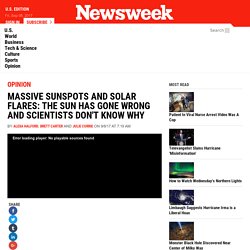 Read the original article. If you still have your solar viewing glasses from the eclipse, now is a good time to slap them on and look up at the sun. You’ll see two big dark areas visible on our star. These massive sunspots are regions of intense and complicated magnetic fields that can produce solar flares—bursts of high-energy radiation. Physicists discover ozone layer on distant exoplanet. A giant planet that orbits close to its sun is called a ‘hot Jupiter.’ 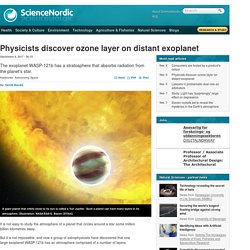 Such a planet can have many layers in its atmosphere. NASA Spacecraft Gets Up Close With Jupiter's Great Red Spot. Artist's impression of Jupiter's Great Red Spot heating the upper atmosphere. Karen Teramura with James O'Donoghue and Luke Moore/NASA hide caption toggle caption Karen Teramura with James O'Donoghue and Luke Moore/NASA. Jupiter Is Much Stranger Than Scientists Thought - The Atlantic. About every eight weeks, hundreds of millions of miles away, a basketball court-sized spacecraft named Juno swoops toward Jupiter. For a few hours, Juno loops around the planet’s poles at high speed, sometimes getting within 2,100 miles of its atmosphere. It surveys Jupiter’s swirling, opaque cloud tops, and then gets flung out to the other edge of its orbit, beyond Callisto, the planet’s cratered moon.

Jupiter is surrounded by a massive magnetic field that produces belts of radiation capable of frying Juno if it wasn’t wearing 400 pounds of protective titanium. NASA to Explore an Asteroid Containing Enough Mineral Wealth to Collapse the World Economy. We think of asteroids as giant useless rocks floating around space. Perhaps it’s a good place to hide the Millennium Falcon or a worrisome cause of a cataclysmic event. Though most are hunks of rock or ice, some are replete with iron, platinum, gold, and other precious minerals. Two NASA missions plan to explore such an asteroid, scheduled for 2021 and 2023. These are part of NASA’s Discovery Program, a class of mission considered inexpensive, capping out at $450 million apiece. Scientists will first launch a robotic spacecraft named Lucy in October 2021. See What the Huygens Spacecraft Saw When it Landed on Titan. ESA/NASA/JPL/University of Arizona Perhaps the most exciting part of the Cassini spacecraft's 12-and-a-half years orbiting Saturn was back in December 2004, when the mothership deposited the European Space Agency's Huygens probe.

Twenty days later, in January 2005, Huygens became the first spacecraft to land on an object in the outer solar system. Scientists Find Hints Of A Giant, Hidden Planet In Our Solar System. The imagined view from Planet Nine back toward the sun. Astronomers think the huge, distant planet is likely gaseous, similar to Uranus and Neptune. Caltech/R. Rosetta discovers active sinkholes on 67P. Pluto's wobbly moons dance to a chaotic tune.

Pluto and its largest satellite Charon are an odd pair. Stunning New Photo Of Europa Shows Jupiter's Icy Moon Just As The Human Eye Would See It. Philae makes historic first landing on comet. Photo Shows Lander Sitting On Comet After Bounce-Landing. 'Singing Comet' Detected By Rosetta Is Pure Science Weirdness. Comet Pan-STARRS is seen over the tower on the left as a 1 day waxing crescent Moon is seen setting in the Western sky on Tuesday, March 12, 2013. Homepage DD1US / Sounds from Scientific, Meteorological and Commercial Satellites. Rosetta discovers comet smells like rotten eggs and horse poo. Comets may be deep-frozen fossils that could provide clues as to the earliest days of the Solar System, but what does one smell like? Not very nice, says ESA, whose Rosetta space probe has discovered that comet 67P/Churyumov–Gerasimenko (67P/C-G) has the aroma of rotten eggs and horse dung.

Astronomers get their first close look at dwarf planet Makemake.