How He Used Facebook to Win. Prototype Politics: Technology-Intensive Campaigning and the Data of Democracy by Daniel Kreiss Oxford University Press, 291 pp., $99.00; $27.95 (paper) Hacking the Electorate: How Campaigns Perceive Voters by Eitan D. 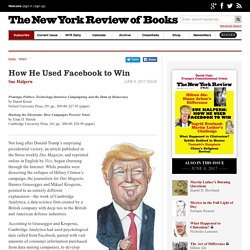 America’s Mad Rush to the Bottom. US foreign policy is the country’s Achilles heel. 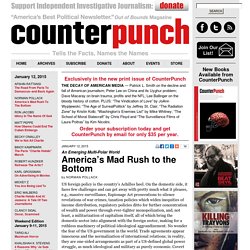 On the domestic side, it faces few challenges and can get away with pretty much what it pleases, e.g., massive surveillance, Espionage Act prosecutions to silence revelations of war crimes, taxation policies which widen inequities of income distribution, regulatory policies ditto for further concentration of wealth and power through ever-tighter monopolization, and, not least, a militarization of capitalism itself, all of which bring the domestic sector into alignment with the foreign sector, making for a ruthless machinery of political-ideological aggrandizement. No wonder the fear of the US government in the world.

Trade agreements appear innocuous and the normalization of international relations; in reality, they are one-sided arrangements as part of a US-defined global power struggle, as much ideological and military as purely economic. The America of 'Team America,' a Decade Later. As the geopolitical satire turns 10, it reminds of how much the world has and hasn't changed. 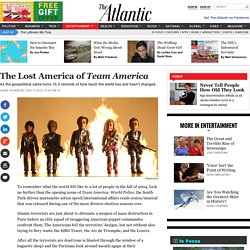 Paramount To remember what the world felt like to a lot of people in the fall of 2004, look no further than the opening scene of Team America: World Police, the South Park-driven marionette action spoof/international affairs crash course/musical that was released during one of the most divisive election seasons ever. Islamic terrorists are just about to detonate a weapon of mass destruction in Paris before an elite squad of swaggering American puppet commandos confront them.

Last Week Tonight with John Oliver: Nuclear Weapons (HBO) Step Away, Do Nothing, Pat Self on Back. Most people probably think of Israeli Prime Minister Benjamin Netanyahu as a pugnacious hawk. 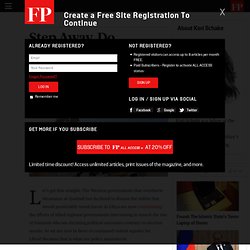 In interviews with the media, his stern baritone insists on the dire threats to Israel's security. He has warned that he will unilaterally bomb Iran's nuclear facilities if Tehran crosses a "red line. " Before his political career, he was respected in Israel as a commander of special-forces overseas operations. The Gaza conflict over the past month and a half seems to have only solidified Bibi's image: Israeli forces have conducted extensive airstrikes against military targets in Gaza, and the Israel Defense Forces have undertaken audacious operations to undo Hamas's network of tunnels into Israel. The Top 10 Questions About the World's Biggest Problems. When it comes to U.S. 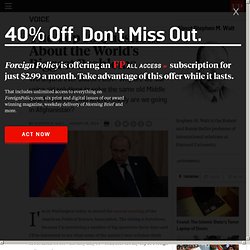 Mideast policy, Martin Indyk is something like a human seismograph. Having spent three and a half decades at the leading edge of U.S. policy in the region, the English-born, Australian-raised Indyk has grown acutely sensitive to the shifts, tremors, and upheavals that have signaled change across the Middle East. Indyk has twice served as America's ambassador to Israel, is a former U.S. assistant secretary of state for Near East affairs, and most recently has played the role of U.S. special envoy for Israeli-Palestinian negotiations. He remains an advisor to U.S. Secretary of State John Kerry on these issues. Old World Order vs. New World Order: The Geopolitics of Chaos and Stochastic Change. 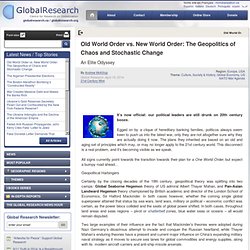 Egged on by a clique of hereditary banking families, politicos always seem keen to push us into the latest war, only they are not altogether sure why they are actually doing it now. The plans they inherited are based on an old and aging set of principles which may, or may no longer apply to the 21st century world. This disconnect is a real problem, and it’s becoming visible as we speak.All signs currently point towards the transition towards their plan for a One World Order, but expect a bumpy road ahead… 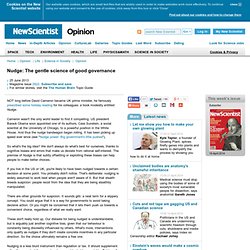 Cameron wasn't the only world leader to find it compelling. US president Barack Obama soon appointed one of its authors, Cass Sunstein, a social scientist at the University of Chicago, to a powerful position in the White House. SPONSORED: The Taliban Is A Vibrant And Thriving Political Movement. Never underestimate the power of confusion. Noam Chomsky: Why America and Israel Are the Greatest Threats to Peace. September 3, 2012 | Like this article? 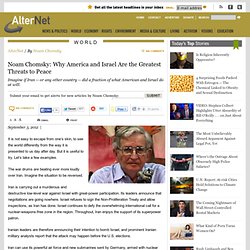 Join our email list: Stay up to date with the latest headlines via email. It is not easy to escape from one’s skin, to see the world differently from the way it is presented to us day after day. But it is useful to try. The war drums are beating ever more loudly over Iran. Iran is carrying out a murderous and destructive low-level war against Israel with great-power participation. Iranian leaders are therefore announcing their intention to bomb Israel, and prominent Iranian military analysts report that the attack may happen before the U.S. elections. Iran can use its powerful air force and new submarines sent by Germany, armed with nuclear missiles and stationed off the coast of Israel.

Objectivism (Ayn Rand) Objectivism is a philosophical system that originated as the personal philosophy of Russian-born American writer Ayn Rand (1905–1982).[1] First developed in her novels and polemical essays,[2] it was later given more formal structure by her designated intellectual heir,[3] philosopher Leonard Peikoff, who characterizes it as a "closed system" that is not subject to change.[4] Academia has generally ignored or rejected her philosophy, but it has been a significant influence among libertarians and American conservatives.[5] The Objectivist movement, which Rand founded, attempts to spread her ideas to the public and in academic settings.[6] Rand originally expressed her philosophical ideas in her novels The Fountainhead and Atlas Shrugged, and other works. 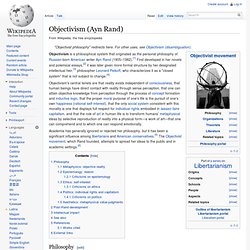 She further elaborated on them in her periodicals The Objectivist Newsletter, The Objectivist, and The Ayn Rand Letter, and in non-fiction books such as Introduction to Objectivist Epistemology and The Virtue of Selfishness.[7] Libertarianism. Socialism. Socialism is a social and economic system characterised by social ownership of the means of production and co-operative management of the economy,[1][2] as well as a political theory and movement that aims at the establishment of such a system.[3][4] "Social ownership" may refer to cooperative enterprises, common ownership, state ownership, citizen ownership of equity, or any combination of these.[5] There are many varieties of socialism and there is no single definition encapsulating all of them.[6] They differ in the type of social ownership they advocate, the degree to which they rely on markets or planning, how management is to be organised within productive institutions, and the role of the state in constructing socialism.[7] The socialist political movement includes a diverse array of political philosophies. 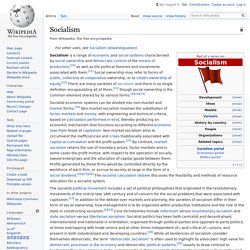 Core dichotomies within the socialist movement include the distinction between reformism and revolutionary socialism and between state socialism and libertarian socialism. Www.fas.org/sgp/crs/secrecy/R42681.pdf. The Decline of Political Protest. Paris. Once upon a time there was an organization called Amnesty International which was dedicated to defending prisoners of conscience all over the world. Its action was marked by two principles that contributed to its success: neutrality and discretion.

In the context of the Cold War, the early AI made a point of balancing its campaigns between prisoners from each of three ideological regions: the capitalist West, the communist East and the developing South. The campaigns remained discreet, avoiding ideological polemics and focusing on the legal and physical conditions of captives. On Translating Securityspeak into English. One might wonder, reading the American “national security” community’s pronouncements, if they refer to the same world we live in. Things make a little more sense when you realize that the Security State has its own language: Securityspeak.

Like Newspeak, the ideologically refashioned successor to English in Orwell’s “1984,” Securityspeak is designed to obscure meaning and conceal truth, rather than convey them.