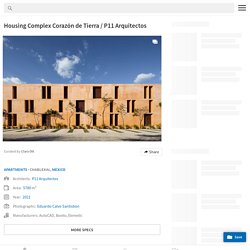 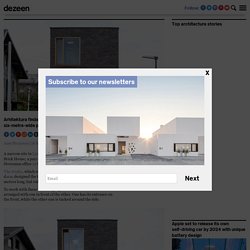 The studio, which recently changed its name from Arhitektura d.o.o, designed the two connected residences for a plot that is 30 metres long, but only six metres wide. Andres alonso occupies 'la inecita' with six dwellings in argentina. ZAV architects builds a village of domes on iran's hormuz island. Peter Barber Architects creates terrace of social housing in south London. London studio Peter Barber Architects has created a terrace of social housing for Greenwich council on a tight site in south London that was previously occupied by garages. 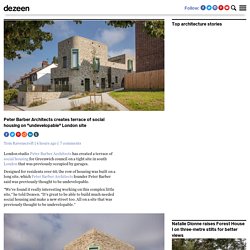 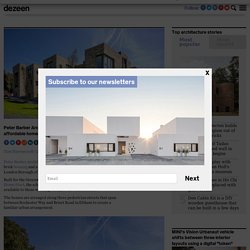 Built for the Greenwich-council owned developer Meridian Home Start, the scheme consists of 29 homes that will be available to those working locally at discounted rents. The homes are arranged along three pedestrian streets that span between Rochester Way and Briset Road in Eltham to create a familiar urban arrangement. "Seventy per cent of all the buildings in London are housing," explained Peter Barber Architects founder Peter Barber.

"Housing is what our city is made of. Simple projects architecture designs light-filled micro housing complex in indonesia. The History of Reykjavik's Iron and Wood Homes. Photographer: bpperry/iStock Editorial via Getty Images (This story is part of an ongoing series on the home designs that define cities. 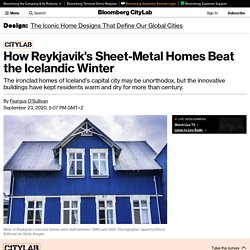 Read more here about iconic floor plans in Hanoi, Brussels, Athens, Sydney, Singapore, London, Berlin, Amsterdam and Paris. Follow our Storythread to have future installments delivered to your inbox.) For the first-time visitor, Reykjavik is a surprising place. It’s not just the city’s seasonal extremes of daylight and darkness, the spectacularly changeable weather or the craggy profile of Mount Esja looming over everything. Streets in Reykjavik’s downtown are often lined with rugged, cottage-like timber-framed houses clad top to bottom in a material that (roofs aside) is used elsewhere almost exclusively for industrial, non-domestic purposes: corrugated sheet metal.

This reflection needn’t belittle either Reykjavik or Iceland’s built environment. By the 19th century, the country’s tiny middle and upper class had a better, if equally unusual option. Modular dwelling proposal could provide solution to the rural sub-saharan africa housing crisis. London-based architects georgios lazaridis, chrisa gergou and danai tzima maniati have completed a housing proposal aiming to accommodate the big, growing jorejick family in tanzania. the project comes as part of a competition conducted by archstorming and envisions a modular residential solution to contain the vibrant lives, habits and needs of the family. view of the communal exterior, ‘in-between’ space all images courtesy of georgios lazaridis, chrisa gergou and danai tzima maniati the main pillar of the design proposal by lazaridis, gergou and tzima maniati is the production of a generic space that will eventually reflect the family’s life and character. it is an environment that promotes the discovery of a multitude of uses and experiences. considering the fact that most of the family members’ life and activities take place outside, a number of fluid living clusters were created and got carefully distributed along the plot. 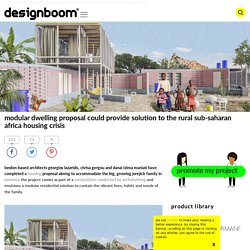 BC architects works with the local community to build 'the women's house' in morocco. In ouled merzoug, a small village near the atlas mountains of morocco, BC architects has collaborated with local women and craftsmen to create a place for meeting, working and learning. it all began when a piece of land was offered by the community to the recently founded women’s association AFOM (association des femmes d’ouled merzoug). organized by hasselt university for the postgraduate program building beyond borders, the project explores the limits of sustainable building by maximizing the use of local and regenerative materials, while bridging the gap between traditional and contemporary construction techniques. entering the heart of the women’s house, image © thomas noceto the heart of the building, image © thomas noceto the façade of the ‘atelier’ building and the terraced garden, image © thomas noceto women enjoying the view from the ‘atelier’ garden, image © jolien bosmans the garden of the ‘boulangerie’ and communal cob oven, image © thomas noceto project info: 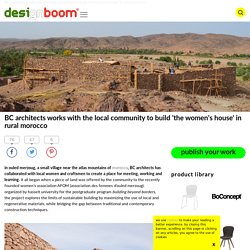 Someone Reinvented the Futuro House and put it on Airbnb. Two modern homes packed into one narrow lot in Toronto. A new project in Toronto aims to hit a sweet spot between a single-family home and high-density housing by building two units on a narrow plot of land—one for the owners and another for renting out. 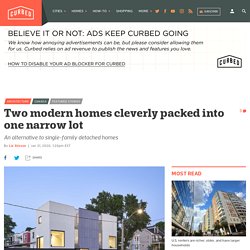 Peter McNeil and Clarissa Nam of COMN Architects designed the Semi Semi house for their family, and used the project as a way to explore how single-family housing could be more affordable. ”In the City of Toronto, single-family detached homes have become out of reach for many, and intensification [densification] efforts have come mainly in the form of high-rise condominiums,” the architects explain. “There is a lack of medium density, ground-related housing options, often referred to as the ‘missing middle.’” Iosa Ghini Associati counters Moscow's "monotony" with brightly coloured apartment blocks. Italian architecture studio Iosa Ghini Associati has worked with Russian firm Mosproekt-3 to complete 47 high-rise buildings clad with colourful panels on the outskirts of Moscow. 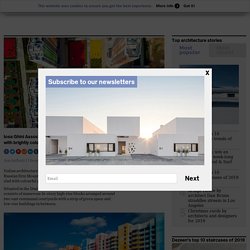 Situated in the Dmitrovskoe Shosse district, the development consists of numerous 16-story high-rise blocks arranged around two vast communal courtyards with a strip of green space and low-rise buildings in between. While Mosproekt-3 dealt with the technical aspects of the buildings, Iosa Ghini Associati was approached to develop the design of the facades and landscaping. The coloured street frontages and courtyards were created to counter what the studio call a sense of "monotony" in the suburbs. According to the studio they are combined with communal outdoor areas and play spaces to bring a more "human feel" to the scheme. For the external spaces, areas were divided to suggest different uses, with a network of pathways and bike lanes providing routes both through the district and further afield. Francisco pardo develops a social housing prototype for rural mexico. As part of a research program to explore housing types for rural mexico, francisco pardo arquitecto has designed the ‘apan prototype’. the initiative, which is called ‘del territorio al habitante’ (from the territory to the inhabitant), invites proposals from various local architects on a site located in the city of apan. realized among 32 other designs, francisco pardo’s intervention embraces the notion of versatility to create a modest residence that can be self-built and adapted according to the changing needs of a family. image © jaime navarro project info: 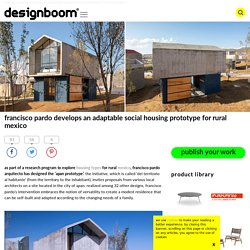 Hub_01 thinks outside the box for sustainable student housing. Thinking outside the box, KATHO Catholic University in Courtrai, Belgium, has developed a modular and mobile student housing prototype that will have many wanting to return to the books. Gone are the days of pokey dorm rooms, grimy communal kitchens and substandard shared bathrooms, as this student residence features state-of-the-art facilities. Designed by architectural studios dmvA Architecten and A3 Ontwerpburo, Hub_01 boasts several modern flexible living zones and private mobile "sleeping units" that students can take with them as they complete their education.

View all “Focusing on both flexible and mobile living and learning, the student dig of the future personifies the idea of learning at any time, in any place and in every way,” says the Hub_01's creators. “In fact we designed a sustainable and innovative pavilion that hopefully inspires education, teachers and students to innovate their learning process. Hub_01 private student residence module. Cantilevered residential heliostat takes shape in Sydney. A major urban redevelopment is taking place in Sydney, Australia, as it attempts to become one of the word’s most liveable green cities within a 20-year time-frame as part of the “Sustainable Sydney 2030” vision. One remarkable inner city project passed a major milestone this month as part of its contribution to the eco plan. The development, named “One Central Park,” had its 110-tonne (121-ton) steel heliostat frame hoisted into place during the early hours of February 1st.

View all Designed by French architect Jean Nouvel, the cantilever platform sits at a height of one hundred meters (328 ft) on the 29th floor of one of the twin towers planned at the site and will become Australia’s first heliostat (a feature usually associated with solar power plants these days) in a residential setting. In addition, the development plans car sharing programs, pedestrian paths and cycleways to reduce traffic. Reinventing the American Row House in Houston, Texas. Older Reinventing the American Row House in Houston, Texas by Alexa Hotz Issue 64 · Loft Living · March 18, 2013 Newer Issue 64 · Loft Living · March 18, 2013 Share on email.

How Kiyoshi Izumi Built the Psych Ward of the Future by Dropping Acid. Photo via Flickr / CC. He walked into a warp. As Kiyoshi "Kiyo" Izumi toured a select few of post-war Saskatchewan's aging mental hospitals, absorbing the wards' layouts and interviewing patients along the way, the Canadian architect grappled with hallmark features of the 1950s-era clinical milieu.

Otherwise neutral accoutrements flung him into a centripetal mindfuck. Brute force collaborativea new approach to affordable urban living? » brute force collaborative. Despite the fact that we love where we live and have ridiculously awesome landlords, we (Mike and Heather) have been debating the stay v. buy v. build bug for a while. And while we’d love to just jump right into it and build a Passivhaus, we’ve a few hesitations. For starters, a weak economy that led to a plethora of architectural layoffs. The thought of buying an old house and scraping it off to build a new PH doesn’t seem… overly sustainable – and renovating a house doesn’t appeal to me, as I’d prefer to be hanging w/ the fam. We consider ourselves urbanists and have entertained the idea of small scale multifamily. So I was exploring alternatives to the typical models (developer-driven or self-developed) and had an epiphany. Actually, to claim it was an epiphany is only half correct – the idea of forming baugruppen (building groups) has been on my mind for quite some time.

One thing I really like about baugruppen is the instantaneous/intentional community. I want to live in a baugruppe. If you could create your perfect living situation, what would it look like? Right now most people’s choices are limited to single-family homes, apartments, or condos. The Architect Is In: A New York Remodel by Way of Belgium: Remodelista. Older. Casa Futebol concept would turn World Cup Stadiums into low-cost housing. Viennese squeeze: CJ5 house offers slim solution to urban density. $4,000 home promises affordable housing in Vietnam. The S House, by Vo Trong Nghia Architects (Photo: Hiroyuki Oki) Image Gallery (27 images) Glass-encased Maintenance-Free House is built to last. Danish developers Realdania BYG and Arkitema Architects, working with the Danish Technological Institute, have designed and constructed an experimental prefabricated home that's made primarily from plywood.

Despite this, the Maintenance-Free House shouldn't need any significant maintenance for at least 50 years, thanks to a glass "shield" that keeps it safe from the elements. Vertical Forest: An Urban Treehouse That Protect Residents from Air and Noise Pollution. Foundations laid for Zaha Hadid's One Thousand Museum. Construction work has begun in earnest on Zaha Hadid's One Thousand Museum – a 62 story, "Six Star" luxury residential skyscraper in Miami that will offer impressive views over Biscayne Bay. The project is expected to be completed in 2017. World’s second vertical forest by Stefano Boeri will rise in Switzerland. Hexagonal vertical village in Singapore crowned World Building of the Year. Isay weinfeld unveils jardim residential development. Paleko + plazma nestles wooden housing development in a lithuanian nature reserve. OJT develops staggered starter home* project in new orleans.