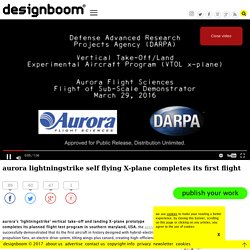 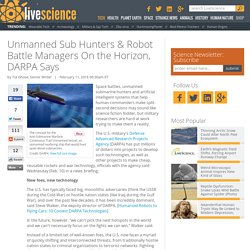 The U.S. military's Defense Advanced Research Projects Agency (DARPA) has put millions of dollars into projects to develop such technologies, as well as other projects to make cheap, reusable rockets and war technology, officials with the agency said Wednesday (Feb. 10) in a news briefing. New foes, new technology The U.S. has typically faced big, monolithic adversaries (think the USSR during the Cold War) or hostile nation states (like Iraq during the Gulf War), and over the past few decades, it has been incredibly dominant, said Steve Walker, the deputy director of DARPA. [Humanoid Robots to Flying Cars: 10 Coolest DARPA Technologies] "We need to mix it up," Walker said. Robot and man. DARPA's fascinating self-healing body initiative – ElectRx. DARPA is examining health on a nano scale through its electrical prescriptions (ElectRx) program. 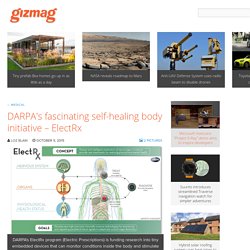 The human body obviously has an amazing capacity to correct problems in its own system. There’s a huge range of conditions that we have the built-in ability to cure ourselves of, and DARPA plans to tap into this ability with ElectRx. To understand the ElectRx program, first imagine the cardiac pacemaker – a device which delivers targeted electric shocks to the muscles of the heart to stimulate it to beat at a normal rate. Now, imagine a device far tinier, that could be delivered through a needle. This device could be designed to constantly monitor certain conditions in the body, and then directly stimulate certain nerve pathways to trigger the body’s correct response mechanism when it’s not working as it should be.

DARPA is testing implanting chips in soldiers’ brains. UPDATE: DARPA responded to a request from Fusion that “brain-neural interfaces” have not yet been implanted in soldiers, though test devices have been implanted in the brains of volunteers already undergoing brain surgery. 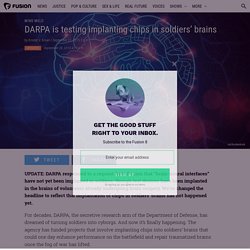 We’ve changed the headline to reflect that implantation of chips in soldiers’ brains has not happened yet. For decades, DARPA, the secretive research arm of the Department of Defense, has dreamed of turning soldiers into cyborgs. And now it’s finally happening. The agency has funded projects that involve implanting chips into soldiers’ brains that could one day enhance performance on the battlefield and repair traumatized brains once the fog of war has lifted. “Of the 2.5 million Americans who served in Iraq and Afghanistan, 300,000 of them came home with traumatic brain injury,” journalist Annie Jacobsen told NPR. TALONS effectively gives ships of all sizes skyscraper-tall masts. Warships are only as effective as far as they can see, so DARPA's Towed Airborne Lift Of Naval Systems (TALONS) research effort is aiming to extend their horizons by giving them a crow's nest 1,500 ft (457 m) tall by way of a towed parafoil. 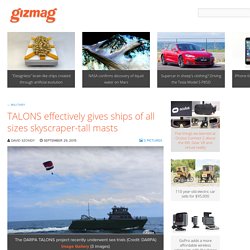 A TALONS prototype recently completed sea trials off the US East Coast as part of a project to provide ships of every size with better long-distance communications and situational awareness. When ships made the switch from sails to steam power it seemed the days of ship masts were numbered. However, masts carry more than canvas, so most vessels of any size today use masts to carry radar, antennae, and other equipment – and the masts on warships are especially tall.

Gremlins in the works: DARPA's vision for future air operations. The United States boasts some of the most advanced multi-mission combat aircraft in the world, but this can be a liability as well as an asset. 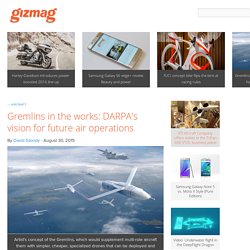 True, each aircraft can outperform an entire squadron of a few decades ago, but they're also very expensive, incredibly complex, and not exactly expendable. For these reasons DARPA has launched the Gremlins program, which aims to develop swarms of cheaper, smarter aircraft that can be deployed and collected in midair. Despite gaining popularity in the 1980s through the movie of the same name, the term "gremlins" was originally RAF slang for mischievous creatures that plagued airmen by causing all sorts of mechanical mishaps. DARPA tests its self-steering bullets against moving targets. The new footage shows both expert and novice shooters hitting moving targets (Image: DARPA) Image Gallery (2 images) DARPA has conducted a new test of its self-steering bullets, showing off their ability to hit moving targets. 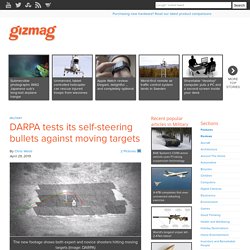 The testing further demonstrates the effectiveness of the projectile, which was developed under the Extreme Accuracy Tasked Ordnance (EXACTO) program, with both experienced and novice shooters successfully hitting their marks. The agency has previously revealed that its self-steering bullets make use of a real-time guidance system that tracks the chosen target, with the projectile changing path during flight to home in on its mark. Past that, DARPA is keeping quiet on how the technology actually works. DARPA looks at "system of systems" to maintain US air superiority. Modern warfare is a constant arms race of measures and countermeasures, but with development cycles taking decades and costing billions of dollars, it's not uncommon for military technology to become obsolete by the time it's deployed. 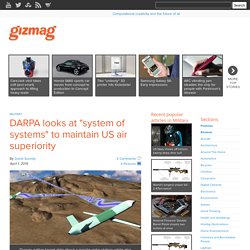 To address this dilemma, DARPA's System of Systems (SoS) Integration Technology and Experimentation (SoSITE) program aims at replacing monolithic weapon systems with a more flexible cross-platform approach. Imagine a near-future conflict where a US fighter plane is approaching a hostile anti-aircraft missile unit. Instead of being part of a squadron of near-identical aircraft, the fighter is acting as a command and control platform followed by a transport plane acting as a weapons carrier, which can deploy recoverable drones and inexpensive munitions, such as simple cruise missiles. DARPA thinks it has a solution to Ebola (and all other infectious diseases) Saving the world from Ebola suddenly sounds so simple, as the solution spills from Colonel Dan Wattendorf’s mouth, up on the stage in the windowless banquet hall of this Marriott hotel south of San Francisco. 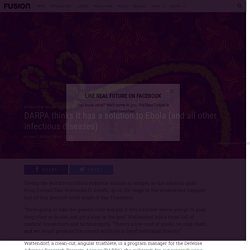 “We’re going to take the genetic code and put it into a format where you go to your drug store or doctor and get a shot in the arm,” Wattendorf told a room full of medical researchers and technologists. Human Traffickers Caught on Hidden Internet. DARPA to investigate the potential of airborne aircraft carriers. Large military aircraft, such as the C-130 transport pictured above, could be converted to launch and recover multiple UAVs (Photo: Shutterstock) Image Gallery (2 images) DARPA has submitted a request for information on how to turn existing military aircraft into "aircraft carriers of the sky. 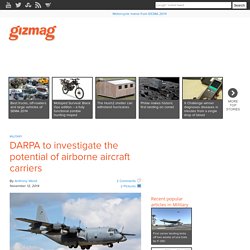 " DARPA seeks high-tech alternatives to armor. As a quick visit to any armored division will make obvious, tanks are big ... really big. A Challenger 2 main battle tank, for example, weighs 62.5 tonnes (68.9 tons) and costs about £4.2 million (US$7 million). And as anti-tank weapons get better, tanks can only get bigger. DARPA wants to develop electronic memory-restoring implants. Earlier this year, we heard about how DARPA (the Defense Advanced Research Projects Agency) was setting up its new Biological Technologies Office. The goal of that division is to "merge biology, engineering, and computer science to harness the power of natural systems for national security. " This week, the agency released details of one of the office's key projects, called Restoring Active Memory. It's aimed at using implantable "neuroprosthetics" to help army veterans and other people recover from memory deficits caused by brain injury or disease.

DARPA has already partnered with the University of California, Los Angeles and the University of Pennsylvania on the project. It will provide UCLA and Penn with research funds of up to US$15 million and $22.5 million respectively, plus it will also pay the Lawrence Livermore National Laboratory up to $2.5 million to develop UCLA's device. Our Work. 2014/05/27 Journey of Discovery Starts toward Understanding and Treating Networks of the Brain. May 27, 2014 SUBNETS program includes two complementary research pathways that emphasize neural plasticity and single-neuron recording. DARPA awards Phase 1 contracts for VTOL X-Plane program. Helicopters and other rotorcraft are impressive bits of technology, but the only place where they match the performance of fixed-wing aircraft is in bad 1980s television.

That may soon change with DARPA announcing the selection of four companies to compete in the next phase of its Vertical Take Off and Landing Experimental Plane (VTOL X-Plane) program. The four companies are tasked with developing unmanned demonstrator aircraft designed to increase the performance of VTOL rotor aircraft while reducing their complexity. View all Rotorcraft can move in any direction, hover, and land on almost any flat surface. The problem is their performance is painfully limited with top speeds for operational craft below 150 kt (172 mph, 278 km/h). The four companies chosen by DARPA to go forward with designing the new demonstrator aircraft are Aurora Flight Sciences, Boeing, Karem and Sikorsky. DARPA Publishes Huge Online Catalog of Open Source Code. The Defense Advanced Research Projects Agency (DARPA) — the branch of the U.S. Department of Defense responsible for developing new, cutting-edge technologies for the military — is shedding some of its secrecy by making all of its open-source code freely and easily accessible online.

This week, the agency launched the DARPA Open Catalog, an online database of open-source software, publications, and other data, from public DARPA-funded projects. The catalog will function as a way for DARPA to organize and share results from the agency's research efforts, according to DARPA officials. The database will likely be of particular interest to the research and development community, and DARPA is hoping the move will spur innovation and lead to new collaborations in the future. "Making our open source catalog available increases the number of experts who can help quickly develop relevant software for the government," Chris White, DARPA program manager, said in a statement. DARPA developing giant folding space telescope. DOD pushes development of cheap, portable brain-reading device.

DARPA proposes flexible new unmanned vehicle network. DARPA developing digital airstrikes. Darpa Robotics Challenge: the search for the perfect robot soldier. DARPA challenges virtual robots before the real ones step in. Remote controlled beetle by DARPA. DARPA's new 1.8-gigapixel camera is a super high-resolution eye in the sky. DARPA investigating self-destructing electronics. DARPA To Test Planes With Lasers by 2014. Darpa Searches for Life's Master Clock. There’s a hidden clock that underlies every process of every living thing — from when our cells start dividing to how quickly we age. Researchers at Darpa, the Pentagon’s extreme science agency, believe they can find it, using a mash-up of biology, code-cracking, mathematics and computer science. If the effort succeeds — and, boy, is that a big if — the recently announced Biochronicity program could help us understand why cancer is so hard to beat, how stem cells self renew and why cells are programmed to die.