Digest. Legend of Zelda sound effects by HelpTheWretched. Seven Deadly Sins - Nanatsu no Taizai Wiki - Wikia. The Seven Deadly Sins「七つの大罪 Nanatsu no Taizai」 were the strongest and cruelest order of Holy Knights in the kingdom of Liones, which was formed by seven brutal criminals, who had all been convicted for grievous crimes and had carved the symbols of seven beasts onto their bodies.[1] After having been framed for murdering the Great Holy Knight[2], they were indefinitely disbanded[3], branded as traitors and villains. 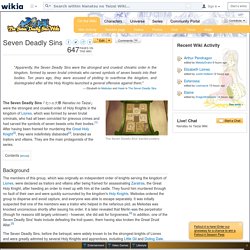 They are the main protagonists of the series. Background The members of this group, which was originally an independent order of knights serving the kingdom of Liones, were declared as traitors and villains after being framed for assassinating Zaratras, the Great Holy Knight, after heeding an order to meet up with him at the castle. They found him murdered through no fault of their own and were quickly surrounded by the kingdom's Holy Knights. Meliodas ordered the group to disperse and avoid capture, and everyone was able to escape separately.

Members Power Levels. ბერიკაობა - ����� � Google. Constitute. Section 1 The executive Power shall be vested in a President of the United States of America. He shall hold his Office during the Term of four Years, and, together with the Vice President, chosen for the same Term, be elected, as follows: Each State shall appoint, in such Manner as the Legislature thereof may direct, a Number of Electors, equal to the whole Number of Senators and Representatives to which the State may be entitled in the Congress: but no Senator or Representative, or Person holding an Office of Trust or Profit under the United States, shall be appointed an Elector. The Electors shall meet in their respective States, and vote by Ballot for two Persons, of whom one at least shall not be an Inhabitant of the same State with themselves. Inflatable ‘Star Wars’ Jabba the Hutt Lawn Ornament. Dragnet (franchise) Dragnet is perhaps the most famous and influential police procedural drama in media history. 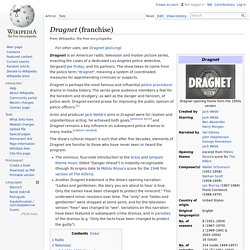 The series gave audience members a feel for the boredom and drudgery, as well as the danger and heroism, of police work. Dragnet earned praise for improving the public opinion of police officers.[1] Actor and producer Jack Webb's aims in Dragnet were for realism and unpretentious acting; he achieved both goals,[peacock term] and Dragnet remains a key influence on subsequent police dramas in many media. [citation needed] The show's cultural impact is such that after five decades, elements of Dragnet are familiar to those who have never seen or heard the program: Webb relaunched Dragnet in 1966, with NBC once again chosen to air the series. Webb produced a TV movie pilot for the new version of the show for Universal Television, although the pilot was not aired until January 1969. Dragnet currently airs Monday through Friday on Me-TV. Digital Painting. Creative Freedom. Bruce Lipton Video, Audio, Books, Articles, and More!

Disturb Reality. 20 Jobs of the Future. And the band tunes up. More and more advocates for gun control have come out in recent days with demands that we ban all guns. 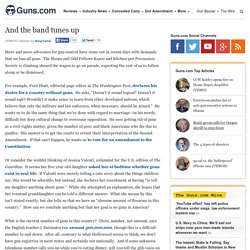 The Moms and Odd Fellows Kazoo and Kitchen-pot Percussion Society is climbing aboard the wagon to go on parade, expecting the rest of us to follow along or be dismissed. For example, Fred Hiatt, editorial page editor at The Washington Post, declares his desire for a country without guns. He asks, “Doesn’t it sound logical? Doesn’t it sound safe? Wouldn’t it make sense to learn from other developed nations, which believe that only the military and law enforcers, when necessary, should be armed.”

Or consider the wishful thinking of Jessica Valenti, columnist for the U.S. edition of The Guardian. What is the current number of guns in this country? This fact alone shows the absurdity of saying that banning guns is like allowing marriage equality. News, Sports, Jobs, WV, Community Information - The Inter-Mountain. Facebook Edward Himse. 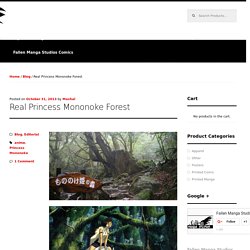 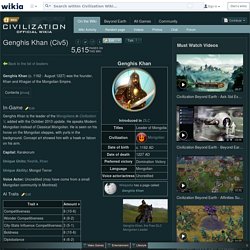 In-Game Edit Capital: Karakorum Voice Actor: Uncredited (may have come from a small Mongolian community in Montreal) AI Traits Edit Personality and Behavior Genghis Khan is very aggressive as always, and will most likely seek a domination victory. Genghis puts a high priority on raising a large offensive army consisting primarily of fast-moving mounted units, such as Horsemen and Cavalry. Genghis will likely go to war with every city-state he meets.

Genghis tends to declare war on every civilization he meets. Despite being a warmonger, Genghis Khan can be quite surprisingly friendly. Genghis will not try to build many wonders. If Genghis gets into a battle with you, make sure you build plenty of Spearmen, Pikemen, and Lancers, because these units are very good in combat against mounted units. Civilopedia Entry History Birth Early Life Unification Begins Outward Expansion Succession and Death Judgment of History. Genghis Khan (Civ5) - Civilization Wiki. Civ 5 Mongolia Strategy: Bonuses, Keshik, Khan (GG Unique) Updated for Gods and Kings and Brave New World DLCs Civilization's Leader: Genghis Khan Civ Bonus: Mongol Terror+30% Combat Strength when fighting City States or their Units. 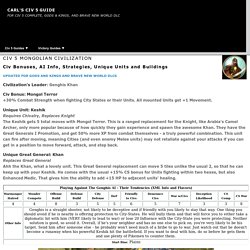 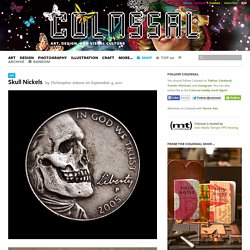 Although the history of carving miniature bas relief sculptures into coins stretches back to the 18th century if not earlier, it was greatly popularized in the early 20th century with the introduction of the Buffalo nickel. Stock Photos, Royalty Free Images & Video Footage By Dreamstime Stock Photography. Plus.google.