The use of language independent Meaning Based Computing technology from HP Autonomy.com and other industry standard, best quality, technology from companies including Nuance, Voxeo, IBM, etc., coupled with voice biometrics, voice stress analysis and personal profiling to accurately understand an individuals (or groups) problems, needs, wants and desires and then help them find answers, directions, connections, etc., in order to achieve the results needed for that individuals (or groups) benefit." £400,000+ That's how much a trial will cost, or there abouts. 20,000 all putting in £20 crowd funding maybe Most of this is handed to Autonomy to configure the trial kit. NOTE: ANYONE can hand Autonomy the money and have the kit up and running 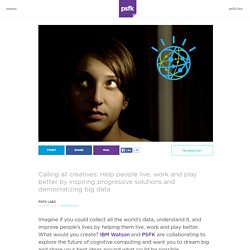 What would you create? IBM Watson and PSFK are collaborating to explore the future of cognitive computing and want you to dream big and share your best ideas around what could be possible. Billions of individuals across the globe are now connected to social media and the Internet. The ability of these scattered individuals to create, share, and consume ideas has created a rich and untapped reservoir of sweeping change. By harnessing data-driven insights and bridging the gap between human intelligence and computer data, we can build a society that functions better. There are three challenges that we are asking participants to ideate around: A. B. C. Marcus Yee sur Twitter : "#justhackit @HackUMass @iibmcloudboston IBM BlueMix and Watson workshop at UMass hackathon. Cloud & AI Hack tools.

Want a better life? Want a better World? Just start talking! Or Shouting! Or Screaming! Change Life. One Billion Voices Crying - Global, Workplace harrasment could be a thing of the past, Education without the biases built in. Work this World better. Just start talking! To physically set up the above it took the push of one button and then, one month later the 'bell' rings to say it's done. 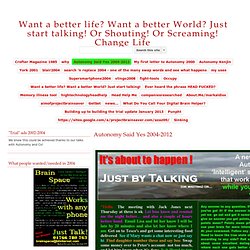 I was told this at the Verity UK Business Forum on 12 October 2005 It wasn't just Autonomy that liked the idea The police, Travellers, Craftspeople, computer programmers, network engineers, accountants, professors, unemployed people, ill people, angry people, depressed people, (in fact people from all walks of life).......... I talked with people with memory problems, and their carers if they had one, or more I researched and read over 11,000 PDF files within the first few years ( don't know what the count is now) That's how much a trial will cost, or there abouts. 20,000 all putting in £20 crowd funding maybe - most of this is handed to Autonomy to configure and run the trial.

NOTE: ANYONE can hand Autonomy the money and have the trial up and running - Please do! I want this for disasters and for personal distress, you can have it for whatever you want it for. Projectbrainsaver - Work this World better. Jus. MarkAldiss. IBM Watson is Fueling a New Era of Cognitive Apps. Definition of Hashtag #projectbrainsaver. About Skema. Skema has developed a methodology based on research in psychology, education, and technology to teach young people from the age of six to program. 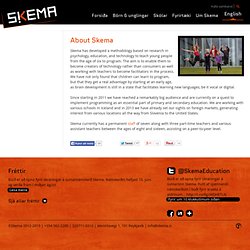 The aim is to enable them to become creators of technology rather than consumers as well as working with teachers to become facilitators in the process. We have not only found that children can learn to program, but that they get a real advantage by starting at an early age, as brain development is still in a state that facilitates learning new languages, be it vocal or digital. Since starting in 2011 we have reached a remarkably big audience and are currently on a quest to implement programming as an essential part of primary and secondary education.

We are working with various schools in Iceland and in 2013 we have already set our sights on foreign markets, generating interest from various locations all the way from Slovenia to the United States. Autonomy (Cambridge) Said "YES" in 2004 and 2012 - Global, Personal, local, regional, national, international, Cymru, projectbrainsaver, The Cwm Consultancy, The Craft Marketing Company Ltd. Aldiss - or #projectbrainsaver. Excendia vs. Apple Siri. Google Groupes. Autonomy (Cambridge) Said "YES" - Global, Personal, local, regional, national,international. Help in English.