Weblog of the Sydney Traditionalist Forum. About Neoreaction. 28 Sherman. Renegade Broadcasting - Hard-Hitting Talk Radio. Faith and Heritage Occidental Christianity for preserving Western Culture and People. Lawrence Glarus – It would be a shame if reality broke your utopia you got there. Reactionaryfuture. Captain Capitalism. Just another reactionary negotiating the decline.

Jim’s Blog. Outside in - Involvements with reality. Foundation for the Marketplace of Ideas. "What, indeed, is a state, if it is not an association of citizens united by law?" I'm here to write scathing, fearless reactionary commentary and chew bubble gum – and I'm all out of gum. The Occidental Observer - White Identity, Interests, and Culture. Washington Report on Middle East Affairs. Zombie Meditations. Adam Piggott – gentleman adventurer. Articles – Fash the Nation. Dispelling the Myth Makers.

VDARE - premier news outlet for patriotic immigration reform. Civilizing The Beast. View from the Right. February 12, 2014 Up until the death of Lawrence Auster on March 29, 2013, thousands of devoted fans came to this website everyday, sometimes two or three times a day. 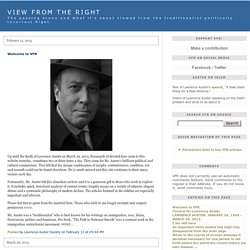 They came for Mr. Auster’s brilliant political and cultural commentary. They felt that his unique combination of insight, combativeness, erudition, wit and warmth could not be found elsewhere. He is much missed and this site continues to draw many visitors each day. Fortunately, Mr. Please feel free to quote from the material here. Mr. Posted by Lawrence Auster Society on February 12 at 05:44 PM March 29, 2013 A funeral mass for Lawrence Auster is scheduled for 1 p.m. Visitation at the church; noon to 1 p.m. Posted by Laura Wood on March 29 at 10:18 AM Lawrence Auster died today at 3:56 a.m., Eastern Daylight Time, at a hospice in West Chester, Pennsylvania.

On Monday evening, after arriving at the hospice in the late afternoon, Mr. He did not expect that to be the last. Exploring Propertarianism. The Unz Review: A Collection of Interesting, Important, and Controversial Perspectives Largely Excluded from the American Mainstream Media. Alternative Right. Christopher Cantwell - Anarchist, Atheist, Realist. Archives for Kevin MacDonald. Donald Trump, Judge Curiel, and (((Mean Tweets))): The Reality of Ethnic Identification in Multicultural America Strong ethnic identifications for non-Whites remain controversial in multi-cultural America. 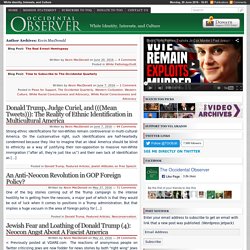 On the cuckservative right, such identifications are half-heartedly condemned because they like to imagine that an ideal America should be blind to ethnicity as a way of justifying their non-opposition to massive non-White immigration (“after all, they’re just like us”) and their own lack of identification as […] An Anti-Neocon Revolution in GOP Foreign Policy? One of the big stories coming out of the Trump campaign is the intense hostility he is getting from the neocons, a major part of which is that they would be out of luck when it comes to positions in a Trump administration.

But that implies a huge vacuum in the area of foreign policy for […] Jewish Fear and Loathing of Donald Trump (4): Neocon Angst About A Fascist America. Archives for Jews as An Elite. In Praise of James Petras I’m thrilled to see that retired scholar James Petras is still punching above his weight. 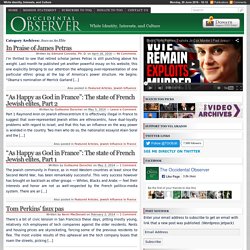 Last month he published yet another powerful essay on his website, this one explicitly bringing to our attention the whopping over-representation of one particular ethnic group at the top of America’s power structure. He begins: “Obama’s nomination of Merrick Garland […] “As Happy as God in France”: The state of French Jewish elites, Part 2 Part 1 Raymond Aron on Jewish ethnocentrism It is effectively illegal in France to suggest that over-represented Jewish elites are ethnocentric, have dual-loyalty problems with regard to Israel, and that this has an influence on the way power is wielded in the country. The Alternative Hypothesis. Blogging from the Age of Blood & Irony.

Propertarianism. By Vivek Upadhyay GOSSIP Gossip is a non-correspondent, warranty-free means of enhancing personal status through deploying and extrapolating upon selective information about the person being gossiped about. 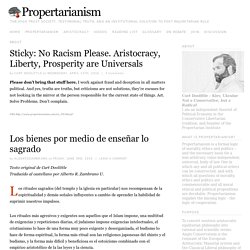 Through use of loaded statements, jokes, rash impressionistic judgments, etc. in a shared consensus often exhibiting “shared information bias” despite the demonstrable costs of this error, gossipers seek to obtain a non-correspondent and parasitic discount on interpersonal status relative to a subject gossiped about, in part, by circumventing the high cognitive requirements of engaging in constructive criticism (rather than loaded critique) which involves a truthful gauging of the gossip subject’s incentives to have said or done supposedly cost-imposing and investment worthiness-undermining things. Graaaaaagh dot com. American Renaissance. Fash Britannia. Daily Stormer. GotNews - Breaking News & Breaking Rules. The Official Website of Dr. David Duke PhD. 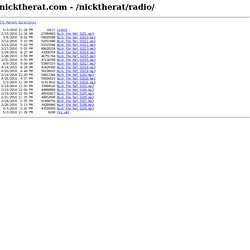 Foreign Policy - the global magazine of economics, politics, and ideas.