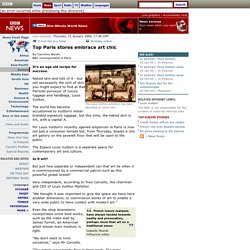 Naked skin and lots of it - but not necessarily the sort of skin you might expect to find at that Parisian purveyor of luxury luggage and handbags, Louis Vuitton. The world has become accustomed to Vuitton's initial-branded signature luggage, but this time, the naked skin is Art, with a capital A. For Louis Vuitton's recently opened emporium in Paris is now not just a consumer temple but, from Thursday, boasts a chic art gallery on the seventh floor that will be open to the public. The Espace Louis Vuitton is a separate space for contemporary art and culture. Is it art? But just how separate or independent can that art be when it is commissioned by a commercial patron such as this powerful global brand? Very independent, according to Yves Carcelle, the chairman and CEO of Louis Vuitton Malletier. Even the shop downstairs incorporates some bold works, such as the video wall by James Turrell, an American artist whose main medium is light.

Lulu Guinness's Top Ten Fashion-Meets-Art Moments  The British accessories fashion designer Lulu Guinness OBE shares her top ten moments where the worlds of art and fashion collide following a recent visit to Mondrian and his Studios at Tate Liverpool Lulu Guinness with Tate Liverpool Director Francesco Manacorda in the recreation of Mondrian's studio in 'Mondrian and his Studios' © Pete Carr Anyone that knows me knows that art is, and always has been, such a huge passion of mine so when I was invited for a tour of the Mondrian exhibition at the Tate in Liverpool I was overjoyed! 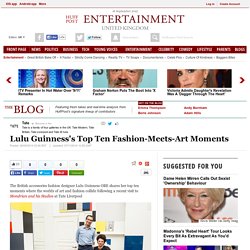 Thank you again to the team for making my visit such an enjoyable one, and in particular to Artistic Director Francesco Manacorda for taking me round the exhibition and giving me a wonderful insight into the life of one of my favourite artists. I can't recommend it enough and continue to rave about it to anyone who will listen! Love Lulu x Richard Prince X Louis Vuitton Andy Warhol X Versace James Tissot X Alexander McQueen Louise Bourgeois X Comme Des Garcons. 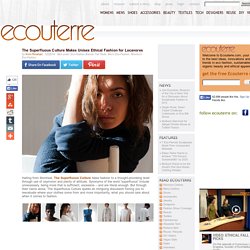 Synonyms of the word “superfluous” include unnecessary, being more that is sufficient, excessive – and are literal enough. But through their name alone, The Superfluous Culture sparks an intriguing discussion forcing you to reevaluate where your clothes come from and more importantly, what you should care about when it comes to fashion. Designer Adam Taubert started The Superfluous Culture in 2010 with the idea of creating durable and functional goods that transcend the need for excess. While materials are sourced ethically, organically, nationally and internationally, the local manufacturing of all product is nearly entirely local. In fact, 80% of all product are manufactured less than 10 kilometers away from the Superfluous Atelier. 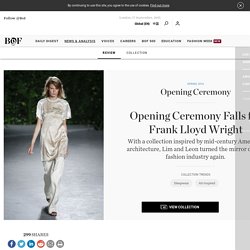 On Sunday night, Opening Ceremony’s Carol Lim and Humberto Leon decided to turn embarrassment into performance art. The duo cast dancers as models, who darted down a winding road of a catwalk only to purposefully trip over their twisted-wooden heels. (Justin Peck, whose piece at the New York City Ballet’s Fall Fashion Gala on September 30th will feature costumes designed by Lim and Leon, choreographed the steps.) The first time it happened, the audience was alarmed. The next? Whether staging a satirical play (as they did two seasons ago) or asking models to take a tumble, Lim and Leon like to turn the mirror on the fashion industry, challenging show-goers to laugh at themselves.

Fiorucci's fashion: Pop-culture pioneer drew crowds, celebs before H&M Republican American. Los Angeles Times (TNS) Before Topshop and H&M made fashion-tainment the name of the retail game, there was Fiorucci.... 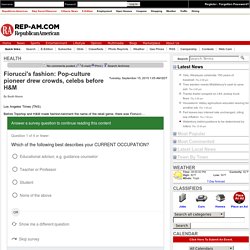 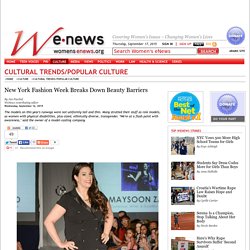 Role models--women of all shapes, colors, sizes and ages-- walked on a few New York Fashion Week runways during the Spring/Summer 2016 shows that began on Sept. 10 and wrap up on Thursday night, on Sept. 17. It's a sign that the fashion world is becoming slightly more democratic. Fashion's fixation on twig-thin white female teens as the beauty ideal seems to be loosening up a bit. Maysoon Zayid, an Arab American comedian and a disability rights advocate who has cerebral palsy, made her debut on Sept. 10 in the runway show of designer Carrie Hammer.