MU News Bureau. Oct. 23, 2013 Story Contact(s): Nathan Hurst, hurstn@missouri.edu, 573-882-6217 COLUMBIA, Mo. – Some people possess a small number of cells in their bodies that are not genetically their own; this condition is known as microchimerism. 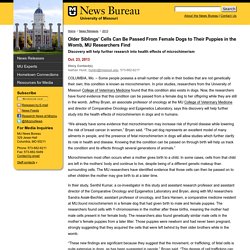 In prior studies, researchers from the University of Missouri College of Veterinary Medicine found that this condition also exists in dogs. Now, the researchers have found evidence that this condition can be passed from a female dog to her offspring while they are still in the womb. Jeffrey Bryan, an associate professor of oncology at the MU College of Veterinary Medicine and director of Comparative Oncology and Epigenetics Laboratory, says this discovery will help further study into the health effects of microchimerism in dogs and in humans. “We already have some evidence that microchimerism may increase risk of thyroid disease while lowering the risk of breast cancer in women,” Bryan said. News Center - Variety of toxicants can harm subsequent generations. PULLMAN, Wash. – A Washington State University researcher has demonstrated that a variety of environmental toxicants can have negative effects on not just an exposed animal but the next three generations of its offspring. 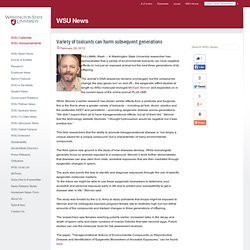 The animal’s DNA sequence remains unchanged, but the compounds change the way genes turn on and off – the epigenetic effect studied at length by WSU molecular biologist Michael Skinner and expanded on in the current issue of the online journal PLoS ONE. While Skinner’s earlier research has shown similar effects from a pesticide and fungicide, this is the first to show a greater variety of toxicants – including jet fuel, dioxin, plastics and the pesticides DEET and permethrin – promoting epigenetic disease across generations. “We didn’t expect them all to have transgenerational effects, but all of them did,” Skinner told the technology website Gizmodo.

“I thought hydrocarbon would be negative but it was positive too.” The study was funded by the U.S. Do Organisms Become More Evolvable in Times of Stress? Updated on November 18, 2015 Imagine that you wake up in a pit, surrounded by people who are all wounded and bleeding. 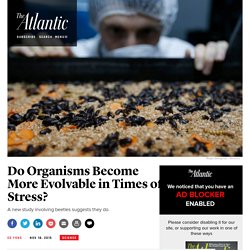 Something had clearly gone horribly wrong. Maybe you panic. Maybe you tend to the wounded. Maybe you team up to plan an escape. When Joachim Kurtz from the University of Münster placed healthy beetles among wounded peers, he found that they can unveil mutations that are present in their genomes but whose effects are usually masked. Here’s how it works. Whether it will depends upon HSP90, a protein that helps other proteins to fold. This is, in fact, exactly what happens to animals under stressful conditions.

Lindquist's team has since found that HSP90 stores genetic variation in bacteria, plants, yeast, and animals. Mechanism for stress-induced epigenetic inheritance uncovered in new study. Researchers at RIKEN have uncovered a mechanism by which the effects of stress in the fly species Drosophila are inherited epigenetically over many generations through changes to the structure of chromatin, the material that makes up the cell nucleus. 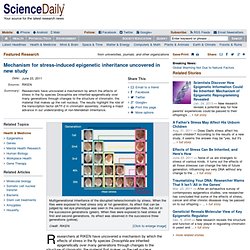 Published in the journal Cell, the results highlight the role of the transcription factor dATF-2 in chromatin assembly, marking a major advance in our understanding of non-Mendelian inheritance. Recent years have seen growing interest in the phenomenon of epigenetic inheritance: the idea that our genome, through epigenetic tags and other structural modifications, transmits more information than the sequence of letters encoded in its DNA base pairs alone. Stresses of various kinds have been shown to induce such epigenetic change, yet the underlying mechanisms involved remain unknown. GetSharedSiteSession?rc=4&redirect= Mice can inherit learned sensitivity to a smell. 2-Dec-2013 [ Print | E-mail ] Share [ Close Window ] Contact: Quinn Eastmanqeastma@emory.edu 404-727-7829Emory Health Sciences. 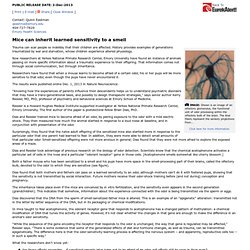 Epigenetics and Inheritance. Most complex organisms develop from specialized reproductive cells (eggs and sperm in animals). 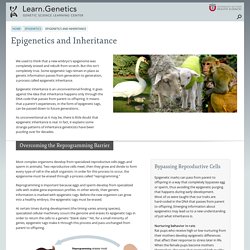 Two reproductive cells meet, then they grow and divide to form every type of cell in the adult organism. In order for this process to occur, the epigenome must be erased through a process called "reprogramming. " Reprogramming is important because eggs and sperm develop from specialized cells with stable gene expression profiles. In other words, their genetic information is marked with epigenetic tags. Mom vs Pop epigenetic inheritance. Epigenetic imprinting. Genomic Imprinting. Scientists have come up with a number of hypotheses to explain why imprinting happens in mammals. 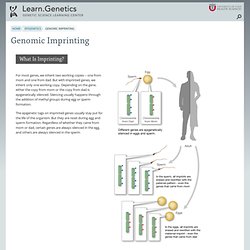 One of these, the Genetic Conflict hypothesis, supposes that imprinting grew out of a competition between males for maternal resources. In some species, more than one male can father offspring from the same litter. A house cat, for example, can mate more than once during a heat and have a litter of kittens with two or more fathers. If one father's kittens grow larger than the rest, his offspring will be more likely to survive to adulthood and pass along their genes. So it's in the interest of the father's genes to produce larger offspring. DNA isn’t everything. Research into epigenetics has shown that environmental factors affect characteristics of organisms. These changes are sometimes passed on to the offspring. ETH professor Renato Paro does not believe that this opposes Darwin’s theory of evolution.

A certain laboratory strain of the fruit fly Drosophila melanogaster has white eyes. If the surrounding temperature of the embryos, which are normally nurtured at 25 degrees Celsius, is briefly raised to 37 degrees Celsius, the flies later hatch with red eyes. If these flies are again crossed, the following generations are partly red-eyed – without further temperature treatment – even though only white-eyed flies are expected according to the rules of genetics.