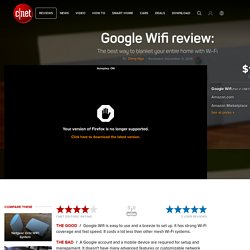 You just need two things: An internet-connected iOS or Android mobile device, like a phone or a tablet A Google account, which you can get for free This is because, unlike most routers, there's no web-based interface and the new Wi-Fi system can only be set up and controlled via the new Google Wifi mobile application. Once set up, the Google Wifi will stay connected to Google at all times and will log into your Google account each time you want to manage it.

Google says the Wifi doesn't collect user activity data, like what sites you're visiting. Still, a constant connection to Google is required. But that's not something most people will care about, plus it will keep the device secure from hacking via regular automatic updates. View full gallery What I love about Google Wifi It's really easy to use: It took me about 15 minutes to set up all three units using an Android phone. Test du système Netgear Orbi: le wifi n'a plus de limites. Netgear Orbi Pour. 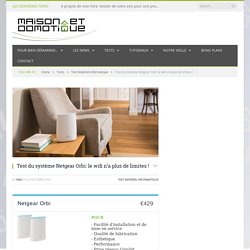 AmpliFi. As the number of devices in the connected home continues to grow, understanding band and channel selection can help you maximize your connected experience. 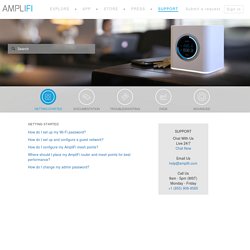 To learn how to set up your network to provide each device with the best signal, you need to know how band and channel selection works and how your Wi-Fi signal operates. Band and channel selection are important when you want to have the most efficient network possible. Your wireless data communicates using a band of frequencies. Frequency is measured in Hertz (Hz). Our AmpliFi routers and mesh points use two of these frequencies; 2.4 GHz and 5 GHz. Here are a couple of examples: In-home use: If your home has many walls, then you should use the 2.4 GHz frequency to cover the entire home.Open-office use: If you have no walls between the AmpliFi router and your devices, then use the 5 GHz frequency, which is more efficient and provides a stronger signal with less range. 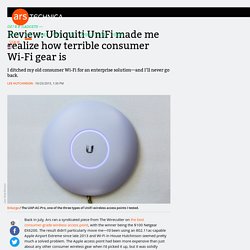 The result didn’t particularly move me—I’d been using an 802.11ac-capable Apple Airport Extreme since late 2013 and Wi-Fi in House Hutchinson seemed pretty much a solved problem. The Apple access point had been more expensive than just about any other consumer wireless gear when I’d picked it up, but it was solidly reliable, quite quick, and covered all 2,600 square feet (about 241 square meters) of the house without any noticeable dead spots.

But a few of the comments in the syndicated piece echoed a general dissatisfaction with the consumer wireless access point landscape and recommended we check out some entry-level "enterprise" wireless gear instead. I wound up with four different Ubiquiti UniFi wireless access points to test. It is extremely important to state that these devices are not NAT routers. Hands-on: Ubiquiti’s Amplifi covers the whole house in a Wi-Fi mesh. Back in May, networking OEM Ubiquiti announced its new Ubiquiti Labs division and that division’s first product: a home mesh Wi-Fi system called Amplifi. 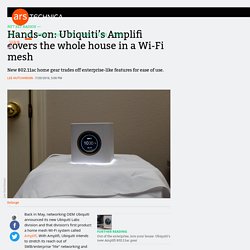 With Amplifi, Ubiquiti intends to stretch its reach out of SMB/enterprise "lite" networking and into home territory—and not just the homes of crazies like me, either. Amplifi is targeted at the plug-and-play crowd for whom a single, central Wi-Fi base station doesn’t quite cut the mustard. It’s a market squarely occupied by Eero, Luma, and a few other players—home mesh Wi-Fi, where you throw down a few devices and every nook and cranny of your home gets solid coverage (in theory, at least). Ubiquiti sent Ars a preproduction Amplifi unit last week, and I’ve spent the weekend getting some initial impressions.

This isn’t going to be an exhaustive review, since I’ve only had a few days with the system, but my impressions so far are generally positive. The quick takeaway The details: unboxing and setup. Ubiquiti UAP-AC-PRO-5 maintenant 25% moins cher UniFi AP, AC PRO 5 Pack (No PoE adapter. AmpliFi Wi-Fi.