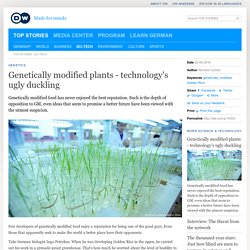 Even those that apparently seek to make the world a better place have their opponents. Take German biologist Ingo Potrykus. When he was developing Golden Rice in the 1990s, he carried out his work in a grenade-proof greenhouse. That's how much he worried about the level of hostility to his apparently altruistic project, aimed at slashing vitamin A deficiency among children. The World Health Organization estimates that 124 million children don't get enough vitamin A and between one and two million die each year for lack of the nutrient.

Most in the West would derive vitamin A from dairy products or from a breakdown of the beta carotene in carrots. Golden Rice is colored because it contains beta carotene, a source of vitamin A It wasn't simple. A tortuous route to trial The environmental group Greenpeace believes Golden Rice is still far from being a finished product, in any case. Samsung Recalling Galaxy Note 7 Phones Over Fire Hazard. When Samsung released their Galaxy Note 7 smartphones on August 19, 2016, millions of tech fans around the world were excited to get their hands on the new device. 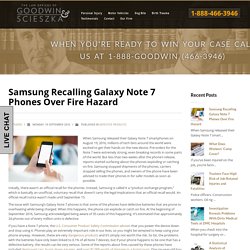 Pre-orders for the Note 7 were extremely strong, even breaking records in some parts of the world. But less than two weeks after the phone’s release, reports started surfacing about the phones exploding or catching on fire. Samsung stopped shipments of the phones, carriers stopped selling the phones, and owners of the phone have been advised to trade their phones in for safer models as soon as possible.

Initially, there wasn’t an official recall for the phones. Instead, Samsung is called it a “product exchange program,” which is basically an unofficial, voluntary recall that doesn’t carry the legal implications that an official recall would. The issue with Samsung’s Galaxy Note 7 phones is that some of the phones have defective batteries that are prone to overheating while being charged. If you have a Note 7 phone, the U.S. 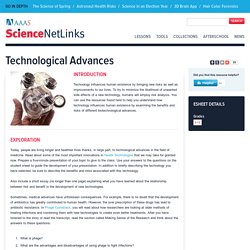 To try to minimize the likelihood of unwanted side effects of a new technology, humans will employ risk analysis. You can use the resources found here to help you understand how technology influences human existence by examining the benefits and risks of different biotechnological advances. I just tried Google's new Cardboard with my iPhone. One year ago, Google introduced its first step into the fast-growing world of virtual reality — but Google Cardboard felt more like the whimsical side of Google having fun with a trend rather than embracing it head-on with a "serious" product. 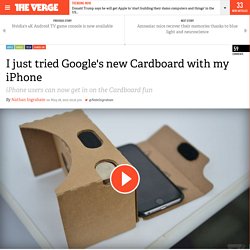 However, as the year went on, it became clear that Cardboard was no joke. Google already sells a host of different Cardboard kits from various manufacturers and is also offering an SDK to help developers build apps for Cardboard. Today, the company's giving Google I/O attendees a new version of its Cardboard hardware, with a few key changes.

For starters, it's big — it can now support phones up to 6 inches. It's a logical place for Google to go, given the size of the flagship Nexus 6 smartphone. Do you need to warm up a car in winter? Best Gaming Mouse Pads 2016. If you're going to invest $50 or more in a great gaming mouse, it couldn't hurt to plunk down just a little bit more for a great mouse pad to go with it. 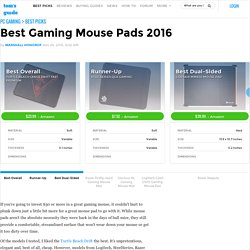 While mouse pads aren't the absolute necessity they were back in the days of ball mice, they still provide a comfortable, streamlined surface that won't wear down your mouse or get it too dirty over time. Of the models I tested, I liked the Turtle Beach Drift the best. It's unpretentious, elegant and, best of all, cheap. However, models from Logitech, SteelSeries, Razer and smaller companies performed similarly well. What to Look For Before you buy a gaming mouse pad, you should know that you may not need one. When hunting for a mouse pad, there are only a few major factors to keep in mind: material, thickness and size. Other mouse pads, like the Razer Firefly, are unlike anything else on the market, and combine expensive electronics with otherwise-simple pads. How We Test Gaming Mouse Pads Best Overall: Turtle Beach Drift Razer Firefly. Best Quality Gaming Mousepads for Gamers.