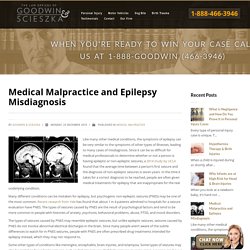 Since it can be so difficult for medical professionals to determine whether or not a person is having epileptic or non-epileptic seizures, a 2014 study by UCLA found that the average time between a person’s first seizure and the diagnosis of non-epileptic seizures is seven years. In the time it takes for a correct diagnosis to be reached, people are often given medical treatments for epilepsy that are inappropriate for the real underlying condition. Conditions Commonly Misdiagnosed as Epilepsy. A moment of unresponsiveness; the inability to recall what just happened; convulsions or jerking movements; sudden stiffness of the body: These are classic symptoms of an epilepsy seizure -- triggered by abnormal electrical impulses in the brain. 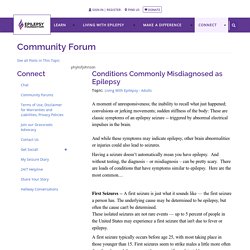 And while these symptoms may indicate epilepsy, other brain abnormalities or injuries could also lead to seizures. Having a seizure doesn’t automatically mean you have epilepsy. It's not epilepsy: Counseling helps those with misdiagnosed seizures. One of four patients admitted to hospitals for evaluation of seizures don't have epilepsy but rather have a debilitating and difficult to diagnose condition known as psychogenic non-epileptic seizures, or PNES. 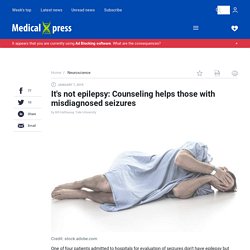 Nearly 80 percent of these patients who suffer seizures not caused by altered electrical activity in the brain have been previously misdiagnosed as having epilepsy and prescribed anti-seizure medicines to which they do not respond. Many return to emergency rooms again and again. But a new study by researchers at Yale University and Brigham and Women's Hospital in Boston show that psychiatric counseling does help patients with the condition—once called hysteria—according to research published Jan. 4 in the journal Neurology. 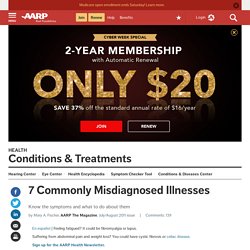 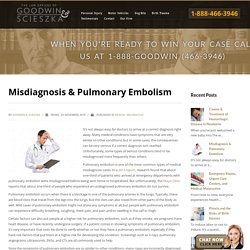 Many medical conditions have symptoms that are very similar to other conditions, but in some cases, the consequences can be very serious if a correct diagnosis isn’t reached. Unfortunately, some types of serious conditions tend to be misdiagnosed more frequently than others. 10 Commonly Misdiagnosed Conditions - Everyday Health. How in vitro fertilization embryo mix-ups can happen. In vitro fertilization involves joining a woman's egg and a man's sperm in a lab, and then transferring one or more resulting embryos into the woman's uterus. 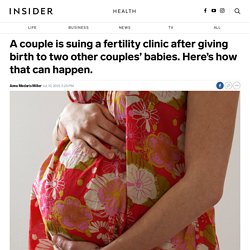 It takes most people more than one egg retrieval cycle before having a healthy pregnancy and baby through IVF. At least two couples are suing a California fertility clinic for an embryo mixup that led one of them to have one of the others' baby. The Reality About IVF Mix-Ups. Struggling to conceive a much-wanted child is an absolutely heartbreaking experience for millions of people every year. 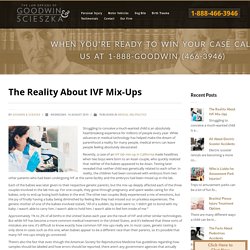 While advances in medical technology has helped make the dream of parenthood a reality for many people, medical errors can leave people feeling absolutely devastated. Recently, a case of an IVF lab mix-up in California made headlines when two boys were born to an Asian couple, who quickly realized that neither of the babies appeared to be Asian. Testing later revealed that neither child was genetically related to each other. IVF Mix-Up: Three Families Say Embryos Were Switched. Read: The fertility doctor’s secret “All of a sudden my brain went to, I didn’t get to bond with my baby. 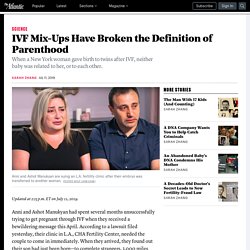 I wasn’t able to carry him. Are Electronic Prescriptions Really Safer? Top 5 Most Common Prescription Drug Errors. When taken correctly, prescription drugs can improve a patient’s quality of life, and reduce their likelihood of experiencing serious adverse events related to a certain condition. 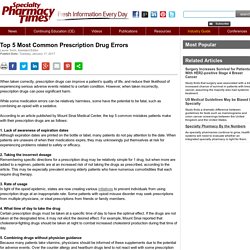 However, when taken incorrectly, prescription drugs can pose significant harm. While some medication errors can be relatively harmless, some have the potential to be fatal, such as combining an opioid with a sedative. According to an article published by Mount Sinai Medical Center, the top 5 common mistakes patients make with their prescription drugs are as follows: 1. Lack of awareness of expiration dates Although expiration dates are printed on the bottle or label, many patients do not pay attention to the date. 2. 3. 10 Strategies for Minimizing Dispensing Errors. Medical Malpractice: Inadequate Staffing in Nursing Homes. ‘Like A Ghost Town’: Erratic Nursing Home Staffing Revealed Through New Records. ITHACA, N.Y. — Most nursing homes had fewer nurses and caretaking staff than they had reported to the government, according to new federal data, bolstering the long-held suspicions of many families that staffing levels were often inadequate. 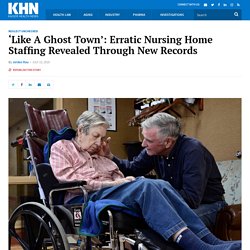 The records for the first time reveal frequent and significant fluctuations in day-to-day staffing, with particularly large shortfalls on weekends. On the worst-staffed days at an average facility, the new data show, on-duty personnel cared for nearly twice as many residents as they did when the staffing roster was fullest. The data, analyzed by Kaiser Health News, come from daily payroll records Medicare only recently began gathering and publishing from more than 14,000 nursing homes, as required by the Affordable Care Act of 2010.

Medicare previously had been rating each facility’s staffing levels based on the homes’ own unverified reports, making it possible to game the system. Nursing home staffing often thin, inconsistent: 4 key findings. Most Common Types of Surgical Errors. Surgeons under stress make more mistakes in the operating room, study finds. Thousands of Mistakes Made in Surgery Every Year. Dec. 26, 2012 -- More than 4,000 preventable mistakes occur in surgery every year at a cost of more than $1.3 billion in medical malpractice payouts, according a new study. How preventable? Well, researchers call them "never events" because they are the kind of surgical mistakes that should never happen, like performing the wrong procedure or leaving a sponge inside a patient's body after surgery.

But researchers found that paid malpractice settlements and judgments for these types of never events occurred about 10,000 times in the U.S. between 1990 and 2010. Their analysis estimates that each week surgeons: A Pharmacy Screwed Up My Rx and I Took the Wrong Drug for a Month. Medication Mistake? Here’s What You Should Do. Medication is supposed to help you feel better, but if there’s an error with your prescription, the results can be very serious. Mistakes like giving a patient the incorrect dose of medication, prescribing a medication that the patient is allergic to, or giving a patient the wrong medicine all together can all have potentially dangerous or fatal, side effects and complications.

A missed zero or misplaced decimal point, for example, can result in a patient taking too much or not enough of their medicine. With many medical facilities making the switch to electronic prescription systems, progress is being made on reducing medication errors, but mistakes still happen. It’s believed that about 1-5 percent of prescriptions filled in the United States have some type of error. A pharmacist might mistakenly give a patient a medication that has a very similar name to the one prescribed to them, overlook a drug interaction or patient allergy, or misread a doctor’s recommended dosage. Study Finds Mistakes With Medications On The Rise : Shots - Health News. The rate of serious medication errors that occur outside of health care facilities doubled from 2000 to 2012, a new study finds. Gillian Blease/Getty Images hide caption toggle caption Gillian Blease/Getty Images.

Inadequate Staffing: How High Nurse-to-Patient Ratios Impact Patient Care. Patients being admitted to a hospital often have a lot of things on their mind. They might be anxious about having a surgery or other procedure performed, or they might be wondering about how long it’s going to take for them to recover. But one thing they often don’t think about is whether or not there’s going to be enough nurses on staff to help care for them. Most people assume adequate staffing levels at a hospital will be a given, but in reality, that’s not always the case. Widespread Understaffing of Nurses Increases Risk to Patients. What happens to patients when nurses are short-staffed? Inadequate Staffing Harms Quality and the Bottom Line. The lack of adequate nurse staffing can result in longer lengths of stay, patient dissatisfaction, higher readmissions and more adverse events — all things that can decrease quality and increase impacts on the bottom line.

“With the increased focus on value-based care, optimal nurse staffing will be essential to delivering high-quality, cost-effective care,” concluded a 2015 white paper from the American Nurses Association. The paper also cited the growing body of evidence on economic benefits associated with optimal nurse staffing. Through the years, study after study has supported the benefits of better nurse staffing. “If there are not enough nurses at the bedside, bad things are likely to happen,” said Matthew McHugh, PhD, JD, MPH, RN, FAAN, an associate professor at the University of Pennsylvania (Penn) School of Nursing in Philadelphia, an author of the paper, in a statement.

Patient Outcomes. What causes birth injuries? Birth Injury Causes. What Causes Birth Injuries? Delayed Birth One of the leading birth injury causes is delayed birth. The human brain was designed to withstand a certain amount of pressure for a certain amount of time. However, labors that last over 18 hours are considered long, difficult labors, and at 18 hours, the compression on the brain becomes too much to withstand. This is generally when the baby may show signs of fetal distress as the baby’s brain starts reacting in emergency mode, thus elevating the baby’s blood pressure.

Oxygen Deprivation. Common Causes of Birth Trauma Injuries. Despite all the progress that’s been made to make the birthing process safer, it’s still extremely easy for things to go wrong. When complications come up, it’s crucial that the professionals attending to the delivery take appropriate actions to protect the health of the baby. Birth Injury Symptoms and Your Rights. Birth Injury Symptoms. Symptoms of Infant Brain Damage.