Stockholm Fashion Week: is Swedish style having its own Ikea moment? - Features - Fashion - The Independent. “There's a certain pragmatic aspect,” says Melissa Drier, the Berlin correspondent for Women's Wear Daily and in town for the shows. 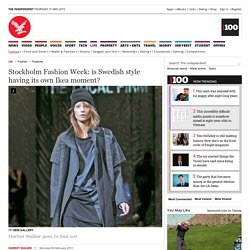 “Moskva: Urban Space” Investigates the Future of Moscow’s Public Realm at the 2014 Venice Biennale. The New American Dream Is Living in a City, Not Owning a House in the Suburbs. Smart study verifies factors for "urban joy in European cities”: City life makes people happy. Stuttgart. 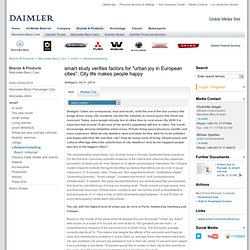 Cities are anonymous, loud and hectic. Until the end of the last century this image drove many city residents out into the suburbs. In recent years this trend has reversed. Today, more people already live in cities than in rural areas. By 2050 it is expected that around 70 percent of the world's population will live in cities. The representative smart study "Joy of urban living in Europe" examined these questions. The city with the highest level of urban joie de vivre is Porto, followed by Hamburg and Cologne. Pin by Marit Olsen on BA. “Moskva: Urban Space” Investigates the Future of Moscow’s Public Realm at the 2014 Venice Biennale.

25 Vertical Gardens. Gormley-parallel-field-gallery-673x295.jpg (JPEG Image, 673 × 295 pixels) Street Museum. EVENTS IN LONDON THIS WEEK. From music and art festivals, to dancing lessons and independent markets, Twenty Something London share this week’s most anticipated events… Supper Club, Westbourne Park On the cutting edge of fusion techniques and food design, the LA king of pop-up’s Laurent Quenioux is taking over the kitchen at Maida Hill Place, starting from Wednesday for 10 days. 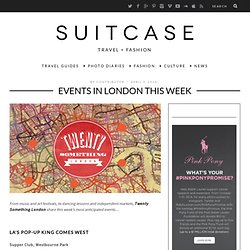 In collaboration with Grub Club, prepare for a six course intimate meal made from the best seasonal British produce with a classical French twist. Dancing Lessons, Belsize Park The folks at Antidote run an eclectic music, dance and game experience every week with the aim of getting new like-minded people to meet. Market, Hackney Downs. RACHEL WHITEREAD CREATES LONDON POCKET TUBE MAP COVER. Words by: Unsah Malik We like to describe our relationship with the London underground as complicated. 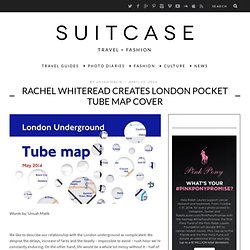 We despise the delays, increase of fares and the deadly – impossible to avoid – rush hour we’re constantly enduring. On the other hand, life would be a whole lot messy without it – half of us wouldn’t be able to reach the office on a daily basis, and nor would we be able to admire the recent addition of world class art that’s plastered across tubes and printed on those cute pocket tube maps. Speaking of those pocket tube maps, we’ve just received news on something pretty exciting: Rachel Whiteread, a SUITCASE favourite and Turner Prize-winning artist, has been commissioned by the headstrong Art on The Underground team to create a brand new cover, to be released on 16 May 2014.

TO DO: BUSHWICK STREET ART, BROOKLYN. Words by Christine O’Leary LOCATION: Bushwick in Brooklyn, NYTHE STORY A recent night out in Bushwick piqued my curiosity for this gritty neighborhood dotted with cocktail hideaways, and reminded me of one of my favourite spots across the pond, Kreuzberg in Berlin. 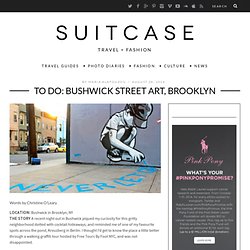 I thought I’d get to know the place a little better through a walking graffiti tour hosted by Free Tours By Foot NYC, and was not disappointed. Morning Glory London - Rave your way into the day. The perfect joy of swimming and running through London. Has cycling finally become a natural part of British city life? To cycle in London, where I live, is to test the ability of the brain to process multiple and dynamic sources of information. 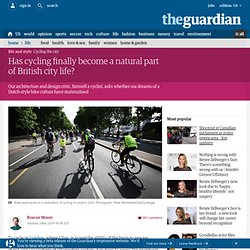 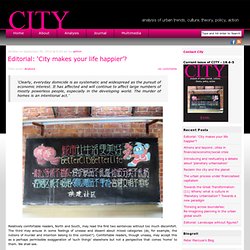 It has affected and will continue to affect large numbers of mostly powerless people, especially in the developing world. Escaping the city: The coming rise of mass digital nomadism. In the future many of us will live in nomadic, tech-savvy communities away from urban areas, according to Montreal-based trend forecasting agency Logomachy. 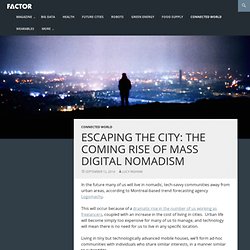 This will occur because of a dramatic rise in the number of us working as freelancers, coupled with an increase in the cost of living in cities. Urban life will become simply too expensive for many of us to manage, and technology will mean there is no need for us to live in any specific location. Living in tiny but technologically advanced mobile houses, we’ll form ad-hoc communities with individuals who share similar interests, in a manner similar to subreddits.

“Mass digital nomadism will act a little bit like Reddit: agglomerating geeks together in proto-cities (gamers, psychonauts, artists, vegans, nudist, queers), and create super cool homogenous communities,” said Logomachy’s Guillaume Dumas, adding that this system would make it easier for individuals to find friends and potential partners. Next-gen urban farms: 10 innovative projects from around the world. Many shoppers like the idea of buying local. 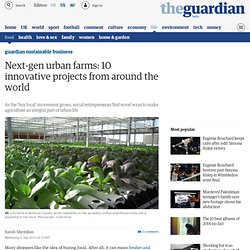 After all, it can mean fresher and healthier foods, stronger local economies, direct contact with food producers and in some cases — but not always — lower carbon emissions. But most of us have only a few options for participating in the local food movement: visiting the farmers market or signing up for a community supported agriculture (CSA) subscription. As the movement continues to grow and evolve, however, social entrepreneurs are experimenting with novel ways to make local agriculture an integral part of urban life. Exploring San Francisco’s Rooftop Parks and Gardens with William Wyckoff. In today’s guest post William Wyckoff, author of How to Read the American West: A Field Guide, takes us on a tour of the rooftop gardens of San Francisco. 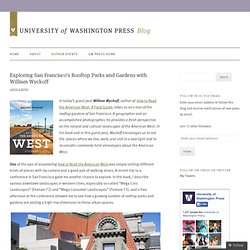 A geographer and an accomplished photographer, he provides a fresh perspective on the natural and cultural landscapes of the American West. In his book and in this guest post, Wyckoff encourages us to see the places where we live, work, and visit in a new light and to reconsider commonly held stereotypes about the American West. One of the joys of assembling How to Read the American West was simply visiting different kinds of places with my camera and a good pair of walking shoes.

A recent trip to a conference in San Francisco gave me another chance to explore. Photo 1 San Francisco’s rooftop greenery is part of a growing national phenomenon. Photo 2 Photo 3. Amanda Burden: How public spaces make cities work. The rooftop revolution. When Tiana Begum and her two teenagers moved into their new home in a 1970’s council flat in West London, the landlord didn’t just hand over the keys but also the pamphlet for their local veg-box scheme, which delivers fresh produce grown in the rooftop greenhouse above their heads.

‘That’s not food miles,’ Tiana exclaimed, ‘that’s food metres!’ They get a discount when they volunteer a few hours a week with growing and distributing the food. Tiana also soon discovered their energy bills are 40% cheaper due to the insulating effect of the greenhouse. These benefits come with some rules – you must separate your food waste from the rest of your household waste. HOME - edibleeastside. New York City is set to shift gender laws. New York City is set to change the laws on gender and enable people to alter their birth certificates to represent their identity, as long as they have the blessing and support of medical professionals. The New York Times reports that the new law would allow a person to change their certificate so long as a qualified professional can vouch that the change “more accurately reflects the applicant’s sex and is consistent with contemporary expert standards regarding gender identity.”

As it stands, anyone wishing to change their gender identity "officially" must provide proof of convertive surgery. Escape to The Roof Gardens, London's FREE Hidden Paradise! - To Do List. Rooftop Film Club Presents The Ultimate Film Experience.