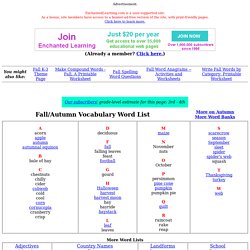 As a bonus, site members have access to a banner-ad-free version of the site, with print-friendly pages.Click here to learn more. (Already a member? Click here.) Winter Vocabulary Word List. British Holidays - Valentine's Day. Valentine's Day in United Kingdom. People with romantic feelings for a particular person may send that person cards, gifts and text messages on Valentine's Day. 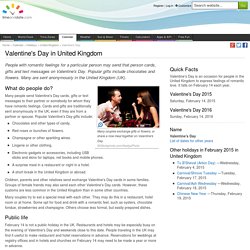 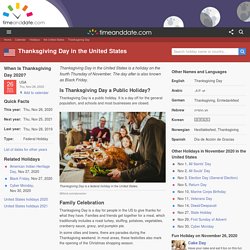 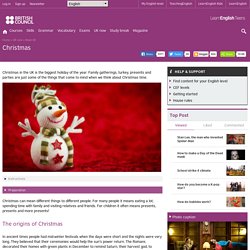 For many people it means eating a lot, spending time with family and visiting relatives and friends. For children it often means presents, presents and more presents! The origins of Christmas In ancient times people had mid-winter festivals when the days were short and the nights were very long. They believed that their ceremonies would help the sun’s power return. Cards and presents It’s very common to send Christmas cards to friends, family, colleagues, classmates and neighbours in the weeks leading up to 25 December.

Christmas presents are reserved for close friends and family. Father Christmas (aka Santa Claus) Every year small children tell Father Christmas, also known as Santa Claus, exactly what presents they would like to receive. The Christmas number one Every year, for a few weeks around Christmas time, the UK music charts go mad. However, some music fans are not happy about this dominance. Snow. Christmas in the UK, British culture, customs and traditions in December - Christmas Celebrations. With dictionary look up. 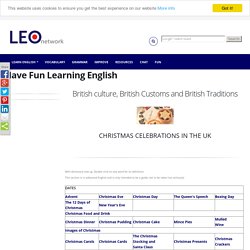 Double click on any word for its definition. This section is in advanced English and is only intended to be a guide, not to be taken too seriously! Advent - (Four Sundays Before Christmas) Advent is not widely celebrated in England, its celebration actually originated in Germany, although in the church calendar Advent is the official start of the run up to Christmas. Two traditions that have caught on in England are the Advent calendar and the Advent candle. An Advent candle often has 25 marks on it, a bit of the candle is burned down by one mark each day. New Year's Eve in United Kingdom. December 31 is known as Hogmanay in Scotland and New Year's Eve in England, Wales and Northern Ireland. 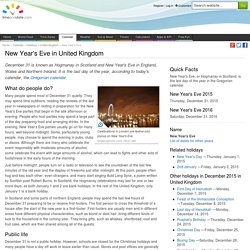 It is the last day of the year, according to today's calendar, the Gregorian calendar. What do people do? Many people spend most of December 31 quietly. They may spend time outdoors, reading the reviews of the last year in newspapers or resting in preparation for the New Year's Eve parties that begin in the late afternoon or evening. People who host parties may spend a large part of the day preparing food and arranging drinks. Just before midnight, people turn on a radio or television to see the countdown of the last few minutes of the old year and the display of fireworks just after midnight.

In Scotland and some parts of northern England, people may spend the last few hours of December 31 preparing to be or receive first-footers. Public life December 31 is not a public holiday. Background Midwinter celebrations have been held by the people of the British Isles since ancient times. Learn American Holidays - New Year's Day Holiday. LearnEnglishTeens. Flying witches, pumpkin lanterns, trick or treat ... 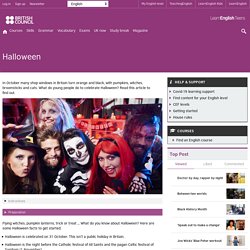 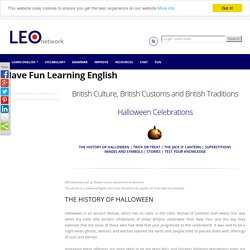 Double click on any word for its definition. This section is in advanced English and is only intended to be a guide, not to be taken too seriously! The History of Halloween Halloween is an ancient festival, which has its roots in the Celtic festival of Samhain (Sah-ween), this was when the Celts (the ancient inhabitants of Great Britain) celebrated their New Year and the day they believed that the souls of those who had died that year progressed to the underworld. It was said to be a night when ghosts, demons and witches roamed the earth and people tried to placate them with offerings of nuts and berries.

Nowadays these offerings are more likely to be the Mars Bars and Snickers (formerly Marathons) given out to children trick or treating, but it remains a day when we can acknowledge our fears and celebrate forces we do not understand. Halloween in United Kingdom. Halloween is a holiday annually celebrated on October 31. 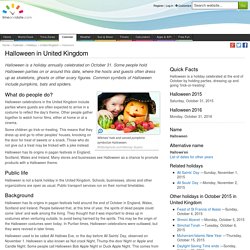 Some people hold Halloween parties on or around this date, where the hosts and guests often dress up as skeletons, ghosts or other scary figures. Common symbols of Halloween include pumpkins, bats and spiders. What do people do? Halloween celebrations in the United Kingdom include parties where guests are often expected to arrive in a costume to reflect the day's theme. Other people gather together to watch horror films, either at home or at a cinema. Bet You Didn't Know This About Halloween!