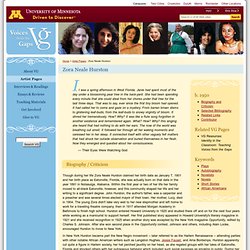 Janie had spent most of the day under a blossoming pear tree in the back-yard. She had been spending every minute that she could steal from her chores under that tree for the last three days. That was to say, ever since the first tiny bloom had opened. It had called her to come and gaze on a mystery. Biography / Criticism. Black History - Biographies - Zora Neale Hurston. Folklore in Zora Neale Hurston's "Their Eyes Were Watching God" In the years since Alice Walker's famous "rediscovery" of Zora Neale Hurston, Hurston's work has received new and richly deserved attention from high school English teachers. 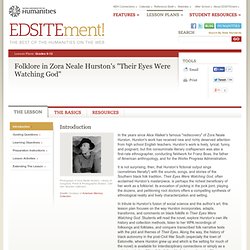 Hurston's work is lively, lyrical, funny, and poignant, but this consummate literary craftsperson was also a first-rate ethnographer, conducting fieldwork for Franz Boas, the father of American anthropology, and for the Works Progress Administration. Zora Neale Hurston's Mules and Men and E-Project: Miguel Covarrubias.

>At the time of Mule and Men's publication, the illustrator of the text, Miguel Covarrubias, had already acquired much renown and it is his illustrations perhaps more than the text itself that first validated the work. 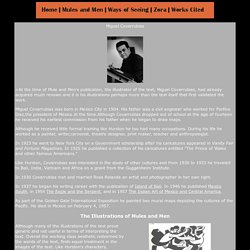 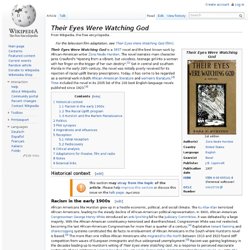 The novel narrates main character Janie Crawford's "ripening from a vibrant, but voiceless, teenage girl into a woman with her finger on the trigger of her own destiny". [ 1 ] Set in central and southern Florida in the early 20th century, the novel was initially poorly received for its rejection of racial uplift literary prescriptions. Today, it has come to be regarded as a seminal work in both African-American literature and women's literature . [ 2 ] Time included the novel in its 2005 list of the 100 best English-language novels published since 1923. [ 3 ] Historical context [ edit ] Racism in the early 1900s [ edit ] African Americans like Hurston grew up in a hostile economic, political, and social climate.

The Racial Uplift program [ edit ] Zora's Place. On a mid-August day with a heat index of 115 degrees, in a rental car with slow pickup, I drive through the Orlando suburbs searching for Eatonville, a three-square-mile town of 2,400 residents. 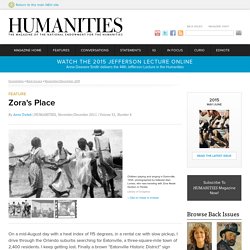 I keep getting lost. Finally a brown “Eatonville Historic District” sign appears, and fifteen miles later it dawns on me that I have gone too far. I turn back, find the city limits, and enter Eatonville. At the “Welcome to Maitland” sign, I realize I have driven through the entire town. Hurston/Wright Foundation. Marita Golden Founder and Interim Executive Director The Zora Neale Hurston/Richard Wright Foundation is a resource for a world of Black writers and the readers who love them. 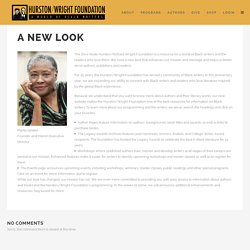 We have a new look that enhances our mission and message and helps us better serve authors, publishers and readers. For 25 years, the Hurston/Wright Foundation has served a community of Black writers. In this anniversary year, we are expanding our ability to connect with Black writers and readers who love literature inspired by the global Black experience. Because we understand that you want to know more about authors and their literary works, our new website makes the Hurston/Wright Foundation one of the best resources for information on Black writers. Author Pages feature information on authors’ backgrounds, book titles and awards, as well as links to purchase books.The Legacy Awards Archives features past nominees, winners, finalists, and College Writer Award recipients. Zora Neale Hurston - Books & Audio.

"One of the greatest writers of our time" — Toni Morrison The epic tale of Janie Crawford, whose quest for identity takes her on a journey during which she learns what love is, experiences life's joys and sorrows, and come home to herself in peace. 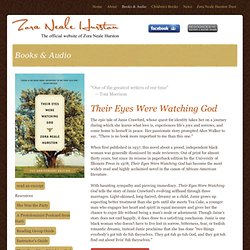 Her passionate story prompted Alice Walker to say, "There is no book more important to me than this one. " When first published in 1937, this novel about a proud, independent black woman was generally dismissed by male reviewers. Their Eyes Were Watching God by Zora Neale Hurston. The Great Migration. 1928 - Okeechobee - When the hurricane roared ashore at Palm Beach September 16, 1928, many coastal residents were prepared. 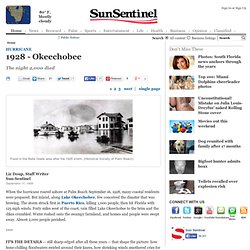 But inland, along Lake Okeechobee, few conceived the disaster that was brewing. The storm struck first in Puerto Rico, killing 1,000 people, then hit Florida with 125 mph winds. Forty miles west of the coast, rain filled Lake Okeechobee to the brim and the dikes crumbled. Water rushed onto the swampy farmland, and homes and people were swept away. Almost 2,000 people perished. IT'S THE DETAILS -- still sharp-edged after all these years -- that shape the picture: how bone-chilling floodwaters swirled around their knees, how shrieking winds smothered cries for help, how pelting rain felt like needles piercing skin. Pay attention, please, to the details they offer, no matter how painful a picture they create. How many died in that terrible tragedy? Zora Neale Hurston: What White Publishers Won’t Print. 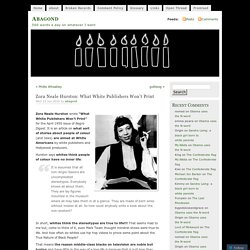 It is an article on what sort of stories about people of colour (and Jews) are aimed at White Americans by white publishers and Hollywood producers. Hurston says whites think people of colour have no inner life: It is assumed that all non-Anglo-Saxons are uncomplicated stereotypes. Everybody knows all about them. In short, whites think the stereotypes are true to life!!! That means the reason middle-class blacks on television are noble but boring and have little in the way of a love life is because that is just how they seem to white screenwriters! Or take “Shaft” (1971): the hero, “a sex machine to all the chicks” as we are informed in the opening song, has sex with three women but loves none of them – he even pointedly avoids the L-word. Florida Memory - Audio - Zora Neale Hurston. The following represents a sample of Zora Neale Hurston music from the Folklife Collection. 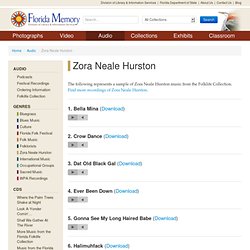