Automatic, self-locking, chicken coop door. Auto Coop Door Prototype : Nifty-Stuff.com. Rest In Peace Ming-Ming Duck After years of thinking about this, and after 2 separate raccoon attacks I finally found some time to create a prototype / proof of concept of my auto chicken coop door closer. You can read the details of the initial design here: The most recent coon attack was 3 weeks ago when a gang of 4 coons came into the coop just an hour after sunset. They were able to kill a hen and our only duck before I got out there to scare them away. It is a terrible feeling knowing that if you had only gone out a few moments earlier that everybody would be fine.

It only takes a single night of forgetting, or not getting home in time to lock up the coop and an entire flock could be destroyed. As stated in my original auto chicken coop door plans, I only needed a design that would close the door in case we forgot or couldn’t make it home in time. Here is the BETA Version 1.0 Open & Close. Automatic Chicken Coop Door : Nifty-Stuff.com. Rest In Peace Grey Chicken I’ve been wanting to design an automatic chicken coop door closer for years.

There are plenty of other systems out there that automatically open and close the coop door, but they are expensive and, well, not designed by me! Basically my idea is to create a simple system that is a “safety net” in case we don’t remember to lock our girls in at night. I have no problems letting the girls out in the morning, but I want to ensure they are closed up safe in the evening. Www.kei.co.nz/A000185B PicPatch Geting Started.pdf.

Powerful Gearmotor and Solar Panel Set-The Electronic Goldmine. Automatic_chicken_coop_door [Renewable Energy Monitor] Automatic chicken door version two. As it is getting cold again and my chickens made it through the summer just fine, it is time to revisit and revitalize my automatic chicken door. The older model was a large door that slid on a track that would get leaves, snow, and ice messing the whole thing up. Also the mecanisim that opened the door was a string that tension was held on with springs, the string would knot up and stop working, blowing the fuse sometimes. There is an older version of this project and you can read about it here. Automated Chicken Coop Door. Analysis: The assumption here is that the sunrise/set timetable is one sinus wave, the rest is scaling and translating a bit sunrise = int (350 + ( 90*cos( ((((month-1)*30.5)+dayOfMonth)+8) /58.1) )); The part: (month-1)*30.5 + dayOfMonth + 8 This is a formula for dayoftheyear with a small offset 8 days. 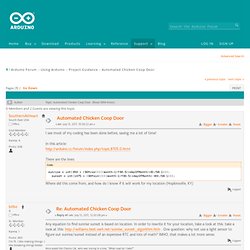 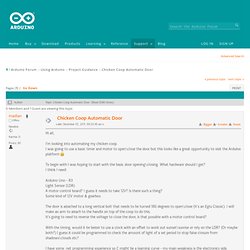 Chicken Coop Door open/close. I keep forgetting to close the coop door so I automated the door with an Arduino, a linear actuator from Firgelli Automations, four solid state relays from Fotek (in hindsight this is super over designed), and a real time clock from Sparkfun (uses i2c). 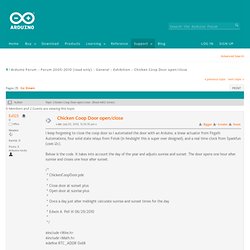 Below is the code. It takes into account the day of the year and adjusts sunrise and sunset. The door opens one hour after sunrise and closes one hour after sunset. /* * ChickenCoopDoor.pde * * Close door at sunset plus * Open door at sunrise plus * * Once a day just after midnight calculate sunrise and sunset times for the day * * Edwin A. Pell III 06/29/2010 * */ #include <Wire.h>#include <Math.h>#define RTC_ADDR 0x68 int current_day;int door_opened;int door_closed;int sunrise; // in minutes from midnightint sunset; // in minutes from midnight. Automatic Chicken Coop Door Openers. Add-A-Motor Chicken Coop Motor. Products. Products - Tired of going out in the rain and cold to lock the chicken coop? - Frustrated with losing your favorite hen when you forget to lock the coop? Good news, those days are over! Introducing the unchallenged BEST automatic chicken door on the market!

Quality is found in the details. There are so many quality-oriented details that we've had to create a page just for it (click Quality above). Light Sensitive Chicken Coop Door. Hi, I recently started keeping my own chickens and have really enjoyed the whole experience. The chickens were all really friendly and provided hours of amusement. Until a few weeks ago I had 4 of our feather friends in a nice Coop. That was fine until one night, for the first time ever, we forgot to close the door to the coop. Unfortunatley the fantastic Mr Fox must have been casing the joint for some time and siezed his opportunity. Three of the chickens were nowhere to be seen, the fourth lay dead under our rhubarb. Have a 12v 15mA motor (4rpm), 12v 5AH lead-acid battery, and 4.5v/50mA solar panel. Building chicken door. I've already built a chicken door with a $100 drapery motor, but this seems overpriced to me, when there are so many available salvage 12 v motors from old car doors.

The drapery motor is simple to use because rather than limit switches it simply uses an adjustable mechanical plastic slotted disc to manually toggle a double pole switch to operate the motor. With a timer on the line set to on/off twice a day, it's an easy build. But I want to make a standalone unit, (solar powered) using a 12v system. I have the battery, with what I think is sufficient juice, and the motor from an old Chrysler window opener. I'm hoping to keep the battery "topped off" with the solar panel. Automatic chicken coop door opener. Automatic Chicken Coop. Growing up on a farm, there were many unpleasant tasks. 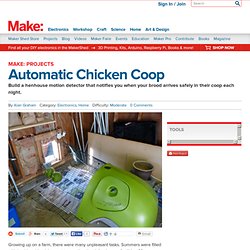 Summers were filled with backbreaking labor, not to mention the daily chores of milking 80 or so cows and collecting the eggs and feeding the chickens. I now live in the city of Portland, Ore., and I’ve come to miss those farm days of 20 years ago. When I decided to get a couple of chickens, I was adamant that the work involved wouldn’t seem like work. Gone are the days where I’d wake before dawn to get to the barn or prepare for a cold day chopping wood. These days it’s all about waking with the sun. One of the delightful aspects of chickens is that they’re low-maintenance. And seeing as I’m now a lazy, citified man, I wanted a solution that allowed for late mornings, weekend getaways, peace of mind, and avoiding any possible exposure to the elements, either to let the fowl out or collect the eggs.

I created an automated henhouse in my garage with an infrared motion detector, automatic lights, heater, and automated door. Raising BackYard Chickens, Build a Chicken Coop, Pictures of Breeds. Automatic pop hole opener This is not my own idea. We got the idea from a fellow BYCer. We now have two coops (imagine that) and our first automatic door opener was first installed in February of 09. It has been happily pulling open and pushing closed our fiberglass coop door since then without a problem. The instructions are quite easy and can be accomplished by someone with the skill level of an intermediate handy person. Material list: THE DIYers photos. Chicken coop automatic door. DIY solar powered automatic chicken coop door opener. Christian Wolpert's automatic chicken coop door opener and closer is the second one I've seen so far that is completely off the grid and designed to work on a battery that gets charged with a solar panel.

It uses an MSP430 microcontroller as the brain along with a customized Linux source code that Christian is kindly offering as a free download. I know building and programming your own microcontroller can sound advanced, but Christian describes a clever short cut where he makes use of a tutorial as his starting point. This trick reduces most of the number crunching work to a process of adjusting specific interrupt routines to fit your automatic coop opening needs. Chicken Coop Automatic Door. Call me crazy, but a chicken coop automatic door just might make your life easier.

Early every morning, you (or someone in your family) will have the chore of going out to the coop and letting the birds out into their run or your yard. Of course, at the same time, you are probably taking out some fresh water and chicken feed to your birds, so an automatic door may not seem like much of a necessity. However, at night, you will want to make sure your flock is safely tucked inside their coop as soon as the sun begins to set.

Many of their predators are nocturnal and attack under the cover of dark. If you are delayed at the office or enjoying a night out on the town with your family and friends, you may not like what you come home to find. Automated chicken coop door. IT LIVES!! Chris and Keri’s Blog » Automatic Chicken Door. Introduction My wife and I started raising chickens this year. A few days after we moved them out to the coop, the novelty of going out in the morning to let them out and in the evening to lock them up began to wear off. We needed an automatic door opener! Being an engineer, and a cheapskate, I decided to build one myself rather than shell out over $200 for a commercial one (of questionable quality). I can do questionable quality myself, thank you very much. Automated chicken coop door is solar-powered.