Mental_floss Blog &amp; The Quick 10: 10 Things You Didn’t Know Had Names - StumbleUpon. 1. You know how it smells after it rains? That clean, greenish smell when rain lands on dry ground? That’s petrichor , from the Greek petra (stone) and ichor (the blood of Greek gods and goddesses). The term was coined by two Australian researchers in 1964. 2. 3. 4. 5. 6.

Site. 20 Obsolete English Words that Should Make a Comeback. Photo: Katherine Hodgson If we all start using them, these words can be resurrected. 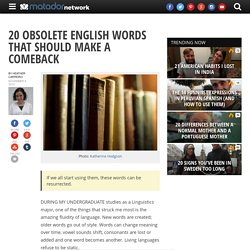 DURING MY UNDERGRADUATE studies as a Linguistics major, one of the things that struck me most is the amazing fluidity of language. New words are created; older words go out of style. Words can change meaning over time, vowel sounds shift, consonants are lost or added and one word becomes another. Living languages refuse to be static. The following words have sadly disappeared from modern English, but it’s easy to see how they could be incorporated into everyday conversation. Words are from Erin McKean’s two-volume series: Weird and Wonderful Words and Totally Weird and Wonderful Words. 25 Everyday Things You Never Knew Had Names: Pics, Videos, Links, News. Another 25 Words you Don’t Know. Humans. 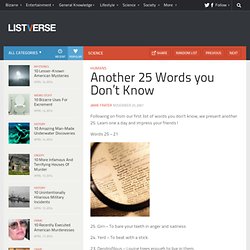 10 Curse Words You Don't Know. That’s one version of what happened at Waterloo and it’s a load of old cambronne, but the fact is that no-one seems to know the truth. 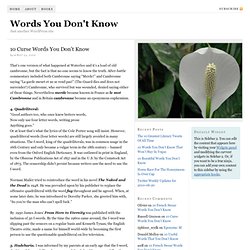 After-battle commentary included both Cambronne saying “Merde!” And Cambronne saying “La garde meurt et ne se rend pas!” (The Guard dies and does not surrender!) Cambronne, who survived but was wounded, denied saying either of these things. Nevertheless merde became known in France as le mot Cambronne and in Britain cambronne became an eponymous euphemism. 4. Norman Mailer tried to reintroduce the word in his novel The Naked and the Dead in 1948. By 1950 James Jones’ From Here to Eternity was published with the inclusion of 50 f-words. 5. Later on in life, when I saw Reservoir Dogs at the movies, I realized that Quentin Tarantino must have run into exactly the same group of guys. What concepts do not exist in the English language?

Carl Honoré (In Praise of Slow) says Canada's Baffin Island Inuit "use the same word—'uvatiarru'—to mean both 'in the distant past' and 'in the distant future.' Time, in such cultures, is always coming as well as going. 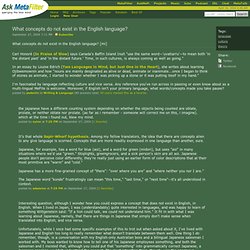 " In an essay by Louise Edrich (Two Languages in Mind, but Just One in the Heart), she writes about learning Ojibwemownin and how "nouns are mainly desginated as alive or dead, animate or inanimate...once I began to think of stones as animate, I started to wonder whether I was picking up a stone or it was putting iteslf in my hand. " I'm fascinated by language reflecting culture and vice versa. Another 25 Words you Don’t Know. Lexipedia - Where words have meaning. Find Similar or Opposite words at WordHippo.com. 10 Insulting Words You Should Know. There is a crisis of insults on the Web. 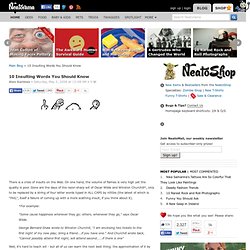 On one hand, the volume of flames is very high yet the quality is poor. Gone are the days of the razor-sharp wit of Oscar Wilde and Winston Churchill*, only to be replaced by a string of four letter words typed in ALL CAPS by n00bs (the latest of which is “FAIL”, itself a failure of coming up with a more scathing insult, if you think about it). *For example:"Some cause happiness wherever they go; others, whenever they go," says Oscar Wilde.George Bernard Shaw wrote to Winston Churchill, "I am enclosing two tickets to the first night of my new play; bring a friend....if you have one. " And Churchill wrote back, "Cannot possibly attend first night, will attend second......if there is one" Well, it’s hard to teach wit - but all of us can learn the next best thing: the approximation of it by obfuscation, i.e. using big, difficult, and obscure words. 1.

Analysis: We have the English to thank for this word. 100 Most beautiful words in the English language* 20 Obsolete English Words that Should Make a Comeback. 10 Insulting Words You Don’t Know. “Sticks and stones will break my bones, but names will never hurt me.” 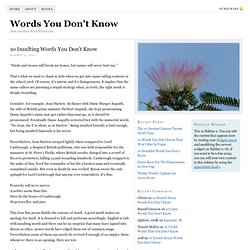 That’s what we used to chant as kids when we got into name calling contests in the school yard. Of course, it’s untrue and it’s disingenuous. It implies that the name callers are pursuing a stupid strategy when, in truth, the right insult is deeply wounding. Consider, for example, Jean Harlow. At dinner with Dame Margot Asquith, the wife of British prime minister Herbert Asquith, she kept pronouncing Dame Asquith’s name mar-got rather than mar-go, as it should be pronounced. Nevertheless, Jean Harlow escaped lightly when compared to Lord Castlereagh, a despised British politician, who was held responsible for the massacre at St.

Posterity will ne’er survey A nobler scene than this. This four line poem distills the essence of insult. 1. 2. 3.