News. Why So Many Americans Are Trapped in ‘Deep Poverty’ While politicians in both parties continue to voice concern about the economic plight of the middle class, a more urgent crisis may be the growth in the number of American families trapped in “deep” or “extreme” poverty. 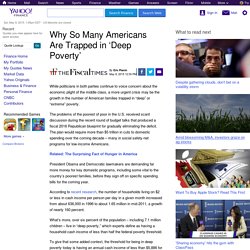 The problems of the poorest of poor in the U.S. received scant discussion during the recent round of budget talks that produced a fiscal 2016 Republican blueprint for gradually eliminating the deficit. The plan would require more than $5 trillion in cuts to domestic spending over the coming decade – many in social safety-net programs for low-income Americans. Related: The Surprising Fact of Hunger in America President Obama and Democratic lawmakers are demanding far more money for key domestic programs, including some vital to the country’s poorest families, before they sign off on specific spending bills for the coming year. Related: Puzzling Rise in Food Stamp Use as Economy Improves. Are the Quantum World and The Real World the Same Thing? - The Nature of Reality — The Nature of Reality. While quantum mechanics is arguably our most successful theory of nature, it is perhaps best known for its strangeness. 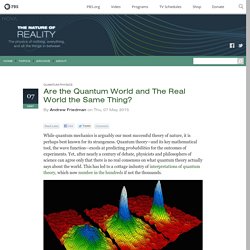 Quantum theory—and its key mathematical tool, the wave function—excels at predicting probabilities for the outcomes of experiments. Yet, after nearly a century of debate, physicists and philosophers of science can agree only that there is no real consensus on what quantum theory actually says about the world. This has led to a cottage industry of interpretations of quantum theory, which now number in the hundreds if not the thousands.

138 Influences Related To Achievement - Hattie effect size list. John Hattie developed a way of ranking various influences in different meta-analyses related to learning and achievement according to their effect sizes. 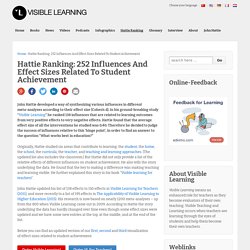 In his ground-breaking study “Visible Learning” he ranked 138 influences that are related to learning outcomes from very positive effects to very negative effects. Hattie found that the average effect size of all the interventions he studied was 0.40. Therefore he decided to judge the success of influences relative to this ‘hinge point’, in order to find an answer to the question “What works best in education?”

Hattie studied six areas that contribute to learning: the student, the home, the school, the curricula, the teacher, and teaching and learning approaches. 'A God That Could Be Real' In The Scientific Universe : 13.7: Cosmos And Culture. The star in the center, as seen by the Hubble Space Telescope, is known as V1331 Cyg and is located in the dark cloud LDN 981. 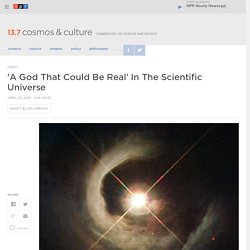 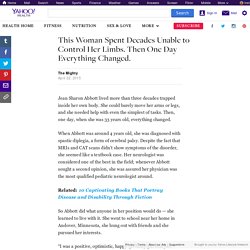 She could barely move her arms or legs, and she needed help with even the simplest of tasks. Then, one day, when she was 33 years old, everything changed. When Abbott was around 4 years old, she was diagnosed with spastic diplegia, a form of cerebral palsy. Despite the fact that MRIs and CAT scans didn’t show symptoms of the disorder, she seemed like a textbook case. Suffering from abuse during childhood increases the chances of depression, above all in those adults who are genetically predisposed. Printer friendly version Share 13 April 2015 University of Granada An international research project led by scientists from the U. of Granada has demonstrated that the risk of suffering from depression due to abuse during childhood is significantly higher in those patients who are genetically predisposed. 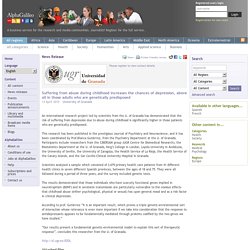 This research has been published in the prestigious Journal of Psychiatry and Neuroscience, and it has been coordinated by Prof.Blanca Gutiérrez, from the Psychiatry Department at the U. of Granada. The Number One Cause Of Depression — Everywhere. This harmful experience can greatly increase someone’s odds for having depression — more so if you’re genetically prone to it. 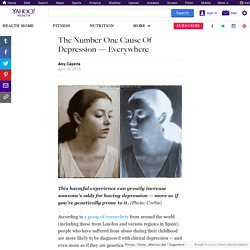 (Photo: Corbis) According to a group of researchers from around the world (including those from London and various regions in Spain), people who have suffered from abuse during their childhood are more likely to be diagnosed with clinical depression — and even more so if they are genetically predisposed to the condition. Over a three-year period, scientists analyzed patients from 41 different health clinics in seven Spanish provinces who ranged in age from 18 to 75. And here’s what they discovered through genetic testing: The participants who were shown to have limited gene function implied in both BDNF (brain-derived neurotrophic factor, a protein-coding gene) and serotonin transmission were extra-sensitive to the damaging effects of child abuse — whether the abuse was psychological, physical or sexual. In autism, the brain&apos;s response to speech speaks volumes. When language delays or social detachment mark a baby for a diagnosis of autism, dark clouds cast that child's future in shadow. 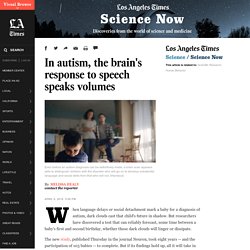 But researchers have discovered a test that can reliably forecast, some time between a baby's first and second birthday, whether those dark clouds will linger or dissipate. The new study, published Thursday in the journal Neuron, took eight years -- and the participation of 103 babies -- to complete. But if its findings hold up, all it will take in the future to clarify an autistic child's prognosis is a nap, a mellifluous nursery rhyme and a magnetic resonance imaging scanner. The new research demonstrates that even in sleep -- and at an age when even some normally developing babies also lack words -- a baby's brain response to spoken language can reveal whether that child is likely to develop speech, comprehension and social skills or whether his social and expressive disabilities are likely to remain profound. 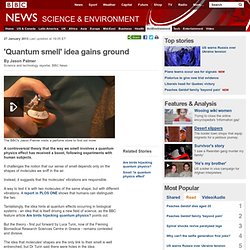 It challenges the notion that our sense of smell depends only on the shapes of molecules we sniff in the air. Instead, it suggests that the molecules' vibrations are responsible. In quantum theory of cognition, memories are created by the act of remembering. (Phys.org) —The way that thoughts and memories arise from the physical material in our brains is one of the most complex questions in modern science. 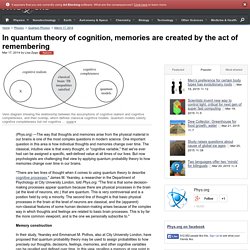 One important question in this area is how individual thoughts and memories change over time. The classical, intuitive view is that every thought, or "cognitive variable," that we've ever had can be assigned a specific, well-defined value at all times of our lives. But now psychologists are challenging that view by applying quantum probability theory to how memories change over time in our brains.

"There are two lines of thought when it comes to using quantum theory to describe cognitive processes," James M. Yearsley, a researcher in the Department of Psychology at City University London, told Phys.org. Discovery of quantum vibrations in 'microtubules' inside brain neurons supports controversial theory of consciousness. Quantum Entanglement Links 2 Diamonds. Diamonds have long been available in pairs—say, mounted in a nice set of earrings.

But physicists have now taken that pairing to a new level, linking two diamonds on the quantum level. Skeptic's Toolbox. Held every August since 1992, the Skeptic's Toolbox was formed by psychologist and now-retired University of Oregon professor Ray Hyman. The workshop, held over four days, focuses on making people into better critical thinkers by investigating a central theme. The attendees are broken up into groups and given tasks that they must work on together and present in front of the entire group on the last day. The Skeptic's Toolbox is sponsored by the Committee for Skeptical Inquiry. History[edit] 'Telepathy' experiment sends 1st mental message. Washington (AFP) - For the first time, scientists have been able to send a simple mental message from one person to another without any contact between the two, thousands of miles apart in India and France.

Research led by experts at Harvard University shows technology can be used to transmit information from one person's brain to another's even, as in this case, if they are thousands of miles away. "It is kind of technological realization of the dream of telepathy, but it is definitely not magical," Giulio Ruffini, a theoretical physicist and co-author of the research, told AFP by phone from Barcelona. "We are using technology to interact electromagnetically with the brain. " For the experiment, one person wearing a wireless, Internet-linked electroencephalogram or EEG would think a simple greeting, like "hola," or "ciao. " A computer translated the words into digital binary code, presented by a series of 1s or 0s.

Woman's Lack of Cerebellum Goes Undiagnosed for 24 Years. Doctors in China were surprised to find that a young woman who had lived a normal life for more than two decades was actually missing an important part of her brain, according to a new report of her case. The 24-year-old's strange condition was discovered when she went to doctors because of a monthlong bout of nausea and vomiting. The patient told the doctors she had also experienced dizziness her entire life. She didn't start walking until she was four and had never been able to walk steadily. When the doctors scanned the woman's brain, they found she had no cerebellum, a region of the brain thought to be crucial for walking and other movements.

Instead, the scans showed a large hole filled with cerebrospinal fluid. [16 Oddest Medical Case Reports] MIT Researcher’s New Warning: At Today’s Rate, Half Of All U.S. Children Will Be Autistic By 2025. Nick Meyer, althealthworks.com Research scientist Stephanie Seneff of the Massachusetts Institute of Technology (MIT), a widely published author on topics ranging from Azlheimer’s Disease to autism and cardiovascular disease, raised plenty of eyebrows recently with a bold proclamation on autism at a special panel in Massachusetts about genetically modified organisms and other topics. “At today’s rate, by 2025, one in two children will be autistic,” Seneff said last Thursday in Groton, MA at an event sponsored by the holistic-focused Groton Wellness organization. Seneff presented slides showing a remarkably consistent correlation between the rising use of Roundup (with its active ingredient glyphosate) on crops and the rising rates of autism; while it doesn’t show a direct correlation it does give researchers plenty to think about, especially considering Seneff’s research into the side effects of autism that mimic glyphosate toxicity and deficiencies.

How Much of the Brain Can a Person Do Without? Meet the girl with half a brain - today > health. Amazing stories of the brain. Dear colleagues, The man with the missing brain. Intact Bilateral Resting-State Networks in the Absence of the Corpus Callosum. Introduction How is information processed by the brain so as to generate cognition, behavior, and conscious experience? Unexplained communication between brain hemispheres without corpus callosum. Magnetic resonance images comparing a healthy subject (left) with an AgCC patient (right). Man with tiny brain shocks doctors - health - 20 July 2007. Can you live a normal life with half a brain? Teacher depression may affect child learning.

The 13 worst mistakes people make in their 20s. Cost of Illegal Immigrants. The economic benefits of being beautiful. 14 facts that help explain America's child-migrant crisis. Meet Jibo: The World's First Family Robot. Veteran With Concealed Carry Permit Shoots Back At Chicago Gunman. Epic Demographic Chart Shows What's Happening To The Populations Of The US, China, And Japan. Bullying. Mark Zuckerberg gave New Jersey $100 million to fix Newark's schools, and it looks like it was a waste. Do What You Love For Good. The Future of Learning.