The Ukulizer. Uke Minutes 92 – Diminished Run Exercise. Fake Strums Tutorial. The fake strum is a simple technique that I use a lot in my arrangements. 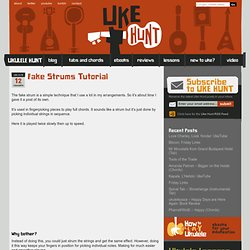 So it’s about time I gave it a post of its own. It’s used in fingerpicking pieces to play full chords. It sounds like a strum but it’s just done by picking individual strings in sequence. Here it is played twice slowly then up to speed. Why bother? Instead of doing this, you could just strum the strings and get the same effect. Here’s a quick video combining picking and fake strums. In Tab There isn’t any established tab for this as far as I know. Twoandthreechordsongs.pdf (application/pdf Object) Uke Scales - Three Notes Per String Method. Hey guys! 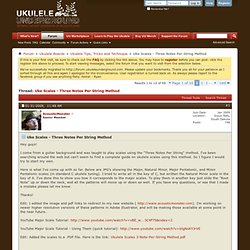 I come from a guitar background and was taught to play scales using the "Three Notes Per String" method. I've been searching around the web but can't seem to find a complete guide on ukulele scales using this method. So I figure I would try to start my own.Here is what I've come up with so far. Below are JPG's showing the Major, Natural Minor, Major Pentatonic, and Minor Pentatonic scales (in standard C ukulele tuning). I tried to write all in the key of C, but written the Natural Minor scale in the key of A. Uke Lesson 33 – Good Riddance (Time of Your Life) The Circle: Diminished Chords Are Square! Jazzukes - Ukulele Fake Book Project. Play Ukulele By Ear. Circle of fifths. Circle of fifths showing major and minor keys Nikolay Diletsky's circle of fifths in Idea grammatiki musikiyskoy (Moscow, 1679) In music theory, the circle of fifths (or circle of fourths) is a visual representation of the relationships among the 12 tones of the chromatic scale, their corresponding key signatures, and the associated major and minor keys. 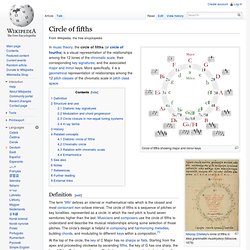 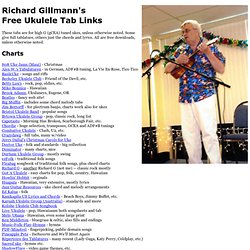 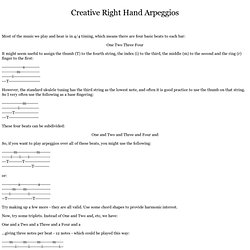 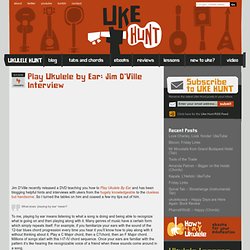 So I turned the tables on him and coaxed a few my tips out of him. What does ‘playing by ear’ mean? To me, playing by ear means listening to what a song is doing and being able to recognize what is going on and then playing along with it. Many genres of music have a certain form which simply repeats itself. For example, if you familiarize your ears with the sound of the 12-bar blues chord progression every time you hear it you’ll know how to play along with it without thinking about it.

Why is it important for ukulele players to learn to play by ear? Play Ukulele by Ear: Jim D’Ville Interview.