12 Primary Pros and Cons of Paying College Athletes. Thousands of fans gathering around to watch their favorite players and teams compete for the title of the “greatest”. 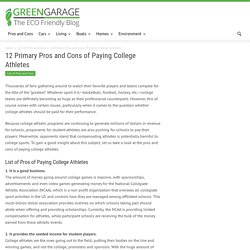 Whatever sport it is—basketball, football, hockey, etc. —college teams are definitely becoming as huge as their professional counterparts. However, this of course comes with certain issues, particularly when it comes to the question whether college athletes should be paid for their performance. Should College Athletes be Paid: Pros & Cons. According to N.C.A.A. rules, college athletes are not to receive any windfall from any merchandise sold- even if they are tho only reason people buy it. 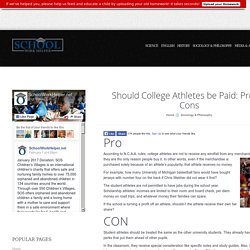 In other words, even if the merchandise is purchased solely because of an athlete’s popularity, that athlete receives no money. 15 Big Pros and Cons of Paying College Athletes. Many college students play for their school teams in exchange for a scholarship grant. 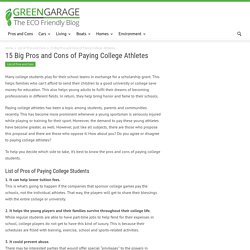 This helps families who can’t afford to send their children to a good university or college save money for education. This also helps young adults to fulfil their dreams of becoming professionals in different fields. In return, they help bring honor and fame to their schools. Paying college athletes has been a topic among students, parents and communities recently.

7 Most Notable Pros and Cons of Paying College Athletes. College sports is a rapidly growing industry in the United States. 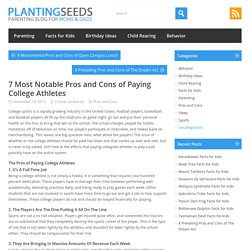 Football players, basketball, and baseball players all fill up the stadiums on game night, go out and put their personal health on the line, to bring that win to the school. The school charges people for tickets, monetizes off of television air time, has players participate in interviews, and makes bank on merchandising. This leaves one big question here, what about the players? The issue of whether or not college athletes should be paid has been one that comes up over and over, but is never truly solved. Let’s look at the effects that paying collegiate athletes to play could possibly have on the entire system. Should College Athletes Get Paid Pros and Cons List. Playing sports of any kind comes with associated risks, which is why pro athletes are some of the highest paid individuals in the industry. 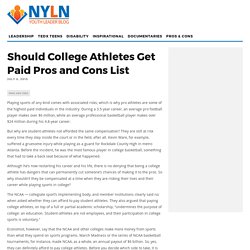 During a 3.5-year career, an average pro football player makes over $6 million, while an average professional basketball player makes over $24 million during his 4.8-year career. But why are student-athletes not afforded the same compensation? They are still at risk every time they step inside the court or in the field, after all. Kevin Ware, for example, suffered a gruesome injury while playing as a guard for Rockdale County High in metro Atlanta. Before the incident, he was the most famous player in college basketball, something that had to take a back seat because of what happened.

Although he’s now restarting his career and his life, there is no denying that being a college athlete has dangers that can permanently cut someone’s chances of making it to the pros. Should Students Get Paid for Good Grades? Cash for Good Grades? Some Schools Give It a Try. It used to be that earning an “A” was enough of a reward for doing well in school. 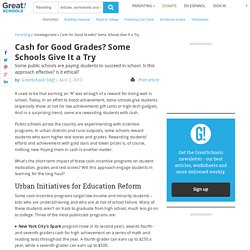 Today, in an effort to boost achievement, some schools give students (especially those at risk for low achievement) gift cards or high-tech gadgets. And in a surprising trend, some are rewarding students with cash. Public schools across the country are experimenting with incentive programs. In urban districts and rural outposts, some schools reward students who earn higher test scores and grades. Rewarding students’ efforts and achievement with gold stars and token prizes is, of course, nothing new. What’s the short-term impact of these cash-incentive programs on student motivation, grades and test scores?

Should We Pay For Good Grades? The school year has either started or nearly started and out comes the question…. 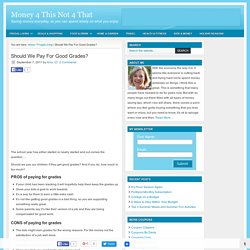 Should middle school students get paid for good grades? NEA - Cash for Grades? By Mary Ellen Flannery Do you really get what you pay for? 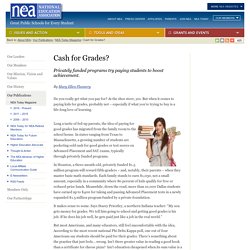 At the shoe store, yes. But when it comes to paying kids for grades, probably not – especially if what you’re trying to buy is a life-long love of learning. School Uniforms - ProCon.org. Do uniforms make schools better? For the past decade, schools, parents and students have clashed over the issue of regulating student attire. 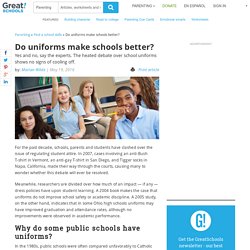 In 2007, cases involving an anti-Bush T-shirt in Vermont, an anti-gay T-shirt in San Diego, and Tigger socks in Napa, California, made their way through the courts, causing many to wonder whether this debate will ever be resolved. Meanwhile, researchers are divided over how much of an impact — if any — dress policies have upon student learning. A 2004 book makes the case that uniforms do not improve school safety or academic discipline.

A 2005 study, on the other hand, indicates that in some Ohio high schools uniforms may have improved graduation and attendance rates, although no improvements were observed in academic performance. 9 Serious Pros and Cons of Wearing School Uniforms. Should students have to wear school uniforms? 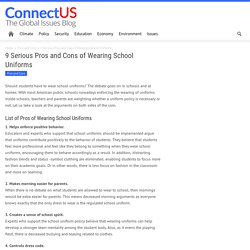 The debate goes on in schools and at homes. With most American public schools nowadays enforcing the wearing of uniforms inside schools, teachers and parents are weighting whether a uniform policy is necessary or not. Let us take a look at the arguments on both sides of the coin. Pros and Cons of School Uniforms.

Ask any school child what the pros of a school uniform are and they'll likely greet you with blank stares. If you think back to when you were a child you'll remember that most of us hated wearing a school uniform. However while it might not be entirely popular among the children, it can nevertheless have many positive benefits and if you think back to your time in school objectively now, then you can probably appreciate that fact. For parents, teachers or governors trying to decide on their viewpoint of school uniforms it can be hard to think of it objectively and to think of all the different strengths and weaknesses they poise.

Recess Debate - Middle School Library. High School and Middle School Students Deserve a Recess Break Too by Kennedy - Letters to the Next President 2.0. Dear future President, Teens between the ages of 14-18 should have at least 60 minutes a day of physical activity. When pre-teens start middle school there is no more recess (for the rest of their school life) . With many students obtaining hours of homework a night, how can it be expected that they to get 60 minutes each day of running, biking, swimming or walking? Should middle schools have recess? Recess is a very important part of school, for young and old kids. I just don't get the arguments against middle school recess. Saying middle schoolers are "too old" for recess is a completely invalid explanation who's supporting reasons are nothing that makes actual sense.

Studies show that physical activity increases blood flow to the brain, allowing students to do better with structured schoolwork. Also, don't use the "We already have P.E. /Gym classes" excuse, because the last time I checked, the more the better. Recess: Necessity or Nicety? The pressure for schools to improve student test scores is so intense that some are abandoning the childhood treasure of "recess" in lieu of more on-task time. Education World asked educators about recess practices at their schools and the importance of free time for kids to be kids.

What might their responses tell you about the importance of recess at your school? Included: Tips for a safe and productive recess period. "I believe quite strongly that there is great value in play. Play is learning lessons that often can't be learned anyplace else.