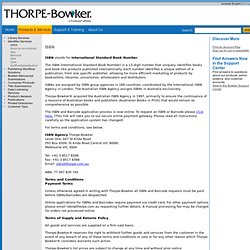 The ISBN (International Standard Book Number) is a 13-digit number that uniquely identifies books and book-like products published internationally. Each number identifies a unique edition of a publication, from one specific publisher, allowing for more efficient marketing of products by booksellers, libraries, universities, wholesalers and distributors. ISBNs are assigned by ISBN group agencies in 166 countries, coordinated by the International ISBN Agency in London. 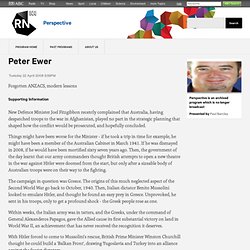 Things might have been worse for the Minister - if he took a trip in time for example, he might have been a member of the Australian Cabinet in March 1941. If he was dismayed in 2008, if he would have been mortified sixty seven years ago. Then, the government of the day learnt that our army commanders thought British attempts to open a new theatre in the war against Hitler were doomed from the start, but only after a sizeable body of Australian troops were on their way to the fighting. The campaign in question was Greece. The result could not be in doubt. Having diverted forces to Greece, the British had left North Africa open to counter attack by Erwin Rommel's Afrika Korps.

How Bracks is hiding his true intentions - OpinionKennethDavidson - www.theage.com.au. A state in need of a vision - www.theage.com.au. Author Slot - Peter Ewer"Forgotten Anzacs" Forging the Aussie Greek connection. Source: Herald Sun THE landscapes and the peoples of Melbourne and Greece seem to have almost merged in some ways. 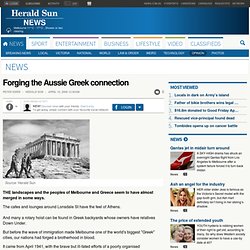 The cafes and lounges around Lonsdale St have the feel of Athens. And many a rotary hoist can be found in Greek backyards whose owners have relatives Down Under. But before the wave of immigration made Melbourne one of the world's biggest "Greek" cities, our nations had forged a brotherhood in blood. It came from April 1941, with the brave but ill-fated efforts of a poorly organised British-Anzac force to defend Greece from Nazi invasion. Many Australians - some of Greek heritage - are unaware of this joint history.

Next Saturday at the Melbourne Town Hall, the Greek community will honour "the contribution of the Hellenes to the Australian war effort in the 20th century". And 10 young Victorians will soon visit Greece as winners of the Premier's Spirit of Anzac prize. The origins go back to October 1940. 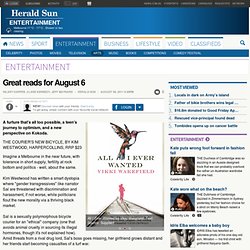 Source: Supplied All I Ever Wanted by Vikki Wakefield, Text. Source: Supplied Storm Over Kokoda, by Peter Ewer, Pier 9. Source: Supplied A furture that's all too possible, a teen's journey to optimism, and a new perspective on Kokoda. World War II's forgotten Anzacs dust off their medals and remember a fight against. WORLD War II veteran Frank Cox remembers running six kilometres as a German plane that had just dropped a bomb swooped down and shadowed him as he frantically sought escape. 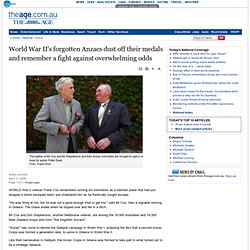 "He was firing at me, but he was not a good enough shot to get me," said Mr Cox, then a signaller serving in Greece. The chase ended when he tripped over and fell in a ditch. Mr Cox and Don Stephenson, another Melbourne veteran, are among the 18,000 Australian and 18,000 New Zealand troops who form "the forgotten Anzacs". "Anzac" has come to denote the Gallipoli campaign in World War I, eclipsing the fact that a second Anzac Corps was formed a generation later, to serve in Greece in World War II.

Like their namesakes in Gallipoli, the Anzac Corps in Greece was formed to take part in what turned out to be a strategic debacle. They faced an enemy of overwhelmingly greater numbers, were ill-equipped and suffered alarming casualties. "They forgot about us, because we got a hiding," Mr Stephenson said. How Darwin was betrayed. Target Darwin On the 70th anniversary of the attacks on Darwin, we take a look back and speak to some of the witnesses who were there. 17, 2012 "The planes came in from the south-east, and I looked up and they appeared to me like a cemetery, the white underbellies … coming across the blue sky. 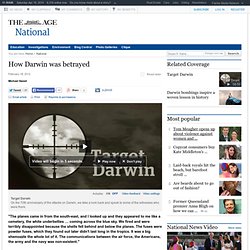