Cosmic ray. Cosmic ray flux versus particle energy The term ray is a historical accident, as cosmic rays were at first, and wrongly, thought to be mostly electromagnetic radiation. 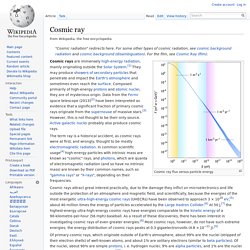 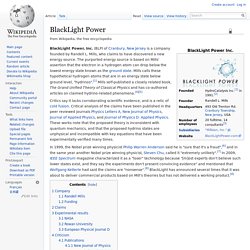 (BLP) of Cranbury, New Jersey is a company founded by Randell L. Mills, who claims to have discovered a new energy source. The purported energy source is based on Mills' assertion that the electron in a hydrogen atom can drop below the lowest energy state known as the ground state. Mills calls these hypothetical hydrogen atoms that are in an energy state below ground level, "hydrinos".[1] Mills self-published a closely related book, The Grand Unified Theory of Classical Physics and has co-authored articles on claimed hydrino-related phenomena.[4][5] Critics say it lacks corroborating scientific evidence, and is a relic of cold fusion. 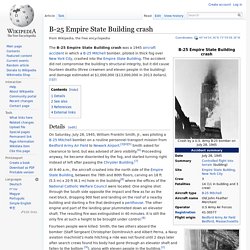 The accident did not compromise the building's structural integrity, but it did cause fourteen deaths (three crewmen and eleven people in the building) and damage estimated at $1,000,000 ($13,000,000 in 2013 dollars).[1][2] Details[edit] The plane embedded in the side of the building, 1945 On Saturday, July 28, 1945, William Franklin Smith, Jr., was piloting a B-25 Mitchell bomber on a routine personnel transport mission from Bedford Army Air Field to Newark Airport.[3][4][5] Smith asked for clearance to land, but was advised of zero visibility.[6] Proceeding anyway, he became disoriented by the fog, and started turning right instead of left after passing the Chrysler Building.[7] Cyberocracy. In futurology, Cyberocracy describes a hypothetical form of government that rules by the effective use of information. 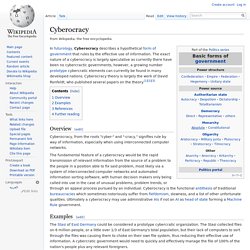 The exact nature of a cyberocracy is largely speculative as currently there have been no cybercractic governments, however, a growing number prototype cybercratic elements can currently be found in many developed nations. Cyberocracy theory is largely the work of David Ronfeldt, who published several papers on the theory.[1][2][3] Overview[edit] Cyberocracy, from the roots "cyber-" and "-cracy," signifies rule by way of information, especially when using interconnected computer networks. 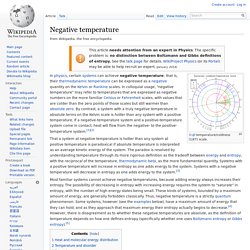 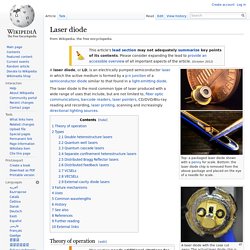 Bottom: the laser diode chip is removed from the above package and placed on the eye of a needle for scale. A laser diode with the case cut away. Q (Star Trek) Q is a fictional character who appears in the television series Star Trek: The Next Generation, Star Trek: Deep Space Nine and Star Trek: Voyager, as well as in related products. 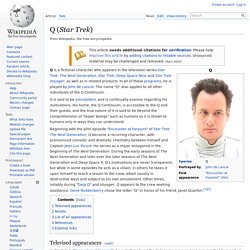 In all of these programs, he is played by John de Lancie. The name "Q" also applies to all other individuals of the Q Continuum. Q is said to be omnipotent, and is continually evasive regarding his motivations. His home, the Q Continuum, is accessible to the Q and their guests, and the true nature of it is said to be beyond the comprehension of "lesser beings" such as humans so it is shown to humans only in ways they can understand. Beginning with the pilot episode "Encounter at Farpoint" of Star Trek: The Next Generation, Q became a recurring character, with pronounced comedic and dramatic chemistry between himself and Captain Jean-Luc Picard. Bob Lazar. Robert "Bob" Lazar (/ləˈzɑr/;[2] born January 26, 1959) is the owner of United Nuclear Scientific Equipment and Supplies. 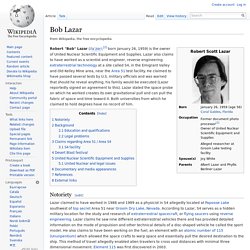 Lazar also claims to have worked as a scientist and engineer, reverse engineering extraterrestrial technology at a site called S4, in the Emigrant Valley and Old Kelley Mine area, near the Area 51 test facility. He claimed to have passed several tests by U.S. military officials and was warned that should he reveal anything, his family would be executed (Lazar reportedly signed an agreement to this). Quintessence (physics) In physics, quintessence is a hypothetical form of dark energy postulated as an explanation of the observation of an accelerating rate of expansion of the Universe announced in 1998. 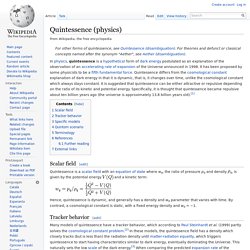 It has been proposed by some physicists to be a fifth fundamental force. Quintessence differs from the cosmological constant explanation of dark energy in that it is dynamic, that is, it changes over time, unlike the cosmological constant which always stays constant. It is suggested that quintessence can be either attractive or repulsive depending on the ratio of its kinetic and potential energy. Specifically, it is thought that quintessence became repulsive about ten billion years ago (the universe is approximately 13.8 billion years old).[1] q, is given by the potential energy. Micro black hole. Micro black holes, also called quantum mechanical black holes or mini black holes, are hypothetical tiny black holes, for which quantum mechanical effects play an important role.[1] It is possible that such quantum primordial black holes were created in the high-density environment of the early Universe (or big bang), or possibly through subsequent phase transitions. 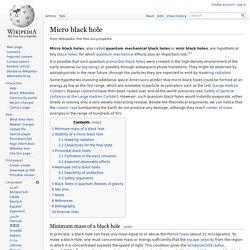 They might be observed by astrophysicists in the near future, through the particles they are expected to emit by Hawking radiation. Minimum mass of a black hole[edit] Quantum vacuum plasma thruster. A diagram illustrating the theory of Q thruster operation In 2013, the Eagleworks team also tested a device called the SFE Thruster or Serrano Field Effect Thruster built by Gravitec Inc. at the request of Boeing and DARPA. The Eagleworks team has theorized that this device is a Q-thruster.[5] A patent for this device was awarded on December 10, 2002 to the inventor, Mr.

Hector Serrano. The patent states the device produces thrust through a preselected shaping of an electric field. EmDrive. EmDrive (also RF resonant cavity thruster) is a proposed spacecraft propulsion device invented by British aerospace engineer Roger J. Shawyer, who develops prototypes at Satellite Propulsion Research Ltd (SPR),[1] the company he created for that purpose in 2000.[2] New Scientist ran a cover story on EmDrive in its 8 September 2006 issue.[3] The device uses a magnetron to produce microwaves which are directed into a metallic, fully enclosed conically tapered high Q resonant cavity with a greater area at the large end of the device, and a dielectric resonator in front of the narrower end.

The inventor claims that the device generates a directional thrust toward the narrow end of the tapered cavity. The device (engine) requires an electrical power source to produce its reflecting internal microwaves but does not have any moving parts or require any reaction mass as fuel. The device, its mode of operation, and theories attempting to explain it are all controversial. Cannae drive[edit] Wilhelm Reich. Wilhelm Reich (/raɪx/; German: [ʀaɪç], 24 March 1897 – 3 November 1957) was an Austrian psychoanalyst, a member of the second generation of psychoanalysts after Sigmund Freud, and one of the most radical figures in the history of psychiatry.

He was the author of several influential books, most notably Character Analysis (1933) and The Mass Psychology of Fascism (1933).[2] His work on character contributed to the development of Anna Freud's The Ego and the Mechanisms of Defence (1936), and his idea of muscular armour – the expression of the personality in the way the body moves – shaped innovations such as body psychotherapy, Fritz Perls's Gestalt therapy, Alexander Lowen's bioenergetic analysis, and Arthur Janov's primal therapy.

His writing influenced generations of intellectuals: during the 1968 student uprisings in Paris and Berlin, students scrawled his name on walls and threw copies of The Mass Psychology of Fascism at the police.[3] Early life[edit] Childhood[edit] Orgone. Orgone energy accumulator. Martin Fleischmann. Martin Fleischmann FRS (29 March 1927 – 3 August 2012) was a British chemist noted for his work in electrochemistry.[3][4] Premature announcement of his cold fusion research with Stanley Pons,[5] regarding excess heat in heavy water, led to their names being identified with the frenzy, controversy, and backlash that followed, although they continued their interest and research in cold fusion.[6][citation needed] Early life[edit] Born in Karlovy Vary, Czechoslovakia, in 1927.[6] Since his father was of Jewish heritage, Fleischmann's family moved to the Netherlands and then to England in 1938, to avoid Nazi persecution.[6] He received a PhD from Imperial College London in 1950.[6] Career[edit] 1950s – 1983[edit] Cold fusion[edit] On 23 March 1989 it was finally announced at a press conference as "a sustained nuclear fusion reaction,"[16] which was quickly labeled by the press as cold fusion[17][18]– a result previously thought to be unattainable.

Clarke's three laws. Microbotics. Superfluid vacuum theory. Superfluid vacuum theory (SVT), sometimes known as the BEC vacuum theory, is an approach in theoretical physics and quantum mechanics where the fundamental physical vacuum (non-removable background) is viewed as superfluid or as a Bose–Einstein condensate (BEC). Society for Scientific Exploration. The Society for Scientific Exploration, or SSE, is a professional organization of scientists and other scholars committed to studying unusual and unexplained phenomena that cross traditional scientific boundaries and may be ignored or inadequately studied within mainstream science.[1] The opinions of the organization in regard to what are the proper limits of scientific exploration are often at odds with those of mainstream science.[2]

The Story of Louis Pasteur. Net energy gain. Classified information. Israel-lobbyen. Gallium nitride. Energy Catalyzer. The device was demonstrated to invited audiences several times in 2011, and commented on by various academics and others, but no independent tests have been made, and no peer-reviewed tests have been published. Mehran Tavakoli Keshe. Zero-energy universe. Tim Berners-Lee. QED vacuum. Luminiferous aether. Michelson–Morley experiment. Magic satchel. Thermodynamics. Plutocracy.