Newcastle: a 'living lab' to test driverless cars, parking sensors and lockout laws. When the entrepreneur Dr Gunilla Burrowes reaches for a metaphor to describe Newcastle, she comes up with “the Goldilocks city”. 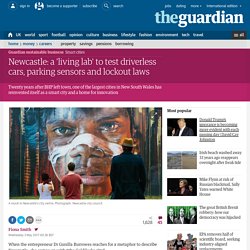 She means that like the middle bed in the fairytale, it is just the right size to be able to get things done. “That has really powerful implications for business,” she says. “We are small enough to get to know each other quite well personally and [care] about each other, but big enough to have a marketplace to have the services.” With a population of about 400,000, composition and geography, the New South Wales coastal city is an ideal candidate to be a “living lab” – a place where companies can trial their inventions to see how they perform in the real world. For this reason, Newcastle was picked to trial such innovations as the state government’s lockout laws for pubs, a new McDonald’s menu, and a parking sensor app. Smart Cities and Suburbs Program. The Smart Cities and Suburbs Program provides funding to support projects that apply innovative technology-based solutions to urban challenges to improve the liveability, productivity and sustainability of Australian cities, suburbs and towns. 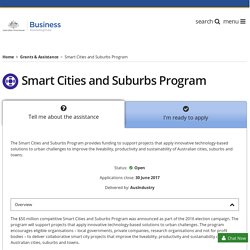 Overview The $50 million competitive Smart Cities and Suburbs Program was announced as part of the 2016 election campaign. The program will support projects that apply innovative technology-based solutions to urban challenges. The program encourages eligible organisations – local governments, private companies, research organisations and not for profit bodies – to deliver collaborative smart city projects that improve the liveability, productivity and sustainability of Australian cities, suburbs and towns. 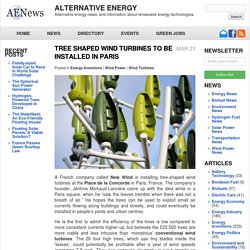 The company’s founder, Jérôme Michaud-Larivière came up with the idea while in a Paris square, when he “saw the leaves tremble when there was not a breath of air.” He hopes the trees can be used to exploit small air currents flowing along buildings and streets, and could eventually be installed in people’s yards and urban centres. He is the first to admit the efficiency of the trees is low compared to more consistent currents higher up, but believes the £23,500 trees are more viable and less intrusive than ‘monstrous’ conventional wind turbines. The 26 foot high trees, which use tiny blades inside the ‘leaves’, could potentially be profitable after a year of wind speeds averaging 7.8 mph. They can generate electricity in wind speeds as low as 4.5 mph. Photos Watch the video: Visit the New Wind R&D Website (French) What do you think? Beach wheelchair gives north Queensland locals a new lease on life. Updated Imagine wanting nothing more than the feeling of sand between your toes and warm water lapping at your legs, but being bound to the flat, concrete carpark. 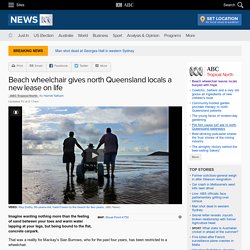 That was a reality for Mackay's Sian Burrows, who for the past four years, has been restricted to a wheelchair. "I was diagnosed with multiple sclerosis at the end of 2012, and by the beginning of 2014 it had affected my legs," she said. Konnectlearning.com. Day One: 25th October, 2016 8:30 Registration, morning coffee and tea 8:50 Welcome to Country Address 8:55 Opening remarks from chair Stephen Bali, Mayor, Blacktown City Council. 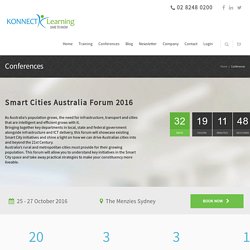 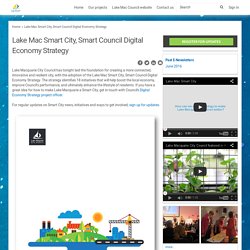 Council does not hold all the answers. It is up to all of us to work together to make the City an even better place. Urban Europe — statistics on cities, towns and suburbs — smart cities - Statistics Explained. Data extracted in February–April 2016. 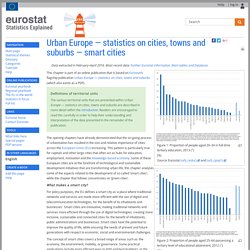 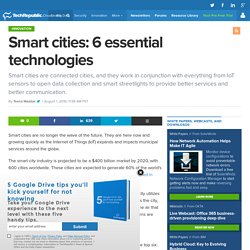 They are here now and growing quickly as the Internet of Things (IoT) expands and impacts municipal services around the globe. The smart city industry is projected to be a $400 billion market by 2020, with 600 cities worldwide. These cities are expected to generate 60% of the world's GDP by 2025, according to McKinsey research, as previously published in TechRepublic. While there are many definitions of a smart city, in general, a smart city utilizes IoT sensors, actuators and technology to connect components across the city, and it impacts every layer of a city, from underneath the streets, to the air that citizens are breathing. Data from all segments is analyzed, and patterns are derived from the collected data. 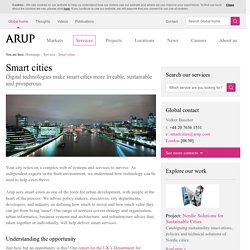 Your city relies on a complex web of systems and services to survive. As independent experts in the built environment, we understand how technology can be used to help cities thrive. Arup sees smart cities as one of the tools for urban development, with people at the heart of the process. We advise policy makers, executives, city departments, developers, and industry on defining how much to invest and how much value they can get from being 'smart'. 25 Technologies Every Smart City Should Have. You think cities are crowded now? 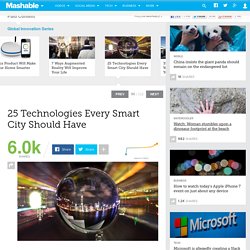 By 2030, more than 5 billion people will live in urban settings. But before we get to that kind of population density, we have to optimize our cities. We need to make them smarter and better; technology can help. Cities all around the world work with developers and contractors to make city living better, whether it's improving the timing of traffic lights or creating a useful app, which becomes more powerful as smartphone penetration continues to increase. Apps and well-implemented technology can help cash-strapped governments save money and, be more efficient. Open-data initiatives and hackathons, like New York City's BigApps competition, which produce useful and resource-saving apps to improve cities and keep citizens informed. All-digital and easy-to-use parking payment systems — think EZ-pass for parking. Widespread use of traffic rerouting apps, such as Greenway and Waze.

Does your city offer these technologies? Smart Cities - Connecting the Cities of the Future - Qualcomm. Ystop – Just another WordPress site.