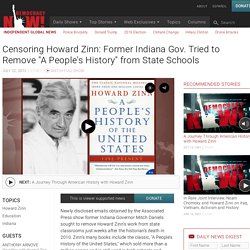 He attended public school in Indiana from 1972 to 1987. His family lives in Bloomington, Indiana, where Anthony was raised. Cornel West professor at Union Theological Seminary. This is viewer supported news Donate Newly disclosed emails obtained by the Associated Press show former Indiana Governor Mitch Daniels sought to remove Howard Zinn’s work from state classrooms just weeks after the historian’s death in 2010. This is a rush transcript. AMY GOODMAN: We turn now to a battle over the work of the late historian Howard Zinn, author of many books, including his classic, A People’s History of the United States. Howard Zinn died at the age of 87 on January 27, 2010. Former Governor Mitch Daniels, now head of Purdue, has defended his actions. Also still with us, Dr. Part 2: Tavis Smiley and Dr. Cornel West Call on Obama to Host a White House Conf. on Ending Poverty. Guests Tavis Smiley TV, radio broadcaster, philanthropist and New York Times bestselling author. 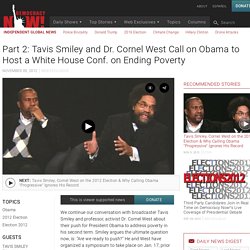 He hosts the TV show Tavis Smiley on PBS and two radio shows: The Tavis Smiley Show and Smiley & West, which he hosts with Cornel West. Together, they have written the new book, The Rich and the Rest of Us: A Poverty Manifesto. Cornel West professor of philosophy and Christian practice at Union Theological Seminary and professor emeritus at Princeton University. This is viewer supported news Donate We continue our conversation with broadcaster Tavis Smiley and professor, activist Dr. Click here to see part 1 of this interview. AMY GOODMAN: This is Democracy Now! And we’re talking about poverty. CORNEL WEST: Well, it’s sad. AMY GOODMAN: Thirty-four of 35. CORNEL WEST: Thirty-four of 35. AMY GOODMAN: How have we come to this point? Last Week Tonight with John Oliver: Public Defenders (HBO) Intellectual Takeout. Chris Hedges Answers Questions from Viewers.

The Real News Network - Independent News, Blogs and Editorials. Chomsky: Why support The Real News Network. 10 Fascinating Documentaries About the One Percent. THE TRUTH ABOUT POLITICAL NEWS. Truthdig: Drilling Beneath the Headlines. Videos - The Year in Crazy: 2014. Tags: new year, 2014, cartoon compilation, year in review, climate, guns, congress, keystone, isis, terrorism, rectal feeding, torture, cheney, crimea, ukraine, pu 2014 saw everything from a mooching rancher and his well-armed militia buddies fighting off the federal government to the killing of an unarmed black man sparking a nationwide conversation on race. 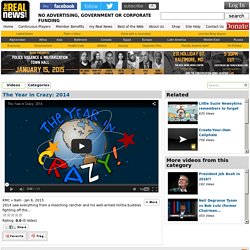 You can read more at Stay up-to-date with the latest animation! Follow me on Twitter: or on Facebook: And of course, there's an iPhone app! 2014 Year in Review: 7 Examples of Police State Technology Making Our Rights Obsolete. Things are not looking pretty for the land of the free. 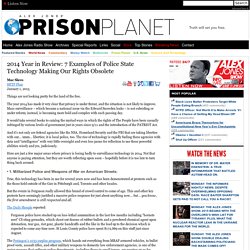 The year 2014 has made it very clear that privacy is under threat, and the situation is not likely to improve. Mass surveillance – which became a national issue via the Edward Snowden leaks – is not subsiding or under reform; instead, is becoming more bold and complex with each passing day. It would take several books to catalog the myriad ways in which the rights of The People have been casually infringed by various levels of government just in years since 9/11 and the introduction of the PATRIOT Act. And it’s not only are federal agencies like the NSA, Homeland Security and the FBI that are taking liberties with our… umm… liberties; it is local police, too. The rise of technology is rapidly fueling these agencies with data and “intelligence” with very little oversight and even less pause for reflection to use these powerful abilities wisely and yes, judiciously. • 1. The Daily Sheeple reported: • 2. . • 3. . • 4. . • 5. . • 6. WORLD NEWS. The Real News Network - Independent News, Blogs and Editorials.

Related:  PHILOSOPHY AND PSYCHOLOGY 3   -  i have questions and needs   -  peggyconolly   -  The Real News Network - Independent News, Blogs and Editorials   -  Truthdig: Drilling Beneath the Headlines   -  Education   -  Enterprise