The Epigrams of Martial 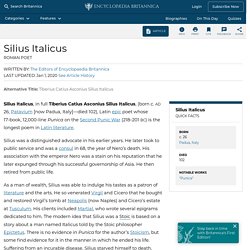 En.m.wikipedia. Due to an ambiguity in the Fasti Capitolini, experts such as Mommsen and Attilio Degrassi believed Silius' full name was Gaius Silius Aulus Caecina Largus. 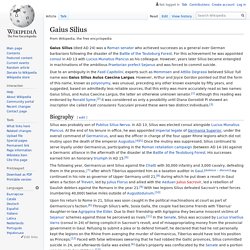 However, Arthur and Joyce Gordon pointed out that the form of this name, known as polyonymy, was unusual, preceding any other known example by fifty years, and suggested, based on admittedly less reliable sources, that this entry was more accurately read as two names: Gaius Silius, and Aulus Caecina Largus, the latter an otherwise unknown senator.[1] Although this reading was endorsed by Ronald Syme,[2] it was considered as only a possibility until Diana Gorostidi Pi showed an inscription she called Fasti consulares Tusculani proved these were two distinct individuals.[3] Biography[edit] The following year, Germanicus sent Silius against the Chatti with 30,000 infantry and 3,000 cavalry, defeating them in the process.,[7] after which Tiberius appointed him as a taxation auditor in Gaul.

Sources[edit] References[edit] En.m.wikipedia. Life[edit] Sources and birthplace[edit] The sources for the life of Silius Italicus are primarily Letter 3.7 of Pliny the Younger, which is a description of the poet's life written on the occasion of his suicide, some inscriptions,[2] and several epigrams by the poet Martial. 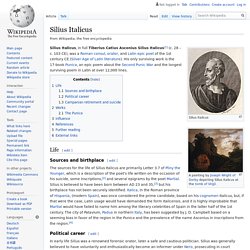 Silius is believed to have been born between AD 23 and 35,[3] but his birthplace has not been securely identified. Www.britannica. Plato.stanford. 1.

Life Sextus Empiricus was a Pyrrhonian Skeptic living probably in the second or third century CE, many of whose works survive, including the Outlines of Pyrrhonism, which is the best and fullest account we have of Pyrrhonian skepticism. (Book I of that work consists of Sextus’ codification of the nature of Pyrrhonian skepticism, which he contrasts with the outlooks of other schools of philosophy.) En.m.wikipedia. Sextus Empiricus (Greek: Σέξτος Ἐμπειρικός; c. 160 – c. 210 CE, dates uncertain), was a Pyrrhonist philosopher and a physician.

His philosophical works are the most complete surviving account of ancient Greek and Roman Pyrrhonism, and because of the arguments they contain against the other Hellenistic philosophies they are also a major source of information about those philosophies. En.m.wikipedia. Among those named Sextus are: See also[edit] References[edit] 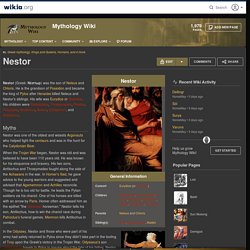 He is the grandson of Poseidon and became the king of Pylos after Heracles killed Neleus and Nestor's siblings. His wife was Eurydice or Anaxibia. His children were Peisistratus, Thrasymedes, Pisidice, Polycaste, Stratichus, Aretus, Echephron, and Antilochus. Myths Nestor was one of the oldest and wisests Argonauts who helped fight the centaurs and was in the hunt for the. Www.ancient-origins. Gaius Marius was easily one of the Roman Republic’s most accomplished men. 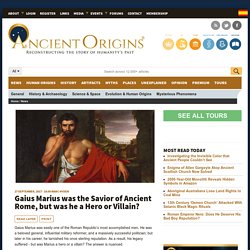 He was a beloved general, influential military reformer, and a massively successful politician; but later in his career, he tarnished his once sterling reputation. As a result, his legacy suffered - but was Marius a hero or a villain? The answer is nuanced. Marius was born in 157 BC to a family of supposed rustic origins. After he served honorably in Rome’s legions, he ascended the political ladder, fulfilling each post’s duty with distinction. So-called "Marius". Gaius Marius Steps in for Rome Rome was reeling from multiple defeats at the hands of a barbarian horde that was led by a mighty tribe called the Cimbri.

After preparing for a war of survival, Marius patiently waited for a couple years for the tribesmen to turn towards Rome, and in the meantime, he was continually re-elected to the consulship. ‘The Defeat of the Cimbri’ (1833) by Alexandre-Gabriel Decamps. ( Public Domain ) Was Marius a Hero or Villain? Www.ancient. Gaius Marius (c. 157-86 BCE) was an accomplished military commander and politician who was acclaimed for saving Rome from the brink of collapse. 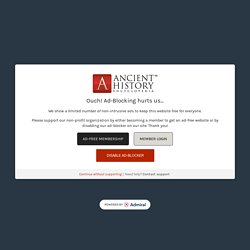 Yet, unfortunately, his name has only survived in relative obscurity because his achievements were eclipsed by his ultimate fall. Despite his copious misdeeds, he should also be remembered for his stunning political and military successes and the indelible imprint that he left on Rome. Early Life Around 157 BCE, Marius was born to a plebeian family in an Italian settlement called Ceraete, near Arpinum. None of Marius’ ancestors had ever been elected to a Roman political office, and he even claimed to have been raised in poverty, which meant that he was not seriously expected to become a person of importance. Www.britannica.

Gaius Marius, (born c. 157 bce, Cereatae, near Arpinum [Arpino], Latium [now in Italy]—died January 13, 86 bce, Rome), Roman general and politician, consul seven times (107, 104–100, 86 bce), who was the first Roman to illustrate the political support that a successful general could derive from the votes of his old army veterans. 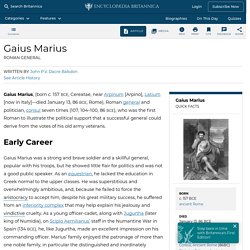 Early career Gaius Marius was a strong and brave soldier and a skillful general, popular with his troops, but he showed little flair for politics and was not a good public speaker. As an equestrian, he lacked the education in Greek normal to the upper classes. He was superstitious and overwhelmingly ambitious, and, because he failed to force the aristocracy to accept him, despite his great military success, he suffered from an inferiority complex that may help explain his jealousy and vindictive cruelty. Election to the consulship Get exclusive access to content from our 1768 First Edition with your subscription.

Early career Election to the consulship Early career. En.m.wikipedia. Roman general, statesman & military reformer Gaius Marius[a] (, Latin pronunciation: [ˈɡaː.ɪ.ʊs ˈmarɪ.ʊs]; 157 BC – January 13, 86 BC) was a Roman general and statesman. Victor of the Cimbric and Jugurthine wars, he held the office of consul an unprecedented seven times during his career. He was also noted for his important reforms of Roman armies. He was at the centre of a paradigmatic shift from the militia levies of the middle Republic to the professional soldiery of the late Republic; he also improved the pilum, a javelin (after improvement) designed to bend on impact, and large-scale changes to the logistical structure of the Roman army.[1] Www.livius.

252 Consul (with his son Volusianus); invasion by Visigoths and other tribes; Sasanian Persians attack Armenia and invade Mesopotamia253 Insurrections of Uranius Antoninus in Emesa and Aemilianus in Moesia; Trebonianus killed by his soldiers when he was marching against AemilianusDamnatio memoriae Contemporary events. Www.metmuseum. Fitz Gerald, C. M. 1905. "Accessions by Purchase, July-October: Bronze Statue of Trebonianus Gallus. " Www.britannica. En.m.wikipedia. Augustus Trebonianus Gallus (Latin: Gaius Vibius Afinius Trebonianus Gallus Augustus;[1][2] 206 – August 253), also known as Gallus, was Roman Emperor from June 251 to August 253, in a joint rule with his son Volusianus. Early life[edit] Timeline of ancient history. This timeline of ancient history lists historical events of the documented ancient past from the beginning of recorded history until the Early Middle Ages. Bronze Age and Early Iron Age[edit] The Bronze Age was the period in human cultural development when the most advanced metalworking (at least in systematic and widespread use) included techniques for smelting copper and tin from naturally-occurring outcroppings of copper ores, and then combining those ores to cast bronze.

These naturally-occurring ores typically included arsenic as a common impurity. Copper/tin ores are rare, as reflected in the fact that there were no tin bronzes in western Asia before 3000 BC. In some parts of the world, a Copper Age follows the Neolithic and precedes the Bronze Age. The Iron Age was the stage in the development of any people in which tools and weapons whose main ingredient was iron were prominent.