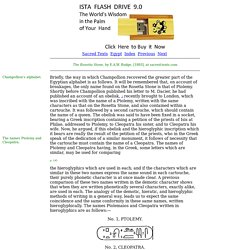 .history.com/ In July 1799, during Napoleon Bonaparte’s military invasion of Egypt, a group of French soldiers accidentally made a groundbreaking archaeological discovery. 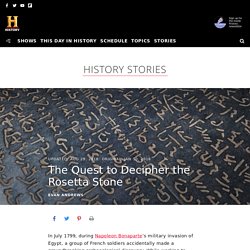 While working to strengthen the defenses of a sunbaked fort near the Nile Delta town of Rosetta (modern-day Rashid), they knocked down a wall and unearthed a 44-inch-long, 30-inch-wide chunk of black granodiorite. It wasn’t unusual for the French troops to stumble upon Egyptian relics, but this particular slab caught the attention of Pierre-Francois Bouchard, the engineer in charge. When, upon closer inspection, he noticed that it was covered in ancient text, he halted demolition and sent word to his superior officer. 993_champollion. One of the great pleasures in retracing the steps of a fundamental discovery, be it in science, or music, or art, is remaking the discovery for oneself, re-experiencing the process through which the scientist or artist grasped something profound, which hitherto had been utterly unknown. 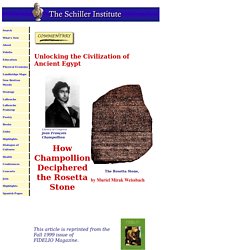 The joy of that moment, though but a pale reflection of what must have been the emotion of the original thinker, gives one a taste of what creativity really is all about. And the taste, what Nicolaus of Cusa called the “sweetness of Truth,” has the effect of whetting the appetite further, so that one yearns to find out what lies ahead on the path to knowledge. Reliving such discoveries makes lasting friendships. For, once one has traversed the same, at times tortuous, path found by the original thinker, one comes to know the personality of that mind, to respect it and love it. Not only did the British grab the Rosetta Stone through war, but they also controlled access to it.

En.m.wikipedia. The Rosetta Stone, discovered in 1799 by members of Napoleon Bonaparte's campaign in Egypt, bore a parallel text in hieroglyphic, demotic and Greek. 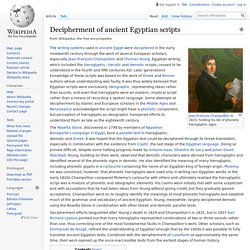 It was hoped that the Egyptian text could be deciphered through its Greek translation, especially in combination with the evidence from Coptic, the last stage of the Egyptian language. Doing so proved difficult, despite some halting progress made by Antoine-Isaac Silvestre de Sacy and Johan David Åkerblad. Www.wired. __1822: __Jean-François Champollion shows a draft translation of the mysterious Rosetta stone and demonstrates to the world how to read the voluminous hieroglyphics left behind by the scribes of ancient Egypt. 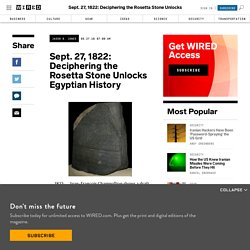 The story of the Rosetta stone is one of coruscating intellects and petty rivalries, of ancient mysteries and quite modern imperial politics. The stone dates to 196 B.C., and was recovered in 1799 by a French soldier in Rosetta, aka Rashid, a port on Egypt's Mediterranean coast. En.m.wikipedia. French classical scholar Champollion lived in a period of political turmoil in France which continuously threatened to disrupt his research in various ways. 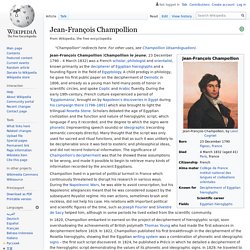 During the Napoleonic Wars, he was able to avoid conscription, but his Napoleonic allegiances meant that he was considered suspect by the subsequent Royalist regime. His own actions, sometimes brash and reckless, did not help his case. His relations with important political and scientific figures of the time, such as Joseph Fourier and Silvestre de Sacy helped him, although in some periods he lived exiled from the scientific community. During his life as well as long after his death intense discussions over the merits of his decipherment were carried out among Egyptologists. 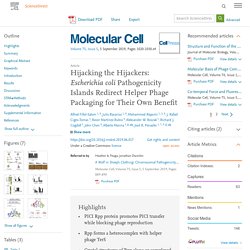 Hijacking Genes: An Evolution Revolution? - Oxbridge Applications. New research is questioning our understanding of how genetic information is passed on. 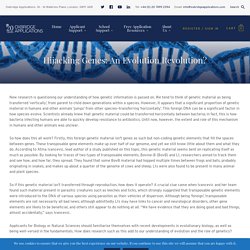 We tend to think of genetic material as being transferred ‘vertically’, from parent to child down generations within a species. However, it appears that a significant proportion of genetic material in humans and other animals ‘jumps’ from other species—transferring ‘horizontally’. This foreign DNA can be a significant factor in how species evolve. Scientists already knew that genetic material could be transferred horizontally between bacteria; in fact, this is how bacteria infecting humans are able to quickly develop resistance to antibiotics.

The Evolutionary Hijack - By Meaning Ring on 2015/03/18 We generally have a misconception about the inventive and creative powers of the human mind. 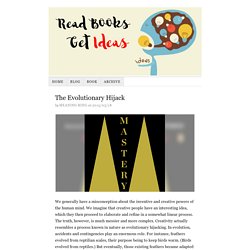 We imagine that creative people have an interesting idea, which they then proceed to elaborate and refine in a somewhat linear process. The truth, however, is much messier and more complex. Creativity actually resembles a process known in nature as evolutionary hijacking. In evolution, accidents and contingencies play an enormous role. Human creativity generally follows a similar path, perhaps indicating a kind of organic fatality to the creation of anything. Marlene Dietrich. German-American actress and singer Marie Magdalene "Marlene" Dietrich (, German: [maʁˈleːnə ˈdiːtʁɪç]; 27 December 1901 – 6 May 1992)[1] was a German-American[2][3][4] actress and singer. 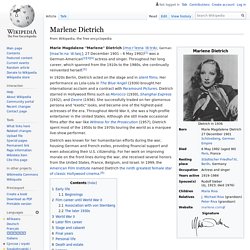 Throughout her long career, which spanned from the 1910s to the 1980s, she continually reinvented herself.[5] Dietrich was known for her humanitarian efforts during the war, housing German and French exiles, providing financial support and even advocating their U.S. citizenship. Translation. Count de montesquiou proust - Recherche Google. August strindberg playwright mastery youtube - Recherche Google. Negro spirituals - Recherche Google.