Holy Land Essential Oil Grown and Distilled in Israel - Aytz Chayim. When you use Israeli oils that are distilled, produced, or grown in Israel you are allowing the essence of the Land of Israel the Holy Land to be taken into your body. 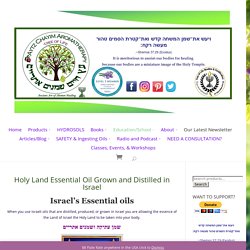 Brain/TBI. 13 Articles of the Jewish Faith. Judaism has no official creed, but the great 12th-century rabbi Maimonides put together "13 Articles of Faith" that he believed every Jew ought to adhere to, and this is often used as a summary of core Jewish beliefs. 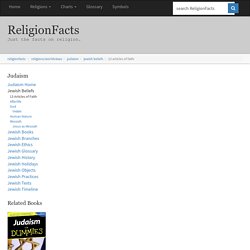 The Jewish faith doesn't have an official creed. Jewish beliefs are articulated and observed by followers of the faith through the reading of the sacred texts of Judaism, like the Torah. However, the great 12th-century Rabbi Maimonides put together "13 Articles of Faith" that he believed every Jew ought to believe.

These beliefs have been widely accepted as a proper expression of the Jewish faith and they still appear in Jewish prayer books today. So while it is not necessary to believe all of these articles to be Jewish - and in fact many Jews would likely question one or more of the articles - they serve as a good general summary of religious Judaism. Safra det'zeniuta. Growing weed - a simple guide from the team at Types of weed @ Types of weed, the World's best medical Marijuana site. “Growing Marijuana, The Team at Types of Weed strongly recommend you talk to your local authority to determine if Growing Marijuana is legal in your Country or State” The First and integral part of getting your marijuana plants off to a great start is germinating your seeds properly. 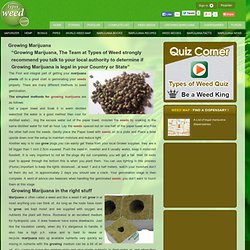 There are many different methods to seed germination. The simplest methods for growing marijuana are as follows: Get a paper towel and Soak it in warm distilled water(boil the water is a good method then cool for distilled water) , ring the excess water out of the paper towel, moisten the seeds by soaking in the same distilled water for half an hour. Lay the seeds spaced out on one half of the paper towel and Fold the other half over the seeds. Another way is to use grow plugs,you can easily get these from your local Grower supplies, they are a bit bigger than 1 inch 2.5cm squared.

OT: 'Highless' Marijuana. Thought this would interest some of you.... 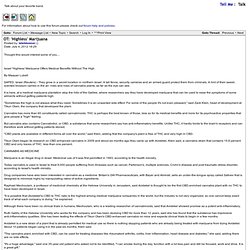 Israel 'Highless' Marijuana Offers Medical Benefits Without The High By Maayan Lubell SAFED, Israel (Reuters) - They grow in a secret location in northern Israel. A tall fence, security cameras and an armed guard protect them from criminals. Holy Annointing Oil ~ From The Bible. Link to this Article. 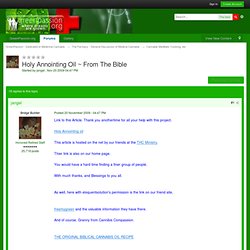 Thank you anothertime for all your help with this project. Holy Annointing oil This article is hosted on the net by our friends at the THC Ministry. Thier link is also on our home page. You would have a hard time finding a finer group of people. Myrrh, Commiphora myrrha Essential Oil - Pure Premium Therapeutic Essential Oils. Description: Though classified as shrubs, Myrrh can grow up to 10 Meters in height. 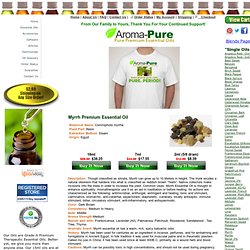 The trunk exudes a natural oleoresin that hardens into what is classified as reddish brown “Tears”. Native collectors make incisions into the trees in order to increase the yield. Common Uses: Myrrh Essential Oil is thought to enhance spirituality. "Buy Pure Essential Oils Wholesale. Premium essential oils cassia (cinnamon leaf) Natures Sunshine Products. Premium essential oils cinnamon oil. Cannabis Roots: The Hidden History of Marijuana - Dr. Carl Ruck. Were Europe's great rabbis a bunch of potheads? NEW YORK (JTA) — After graduating from a Modern Orthodox high school in New York, 30-year-old author Yoseph Needelman moved to Jerusalem to explore the use of marijuana in Jewish tradition. For eight years he bounced between religious institutions, interviewing spiritual leaders to find out whether there was indeed a place for drugs in the Jewish world.

Consecration and Shaktipat « cannablog. The Great Keneh Bosem Debate - Part 1. Recently, while roaming the net, I came across some criticisms regarding the various theories identifying references to cannabis in the Bible, such as the etymological research of Sula Benet. I will be answering the questions raised by these criticisms in this three-part article "The Great Keneh Bosem Debate", which will break the elements down into the Old and New Testament accounts. In the first part, I will focus on the claims of Tim at www.truthsaves.org and his article disputing the research of Sula Benet, Does the Bible talk about Marijuana?.

Although Tim claims to be on a quest for the truth, it seems at www.truthsaves.org, the truth is the first victim of foul play in this debate. I tried to post well written responses to Tim’s article on his site, but these were held up for days with the comment, “Your comment is awaiting moderation”, and then later deleted. Tim posted one small comment I made and wrote back “If you’ve written an article you want to link to, that is fine. Part 2 of the Great Keneh Bosem Debate: In Part 1 of The Great Keneh Bosem Debate, we discussed a critical essay at the Christian website www.truthsaves.org, “Does the Bible talk about Marijuana?” , which raised some questions about the correctness of the research of the Polish anthropologist Sula Benet regarding the identity of the Hebrew term Keneh bosem with cannabis. As www.truthsaves.org has limited my responses on their site in regards to these criticism, although it claims to be “open for comment” deleting and not posting a number of entries, I have posted my responses here in my own blog, in a 3 part series.

So if you are joining now, you should go back and read part 1 to get a better understanding. Jewish Reggae CDs. With the popularity of Matisyahu, a Hasidic reggae rapper, interest is growing in other Jewish Reggae music. 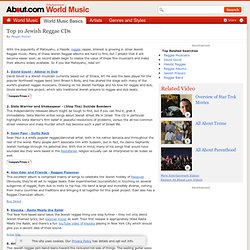 Many of these Jewish Reggae albums are hard to find, but I predict that it will become easier soon, as record labels begin to realize the value of these fine musicians and make their albums widely available. So if you like Matisyahu, read on! 1. David Gould - Adonai in Dub David Gould is a Jewish musician currently based out of Ithaca, NY. 2. This independently-released album might be tough to find, but if you can find it, grab it immediately. Vihoo Vihoo - David Gould (jewish reggae hebrew dub) Hyper-machmir Green Leaf Party warns that the reefers are kitniyot. By Mobius [➚] · Tuesday, March 27th, 2007 Oh, I thought it said “You shall have no products made from weed within your borders…” JPost reports: Every Sunday school student knows Pessah for its ban on food that rises, but a growing number of Jews are asking whether the holiday also precludes them from getting high.Hemp has increasingly been spotted on the list of kitniyot, or legumes, that Ashkenazi Jews abstain from eating during Pessah, according to several influential rabbinical Web sites, including kashrut.com.

But not everyone agrees that hemp qualifies for the ban, and the debate has led many to question the definition of kitniyot.While hemp isn’t a kitchen staple for most people, hemp oil can be found in a number of hygiene products and in some alternative baked goods. But it’s hemp’s more notorious cousin, commonly known as marijuana, that has set the sparks flying. Frankly, I share Ale Yarok’s desire to appeal to the religious Jewish community to reform unjust drug laws. Consecration and Shaktipat « cannablog. David gould - divine order. David Gould - Four Question. ‫נעלה לציון - שיבת ציון בהופעה 2010 shivat zion band‬‎ Traditional Jewish music - Emil Zrihan - Chants. Zion - the official clip. Bluekilla - Hawa Nagila (Hava Nagila Ska Cover)