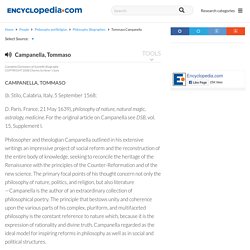 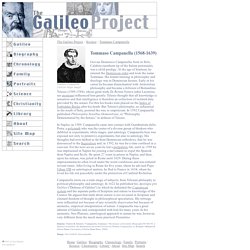 At the age of fourteen, he entered the Dominican order and took the name Tommaso. His formal training in philosophy and theology was in Dominican houses. Early in his career he became disenchanted with Aristotelian philosophy and became a follower of Bernardino Telesio (1509-1588), whose great work De Rerum Natura (after Lucretius, see atomism) influenced him greatly. Telesio thought that all knowledge is sensation and that intelligence is therefore an collection of isolated data provided by the senses. Italian philosopher and poet. Tommaso Campanella. Tommaso Campanella's house at Stilo Tommaso Campanella OP (Italian: [tomˈmazo kampaˈnɛlla]; 5 September 1568 – 21 May 1639), baptized Giovanni Domenico Campanella, was an Italian philosopher, theologian, astrologer, and poet. 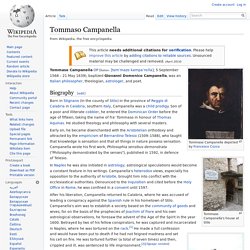 Biography[edit] Tommaso Campanella. French philosopher. Henri Bergson, in full Henri-Louis Bergson, (born Oct. 18, 1859, Paris, France—died Jan. 4, 1941, Paris), French philosopher, the first to elaborate what came to be called a process philosophy, which rejected static values in favour of values of motion, change, and evolution. He was also a master literary stylist, of both academic and popular appeal, and was awarded the Nobel Prize for Literature in 1927. Early years. Matter and Memory. Matter and Memory (French: Matière et mémoire, 1896) is a book by the French philosopher Henri Bergson. 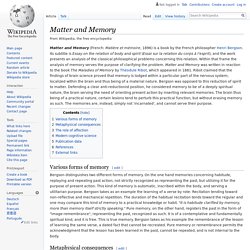 Its subtitle is Essay on the relation of body and spirit (Essai sur la relation du corps à l’esprit), and the work presents an analysis of the classical philosophical problems concerning this relation. Bergson's non-archival theory of memory - James Burton, 2008. Duration. Einstein bergson debate youtube. Definition of Prima Facie by Merriam-Webster. Legal Dictionary. Prima facie. Burden of proof[edit] For example, in a trial under criminal law the prosecution has the burden of presenting prima facie evidence of each element of the crime charged against the defendant. 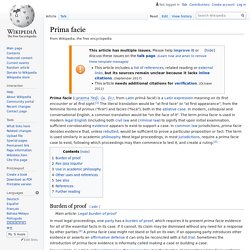 In a murder case, this would include evidence that the victim was in fact dead, that the defendant's act caused the death, and that the defendant acted with malice aforethought. If no party introduces new evidence, the case stands or falls just by the prima facie evidence or lack thereof, respectively. Prima facie evidence does not need to be conclusive or irrefutable: at this stage, evidence rebutting the case is not considered, only whether any party's case has enough merit to take it to a full trial.

In common law jurisdictions such as the United Kingdom and the United States, the prosecution in a criminal trial must disclose all evidence to the defense. An aim of the doctrine of prima facie is to prevent litigants from bringing spurious charges which simply waste all other parties' time. Greek Philosophy 6: The Eleatic School – Parmenides, Zeno & Melissus. For this lecture, please read this entry on Parmenides, and this entry on Zeno. 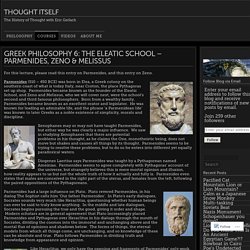 Parmenides (510 – 450 BCE) was born in Elea, a Greek colony on the southern coast of what is today Italy, near Croton, the place Pythagoras set up shop. Parmenides became known as the founder of the Eleatic School, and Zeno and Melissus, who we will cover next, were the school’s second and third famous philosophers. Born from a wealthy family, Parmenides became known as an excellent orator and legislator. He was known for leading an admirable life, and the phrase ‘a Parmenidean life’ was known to later Greeks as a noble existence of simplicity, morals and discipline. Xenophanes may or may not have taught Parmenides, but either way he was clearly a major influence. Diogenes Laertius says Parmenides was taught by a Pythagorean named Ameinias. Parmenides had a large influence on Plato. The word ‘apocalypse’ comes from ancient Greek for ‘revealing’. Eleatic school - Oxford Classical Dictionary.

*Parmenides, *Zeno (1) of Elea and *Melissus of Samos, who are considered to form a group within *Presocratic Philosophy because of the similarity of their doctrines. 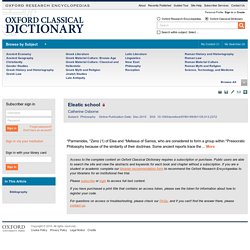 Eleaticism. Eleaticism, one of the principal schools of ancient pre-Socratic philosophy, so called from its seat in the Greek colony of Elea (or Velia) in southern Italy. This school, which flourished in the 5th century bce, was distinguished by its radical monism—i.e., its doctrine of the One, according to which all that exists (or is really true) is a static plenum of Being as such, and nothing exists that stands either in contrast or in contradiction to Being. Thus, all differentiation, motion, and change must be illusory. This monism is also reflected in its view that existence, thought, and expression coalesce into one. Eleatics. The Eleatics were a pre-Socratic school of philosophy founded by Parmenides in the early fifth century BC in the ancient town of Elea. 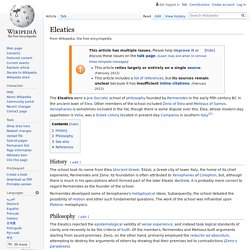 Other members of the school included Zeno of Elea and Melissus of Samos. Xenophanes is sometimes included in the list, though there is some dispute over this. Eleatic School - By Movement / School - The Basics of Philosophy. The Eleatic School is an early Pre-Socratic school of philosophy founded by Parmenides in the 5th Century B.C. at Elea, a Greek colony in southern Italy. 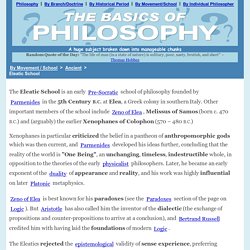 Other important members of the school include Zeno of Elea, Melissus of Samos (born c. 470 B.C.) and (arguably) the earlier Xenophanes of Colophon (570 – 480 B.C.) Science Explained: The Physics of Perpetual Motion Machines. What is Perpetual Motion? 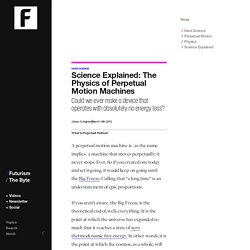 A perpetual motion machine is (as the name implies) a machine that moves perpetually; it never stops. Ever. So if you created one today and set it going, it would keep on going until the Big Freeze. Calling that “a long time” is an understatement of epic proportions. Tutorial: Light Speed Cinemagraph - Art of Visuals. Static and dynamic metaphysics of free will: A pragmatic perspective. By Eric Racine, PhD and Victoria Saigle Dr. Eric Racine is the director of the Neuroethics Research Unit at the Institut de recherches cliniques de Montréal and holds academic appointments in the Department of Medicine and the Department of Social and Preventive Medicine at Université de Montréal and in the Department of Neurology and Neurosurgery, the Department of Medicine, and the Biomedical Ethics Unit at McGill University.

He is also a member of the AJOB Neuroscience Editorial Board. Victoria Saigle is a research assistant at the Neuroethics Research Unit at the Institut de recherches cliniques de Montréal. Dynamic Semantics. 1. Interpretation as a Process Interpretation of declarative sentences can be viewed as a product or as a process. In the product perspective, one focuses on the notion of truth in a given situation. In the process perspective, interpretation of a proposition is viewed as an information updating step that allows us to replace a given state of knowledge by a new, more accurate knowledge state. Dynamic semantics focuses on interpretation as a process. 1.1 Update Semantics Update semantics is a particular way in which the interpretation-as-process idea can be implemented. 1.2 Propositional Logic as an Update Logic Sets of possibilities represent states of knowledge.

Atomic statements. Why Philosophy Needs a Dynamic Encyclopedia of Philosophy. [This piece was authored by John Perry and Edward N. Zalta in November 1997.] Sections Introduction. Static interpretation of time. Zeno's Arrow Paradox and an Infinite Series. The Greek philosopher Zeno of Elea (ca. 490–430 BCE) is generally believed to have devised a group of paradoxes pertaining to motion over a finite distance during a finite interval of time. Zeno and the Paradox of Motion. Again the total path is finite, but has no end, i.e., no final direction, and a ray propagating along this path can neither continue nor escape.

Bergson’s Challenge: Theorizing a "Non-Cinematographic" Cinema. Cinema 1: The Movement Image. Cinema 1: The Movement Image (French: Cinéma 1. L'Image-Mouvement) is a 1983 book by the philosopher Gilles Deleuze, in which the author combines philosophy with film criticism. Philosophy of Film: Continental Perspectives. This article introduces the most important perspectives on film (movies) from the continental philosophical perspective. Time, Bergson, and the Cinematographical Mechanism – Offscreen.