Www.philosophyforlife. Speakingofjung. Excerpt from the book, Puer Aeternus: A Psychological Study of the Adult Struggle with the Paradise of Childhood, by Jungian analyst Marie-Louise von Franz, Ph.D. 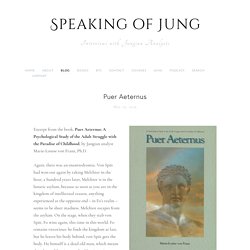 Again, there was an enantiodromia. Von Spät had won out again by taking Melchior in the boat; a hundred years later, Melchior is in the lunatic asylum, because as soon as you are in the kingdom of intellectual reason, anything experienced at the opposite end – in Fo’s realm – seems to be sheer madness. Melchior escapes from the asylum. On the stage, when they stab von Spät, Fo wins again, this time in this world. Fo remains victorious: he finds the kingdom at last, but he leaves his body behind; von Spät gets the body. In his life and art, Bruno Goetz himself has gone beyond this unsolved problem. Frithluton. Puer aeternus. 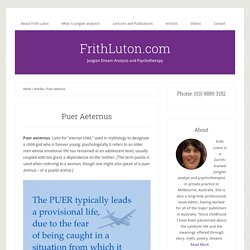 Latin for “eternal child,” used in mythology to designate a child-god who is forever young; psychologically it refers to an older man whose emotional life has remained at an adolescent level, usually coupled with too great a dependence on the mother. En.m.wikipedia. Puer aeternus (Latin for 'eternal boy'; female: puella aeterna; sometimes shortened to puer and puella) in mythology is a child-god who is forever young. 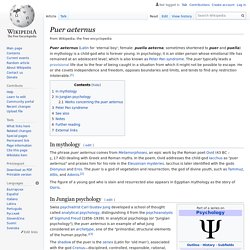 In psychology, it is an older person whose emotional life has remained at an adolescent level, which is also known as Peter Pan syndrome. The puer typically leads a provisional life due to the fear of being caught in a situation from which it might not be possible to escape. He or she covets independence and freedom, opposes boundaries and limits, and tends to find any restriction intolerable.[1] Www.lexico. En.m.wiktionary. English[edit] Etymology[edit] From Latin senex. 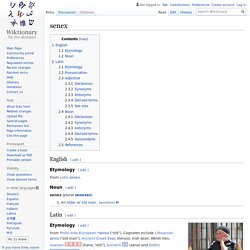 Noun[edit] Www.senexco. En.m.wikipedia. A wise old man: "Philosopher in Meditation" by Rembrandt Traits[edit] This type of character is typically represented as a kind and wise, older father-type figure who uses personal knowledge of people and the world to help tell stories and offer guidance that, in a mystical way, may impress upon his audience a sense of who they are and who they might become, thereby acting as a mentor. 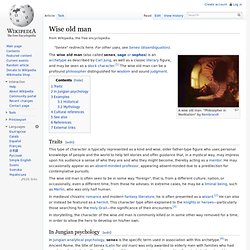 He may occasionally appear as an absent-minded professor, appearing absent-minded due to a predilection for contemplative pursuits. The wise old man is often seen to be in some way "foreign", that is, from a different culture, nation, or occasionally, even a different time, from those he advises. Redirect Notice. En.m.wikipedia. Jungcurrents. Loki The Trickster is… 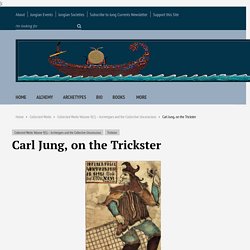 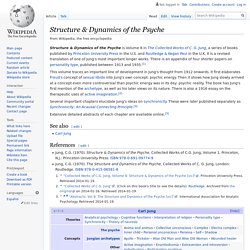 G. Jung, a series of books published by Princeton University Press in the U.S. and Routledge & Kegan Paul in the U.K. It is a revised translation of one of Jung's most important longer works. There is an appendix of four shorter papers on personality type, published between 1913 and 1935.[1] Logos. Logos (UK /ˈloʊɡɒs/, /ˈlɒɡɒs/, or US /ˈloʊɡoʊs/; Greek: λόγος, from λέγω lego "I say") is an important term in philosophy, psychology, rhetoric, and religion.

Originally a word meaning "a ground", "a plea", "an opinion", "an expectation", "word", "speech", "account", "to reason"[1][2] it became a technical term in philosophy, beginning with Heraclitus (ca. 535–475 BC), who used the term for a principle of order and knowledge.[3] Ancient philosophers used the term in different ways. The sophists used the term to mean discourse, and Aristotle applied the term to refer to "reasoned discourse"[4] or "the argument" in the field of rhetoric.[5] The Stoic philosophers identified the term with the divine animating principle pervading the Universe.

Under Hellenistic Judaism, Philo (c. 20 BC – AD 50) adopted the term into Jewish philosophy.[6] The Gospel of John identifies the Logos, through which all things are made, as divine (theos),[7] and further identifies Jesus as the incarnate Logos. Examples-of-ethos-logos-and-pathos. Aristotle's "modes for persuasion" - otherwise known as rhetorical appeals - are known by the names of ethos, pathos, and logos.

They are means of persuading others to believe a particular point of view. They are often used in speech writing and advertising to sway the audience. Meaning of Ethos, Logos, and Pathos Aristotle used these three terms to explain how rhetoric works: Heinrich Himmler. High Nazi Germany official, head of the SS Heinrich Luitpold Himmler (German: [ˈhaɪnʁɪç ˈluːɪtˌpɔlt ˈhɪmlɐ] ( listen); 7 October 1900 – 23 May 1945) was Reichsführer of the Schutzstaffel (Protection Squadron; SS), and a leading member of the Nazi Party (NSDAP) of Germany. 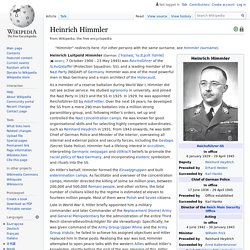 Himmler was one of the most powerful men in Nazi Germany and a main architect of the Holocaust. As a member of a reserve battalion during World War I, Himmler did not see active service. He studied agronomy in university, and joined the Nazi Party in 1923 and the SS in 1925. On Hitler's behalf, Himmler formed the Einsatzgruppen and built extermination camps. Early life. Adolf Eichmann. German Nazi official, a major organiser of the Holocaust Otto Adolf Eichmann[a] ( YKHE-mən,[1] German: [ˈʔɔto ˈʔaːdɔlf ˈʔaɪçman]; 19 March 1906 – 1 June 1962) was a German-Austrian SS-Obersturmbannführer and one of the major organizers of the Holocaust, referred to as the "Final Solution to the Jewish Question" in Nazi terminology.

He was tasked by SS-Obergruppenführer Reinhard Heydrich with facilitating and managing the logistics involved in the mass deportation of Jews to ghettos and extermination camps in Nazi-occupied Eastern Europe during World War II. Eichmann was captured by the Mossad in Argentina on 11 May 1960 and subsequently found guilty of war crimes in a widely publicised trial in Jerusalem, where he was executed by hanging in 1962. After an unremarkable school career, Eichmann briefly worked for his father's mining company in Austria, where the family had moved in 1914. Early life and education[edit] Early career[edit] Second World War[edit] Joseph Banks Rhine. Early life and education[edit] Joseph Banks Rhine was the second child of five children born to Samuel Ellis Rhine and Elizabeth Vaughan Rhine in Waterloo, Juniata County, Pennsylvania. Samuel Rhine had been educated in a Harrisburg business college, had taught school and later been a farmer and merchant.

The family moved to Marshallville, Ohio, when Joseph was in his early teens.[1] Joseph Banks Rhine. Carl Jung and the Psychology of the Man-Child.