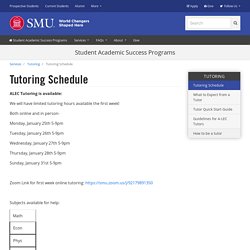 Both online and in person- Monday, January 25th 5-9pm. How to Solve Limits with a Calculator. You can solve most limit problems by using your calculator. 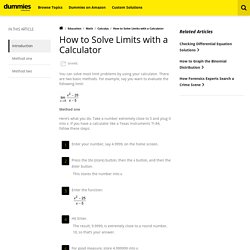 There are two basic methods. For example, say you want to evaluate the following limit: Method one Here’s what you do. Take a number extremely close to 5 and plug it into x. Enter your number, say 4.9999, on the home screen.Press the Sto (store) button, then the x button, and then the Enter button.This stores the number into x.Enter the function: Hit Enter.The result, 9.9999, is extremely close to a round number, 10, so that’s your answer.For good measure, store 4.999999 into x.Follow the procedure in Step 2.Scroll back up to the function by hitting 2nd, Enter, 2nd, Enter.Hit Enter one more time.You get 9.999999 — even closer to 10.

By the way, if you’re using a different calculator model, you can likely achieve the same result with the same technique or something very close to it. Method two The second calculator method is to produce a table of values: These calculator techniques are useful for a number of reasons: Web Login Service - Stale Request. AT&T Archives: The UNIX System: Making Computers More Productive. In the late 1960s, Bell Laboratories computer scientists Dennis Ritchie and Ken Thompson started work on a project that was inspired by an operating system called Multics, a joint project of MIT, GE, and Bell Labs. 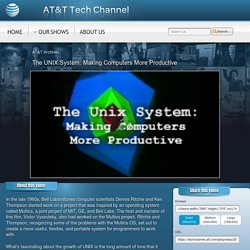 The host and narrator of this film, Victor Vyssotsky, also had worked on the Multics project. Ritchie and Thompson, recognizing some of the problems with the Multics OS, set out to create a more useful, flexible, and portable system for programmers to work with. What's fascinating about the growth of UNIX is the long amount of time that it was given to develop, almost organically, based on the needs of the users and programmers. The first installation of the program was done as late as 1972 (on a NY Telephone branch computer). It was in conjunction with the refinement of the C programming language, principally designed by Dennis Ritchie. Originally, UNIX was made available under license to universities and the government.

Dennis Ritchie. American computer scientist Personal life and career[edit] In 1967, Ritchie began working at the Bell Labs Computing Sciences Research Center, and in 1968, he defended his PhD thesis on "Program Structure and Computational Complexity" at Harvard under the supervision of Patrick C. 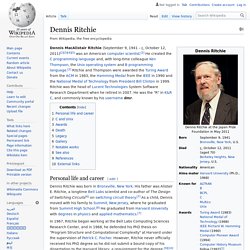 Fischer. However, Ritchie never officially received his PhD degree as he did not submit a bound copy of his dissertation to the Harvard library, a requirement for the degree.[9][10] In 2020, the Computer History museum worked with Ritchie's family and Fischer's family and found a copy of the lost dissertation.[10] As part of an AT&T restructuring in the mid-1990s, Ritchie was transferred to Lucent Technologies, where he retired in 2007 as head of System Software Research Department.[14] C and Unix[edit] Ritchie liked to emphasize that he was just one member of a group.

I think the Linux phenomenon is quite delightful, because it draws so strongly on the basis that Unix provided. Awards[edit] Death[edit] Legacy[edit] Brian Kernighan. Brian Wilson Kernighan (;[6] born January 1, 1942)[1] is a Canadian computer scientist. 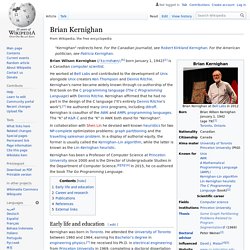 In collaboration with Shen Lin he devised well-known heuristics for two NP-complete optimization problems: graph partitioning and the travelling salesman problem. In a display of authorial equity, the former is usually called the Kernighan–Lin algorithm, while the latter is known as the Lin–Kernighan heuristic. Kernighan has been a Professor of Computer Science at Princeton University since 2000 and is the Director of Undergraduate Studies in the Department of Computer Science.[8][9][10] In 2015, he co-authored the book The Go Programming Language. Early life and education[edit] Kernighan was born in Toronto. Career and research[edit] Brian Kernighan and Dennis Ritchie at AT&T Bell Labs.