I Slept Outside for a Week and It Changed My Life (Really) Photo: Christopher D. 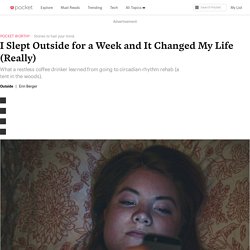 Thompson I live in explicit defiance of the rules of good sleep hygiene. Rule one: Don’t expose yourself to the blue light that’s emitted from phones and computers before bed. (When else am I going to catch up on the day’s hot takes?) Rule two: Sleep in a darkened bedroom. Since middle school over a decade ago, my terrible sleeping habits have manifested in various literal failures to launch: waking up for an early-morning run is a laughable concept.

Is Your Sleep Cycle Out of Sync? It May Be Genetic. Chances are, too, there are far more extreme larks than come to professional attention. 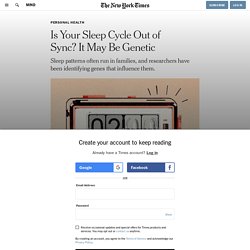 The team pointed out that people with advanced sleep phase rarely consult sleep doctors or are studied in sleep clinics because most of those affected seem to like the pattern, perhaps because it fits well into the rhythm of their lives or they have selected or created a rhythm that fits into their sleep-wake needs. The incidence of advanced sleep phase disorder is likely underestimated because it results in fewer social conflicts. You’re Not Getting Enough Sleep—and It’s Killing You. It's time to celebrate the humanity of the communal snooze. A few months ago, two Americans arrived for a meeting at a sprawling, corporate campus in Sichuan Province in China. 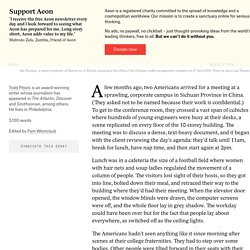 (They asked not to be named because their work is confidential.) To get to the conference room, they crossed a vast span of cubicles where hundreds of young engineers were busy at their desks, a scene replicated on every floor of the 10-storey building. The meeting was to discuss a dense, text-heavy document, and it began with the client reviewing the day’s agenda: they’d talk until 11am, break for lunch, have nap time, and then start again at 2pm. Lunch was in a cafeteria the size of a football field where women with hair nets and soup ladles regulated the movement of a column of people. The visitors lost sight of their hosts, so they got into line, bolted down their meal, and retraced their way to the building where they’d had their meeting. The Americans hadn’t seen anything like it since morning-after scenes at their college fraternities. Relax, Turn Off Your Phone, and Go to Sleep - Harvard Business Review - Pocket. What Are Dreams? Here Are the Predominant Theories.

Read: What people around the world dream about For all the commonalities dreams exhibit, they vary across time—people who grew up watching black-and-white TV are more likely to dream in black and white [10]—and culture. 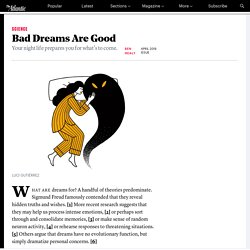 A 1958 study determined that compared with Japanese people, Americans dreamed more about being locked up, losing a loved one, finding money, being inappropriately dressed or nude, or encountering an insane person. Japanese people were more likely to dream about school, trying repeatedly to do something, being paralyzed with fear, or “wild, violent beasts.” [11] (For their part, beasts almost certainly have nightmares too: Just about all mammals are thought to dream, as are birds, some lizards, and—unique among invertebrates—cuttlefish. [12] The dreamiest member of the animal kingdom is the platypus, which logs up to eight hours of REM sleep a day. [13]) If human dreams sound bleak, bear in mind that even negative ones can have positive effects.

The Studies [6] G. Why It Hurts to Lose Sleep. Falling for Sleep - aeon - Pocket. In Evelyn De Morgan’s numinous painting, Night and Sleep (1878), Nyx, the mighty Greek goddess of night, hovers across a dusky sky with her beloved son Hypnos, the sweet-natured god of sleep. 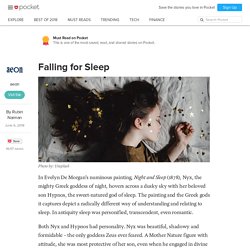 The Genius of Insomnia. Relax, Turn Off Your Phone, and Go to Sleep - Harvard Business Review - Pocket. If you’re just not a morning person, science says you may never be - Vox - Pocket. Photo by: MattysFlicks / Flickr If Cassidy Sokolis ever needs to wake up before 11 am, she scatters three alarm clocks throughout her bedroom. 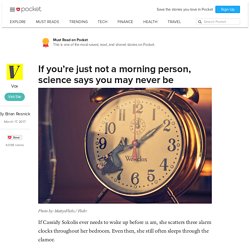 Too much sleep is just as bad for your brain as too little, concludes world’s largest sleep study. Why We Sleep, and Why We Often Can’t. Contemporary sleep evangelizers worry a good deal about our social attitudes toward sleep. 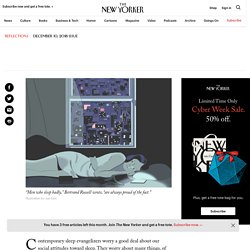 They worry about many things, of course—incandescent light, L.E.D. light, nicotine, caffeine, central heating, alcohol, the addictive folderol of personal technology—but social attitudes seem to exercise them the most. Deep down, they say, we simply do not respect the human need for repose. We remain convinced, in contradiction of all the available evidence, that stinting on sleep makes us heroic and industrious, rather than stupid and fat.

Can’t sleep? Perhaps you’re overtired. Nerina Ramlakhan remembers when her daughter was a toddler, and how if she got too tired she would be unable to switch off. 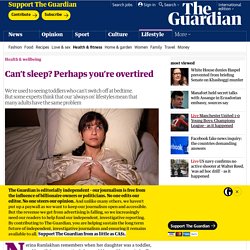 “There was a healthy level of tiredness,” she says. “But if she went beyond that, she would be running on a kind of false energy. And then she wouldn’t be able to switch off when she went to bed.” Overtiredness is recognised the world over in young children – but it is seemingly more and more common in adults. Dr Ramlakhan should know: she is a sleep psychologist and is increasingly seeing people who remind her of her little girl when she was younger. Brain Scans Reveal Why It Takes So Long to Wake Up in the Morning. Every morning, people sleepily drag themselves out of bed, wandering through a brain fog that seems to take forever to dissipate. 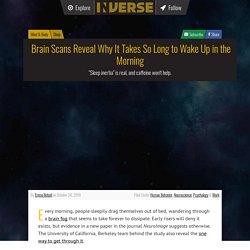 Early risers will deny it exists, but evidence in a new paper in the journal NeuroImage suggests otherwise. The University of California, Berkeley team behind the study also reveal the one way to get through it. The term for that cognitive fog is “sleep inertia,” but before the current study we’ve never been quite sure why people experience it, says Raphael Vallat, Ph.D., the lead study author and post-doctoral fellow at The University of California, Berkeley. In the paper, he proposes a reason why it exists: Even when the body is awake and moving in the morning, its brain is asleep in some capacity for some time after. I tried the U.S. Army's tactic to fall asleep in two minutes. If you often find yourself having trouble falling sleep, you’re not alone. The American Sleep Association (ASA) says that 50 million to 70 million U.S. adults have a sleep disorder. Among that group, insomnia is the most common.

The ASA says that 30% of adults have reported short-term, insomnia-like symptoms, and 10% of American adults deal with chronic insomnia. How to Recover From a Night of Bad Dreams. Photo: Masaaki Toyoura/Getty Images I haven’t slept very well this week (I blame a very enjoyable concert which forced me to miss my bedtime by three full hours), and perhaps as a result, have had some pretty gnarly nightmares. 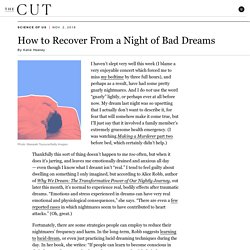 And I do not use the word “gnarly” lightly, or perhaps ever at all before now. Finally, a cure for insomnia? We live in a golden age of sleeplessness. The buzz of the all-night streetlamps, the natter of 24-hour news anchors, the scrolling Niagaras of social media feeds have built a world that is hostile to sleep. Night is no longer clearly delineated from day. The bedroom is no longer a refuge from the office. The physical and psychic walls that once held back the tides of work and social interaction have failed. As the essayist Jonathan Crary put it, sleeplessness is the inevitable symptom of an era in which we are encouraged to be both unceasing consumers and unceasing creators. Vitals.lifehacker. How to sleep better. This Is How To Sleep Better: 5 Secrets From Neuroscience.

Before we commence with the festivities, I wanted to thank everyone for helping my first book become a Wall Street Journal bestseller. If you love staying up late and sleeping in, doing otherwise might actually hurt your health. Night owls might get a rap for staying up too late watching Netflix or getting lost in meme spirals on the web, but it’s not all fun and games. Study after study shows the later you sleep and rise, the more likely you are to develop some serious health complications. A new paper by researchers from Northwestern University and the University of Surrey in the UK doubles down on the findings that night owls are more likely to suffer from a host of different diseases and disorders—diabetes, mental illnesses, neurological problems, gastrointestinal issues, and heart disease, to name a few.

It also concludes, for the first time, that night owls had a 10 percent increased risk of dying (in the time period used in the study) compared to those who are early to rise and early to sleep (a.k.a. larks). 11 Reasons You Might Be Tired, Even After Sleeping Well. Lifehack. ELI5: Is laying in bed with your eyes closed worth anything at all compared to sleep? : explainlikeimfive. Scientists discover why some thrive on less sleep than others. Researchers at the American Academy of Sleep Medicine conducted a study to find out why a small percentage of people appear to only need six hours of sleep whereas most everyone else needs between eight and nine hours for optimal functioning during the day. The Perfect Sleeping Positions to Fix Common Body Problems. Ca.shine.yahoo.com-sleep-better-tonight.html.url. Pink, yellow and orange bed pillows. Want to Sleep Better? First, Reduce Your Cortisol Levels then Follow These Six Key Tips. Trouble sleeping?

The Best Time to Work When You're Sleep Deprived. Why do we sleep? The Real Reason We Yawn - WSJ.