Phulkari from the realm of women. Gaatha - tales of Indian handicrafts and an opportunity of livelihood for Indian artisans. As the local legend goes, a ‘Raffoogar’ (darner) named Alibaba lived in the valley of Kashmir. 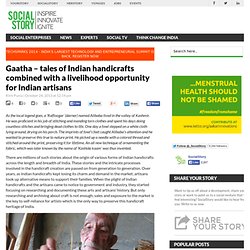 He was proficient in his job of stitching and mending torn clothes and spent his days doing countless stitches and bringing dead clothes to life. One day a fowl stepped on a white cloth lying around, drying on his porch. The imprints of fowl’s feet caught Alibaba’s attention and he wanted to preserve this true to nature print. He picked up a needle with a colored thread and stitched around the print, preserving it for lifetime. An all new technique of ornamenting the fabric, which was later known by the name of ‘Kashida kaam’ was thus invented. Reviving a Legacy: Traditional Indian Arts. Traditional wooden toys made in Rajasthan; Photo Courtesy: Subhadip Mukherjee, SXC Whether it is the riveting Patachitra cloth paintings born in the Jagannath Temple in Puri, the vibrant and stark lacquer work from Rajasthan or the elaborate bidri craft from Karnataka and Hyderabad, traditional Indian arts embody the highest levels of artistic excellence, with a legacy that dates back hundreds of years. 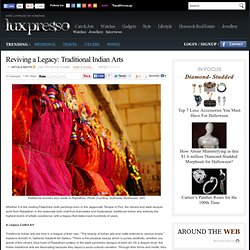 A Legacy Called Art Traditional Indian arts are truly in a league of their own. "The beauty of Indian arts and crafts extends to various levels," explains Srinidhi K, Gallerist, Kalakriti Art Gallery. "There is the physical beauty which is purely aesthetic, whether you speak of the vibrant, blue hues of Rajasthani pottery or the stark symmetric designs of warli art. Jasleen Dhamija on the symbolism on Phulkaris. Paper presented at MANTLES OF MYTH: THE NARRATIVE IN INDIAN TEXTILESFlower fields of Textile Landscapes: The Pictorial Phulkari of PunjabSiyahi, Jaipur - 13 – 15 December, 2008 Woven fabrics, embellished and embroidered express the history of the those who weave it and of those for whom they are woven. 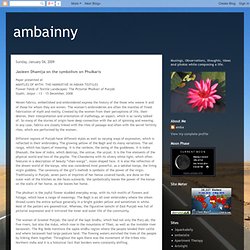 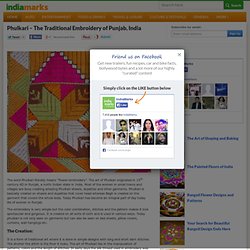 The art of Phulkari originated in 15th century AD in Punjab, a north Indian state in India. Most of the women in small towns and villages are busy creating amazing Phulkari shawls, dupattas and other garments. Phulkari is basically created on shawls and dupattas that cover head whereas Bagh is created on the garment that covers the whole body. Www.cohands.in/handmadepages/book66.asp?t1=66&lang=English. Www.cohands.in/handmadepages/book66.asp?t1=66&lang=English. Threads of Punjab. I met Lajwanti[i] Parvati Maasi[ii], Prito Aunty and Bakshi Rana in April 2013 at the Indira Gandhi National Centre for Arts in New Delhi. 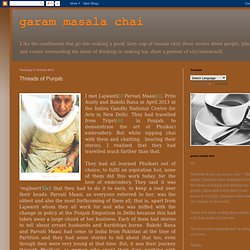 They had travelled from Tripri[iii] in Punjab, to demonstrate the art of Phulkari embroidery. But while sipping chai with them and chatting, hearing their stories, I realised that they had travelled much farther than that. They had all learned Phulkari out of choice, to fulfil an aspiration but, none of them did this work today, for the love of embroidery.

They said it was ‘majboori’[iv] that they had to do it to earn, to keep a roof over their heads. Indian,inde,himalaya,art,antique,mask,masque,primitif,primitive,nepal,tibet. Collections Object : Chope Phulkari. The Journal of Asian Studies, Vol. 58, No. 2 (May, 1999), pp. 361-388. What were colonial spinning bees. Sausan Reads – Malaysia. Foreword: First, let me explain how after returning to Ireland from Malaysia, Singapore, Tanzania and London recently, my reading world became incredibly revolutionized. 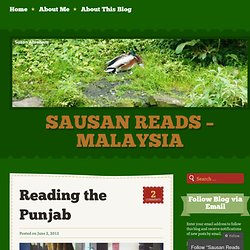 It was almost as if on engaging with the photography of specific cultural elements afforded to shopkeepers, restaurateurs, streets, towns, alleyways and marketplaces, plus talking with booksellers and visiting local bookshops in numerous places so that I could purchase and indulge in my own brand of obscure literature… that I received a certain spiritual enlightenment.

I derived such an insatiable thirst for cultural stories in books and films… even greater than usual, from when I first encountered this passion, once-upon-a-time in March 2008. Then my life was forever changed after viewing Tehran’s award-winning film-maker, Niki Karimi’s poignant cinematic production titled One Night, on Irish television. Clearly, my hunger to absorb such literature, seems magical. Also: How Amrita Pritam Inspired Me. Dr. Dalip Kaur Tiwana. Dr. 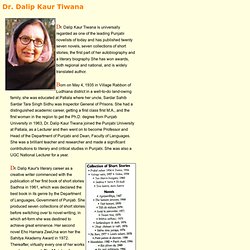 Dalip Kaur Tiwana is universally regarded as one of the leading Punjabi novelists of today and has published twenty seven novels, seven collections of short stories, the first part of her autobiography and a literary biography She has won awards, both regional and national, and is widely translated author. Born on May 4, 1935 in Village Rabbon of Ludhiana district in a well-to-do land-owing family, she was educated at Patiala where her uncle, Sardar Sahib Sardar Tara Singh Sidhu was Inspector General of Prisons. She had a distinguished academic career, getting a first class first M.A., and the first woman in the region to get the Ph.D. degree from Punjab University in 1963, Dr. Tarlo, Emma, Goldsmiths, University of London. Position held: Professor Phone: +44 (0)20 7919 7804 Email:e.tarlo (@gold.ac.uk) Address: Department of Anthropology Goldsmiths, University of London New Cross London SE14 6NW Office hours: On leave 2013-16 Emma Tarlo has conducted long term anthropological fieldwork in India and Britain. 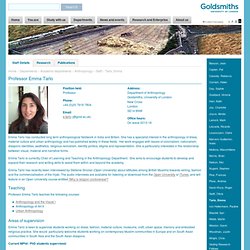 Emma Tarlo is currently Chair of Learning and Teaching in the Anthropology Department. Emma Tarlo has recently been interviewed by Stefanie Sinclair (Open University) about attitudes among British Muslims towards veiling, fashion and the commercialisation of the hijab. Teaching Professor Emma Tarlo teaches the following courses: The Child Bride - Amrita Sher-Gil. Three Girls, by Amrita Sher-Gil, 1935 - Old Indian Arts. The Journal of Asian Studies, Vol. 58, No. 2 (May, 1999), pp. 361-388. Hindustan Times e-Paper. Punjabi by Nature. Phulkari is the popular embroidery technique of Punjab and also a happy blend of colours and culture. 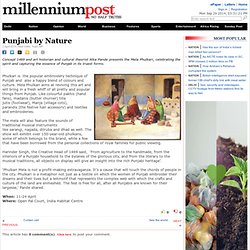 Mela Phulkari aims at reviving this art and will bring in a fresh whiff of all pretty and popular things from Punjab. Like colourful pakhis (hand fans), madanis (butter churner) tilla jutis (footwear), Manja (village cots), parandis (the festive hair accessory) and textiles and embroideries. The mela will also feature the sounds of traditional musical instruments like sarangi, nagada, dilruba and dhad as well. The show will exhibit over 150-year-old phulkaris, some of which belongs to the brand, while a few that have been borrowed from the personal collections of royal families for public viewing. Harinder Singh, the Creative Head of 1469 said, ‘From agriculture to the handmade, from the interiors of a Punjabi household to the bylanes of the glorious city, and from the literary to the musical traditions, all objects on display will give an insight into the rich Punjabi heritage’. A ‘Phul’ House. Once the pride of a Punjabi wardrobe, phulkari has, over the years, been relegated to just the trousseau. 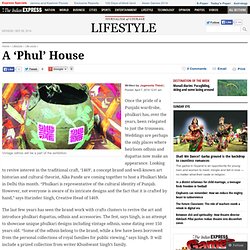 Weddings are perhaps the only places where heirloom odhnis and dupattas now make an appearance. Manish Draws a ‘Phul’ House. Bollywood's favourite designer, Manish Malhotra, gives Punjab's traditional embroidery, Phulkari, a contemporary makeover. A phulkari dupatta or odhni is among the most prized possessions in a Punjabi bride's trousseau. Phulkari literally means "art of flower" (phul comes from the word flower and kari is the technique of hand embroidery). The Art and Culture of the Diaspora.

Design Resource - Phulkari - History. The origin of Phulkari has not been traced. Where, Phulkari has been mentioned in the famous, Punjabi folklore of Heer Ranjha (a love tale) by Waris Shah. “Its present form and popularity goes back to 15th century, during Maharaja Ranjit Singh's Reign”. Phulkari plays a very important role in a girl’s life. A WSIC Concern Home. Women Becoming Economically Independent with Phulkari in Punjab. A WSIC Concern Phulkari Facts. Phulkari literally means flower craft.

It is also called "Bagh" which means a garden. Chandigarh Stories. Patiala embroidery units' artisans an exploited lot. The Patiala Handlloom Handicraft Workshop Cooperative Industrial Society Ltd in SST Nagar, Patiala. Phulkari empowers women in Punjab. Chamba Rumal - Embroidery of Himachal Pradesh - Important India. Himachal Pradesh is famous for Chamba Rumal embroidery. The Chamba Rumals are made of fine cotton or muslin and are embroidered with silk and sometimes with silver and silver gilt wire. It is presumed that the subjects were drawn in outline by the women themselves.

Indian Weaves NORTH. Phulkari blooms again. Rachna Bisht-Rawat. I See No Stranger. Traditional Embroideries of India - Shailaja D. Naik. HER WORLD. SOCIAL MONITOR Breaching the wall of silence to ask for justice IN the history of communal conflict in post-Independence India, the riots in Gujarat - in February and March 2002 - were perhaps the first time the aggressors unleashed sexual violence on such a conspicuous scale. The cloak of stigma and silence hanging over the sexual assault of women during Partition is only now being withdrawn, more than two generations later. Phulkari workers get peanuts. Staff Reporter. Phulkari. Phulkari.