I am on a grand quest, the collective heroes journey. Join us, so that we might emerge to manifest projects which benefit the lives of people like YOU. #Empathy 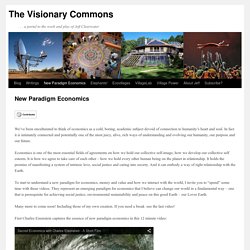 In fact it is intimately connected and potentially one of the most juicy, alive, rich ways of understanding and evolving our humanity, our purpose and our future. Economics is one of the most essential fields of agreements on how we hold our collective self-image, how we develop our collective self esteem. DARK DATA/ Gameshifting Effect: #Scenius.

The Buckminster Fuller Institute. Imagine, Possible, Test, Prove. I was trying to understand a paper by a friend who does evolutionary algorithms. 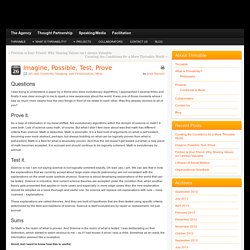 I approached it several times and finally it was clear enough in me to spark a new awareness about the world. It was one of those moments where I saw so much more clearly how the very things in front of me relate to each other. Was this already obvious to all of you? Prove it. So a map of information in my head shifted. Test it. Science is not. Future-of-working.pdf. Creating the 21st Century Company: Knowledge Intensive, People Rich: Rene Tissen, Frank Lekanne Deprez, Daniel Andriessen: 9789067899291: Amazon.com: Books. Global Dynamics Processes: the Pattern which Connects from KaliYuga to Tao: Metalogue: what is the instinct of Tao? Reshaping Business and Capitalism for the 21st Century - The CIO Report. MAGAZINE - Future-Ready Now! We created the FUTURE-READY NOW! 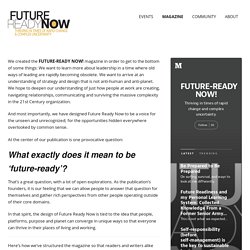 Magazine in order to get to the bottom of some things: We want to learn more about leadership in a time where old ways of leading are rapidly becoming obsolete. We want to arrive at an understanding of strategy and design that is not anti-human and anti-planet. We hope to deepen our understanding of just how people at work are creating, navigating relationships, communicating and surviving the massive complexity in the 21st Century organization. And most importantly, we have designed Future Ready Now to be a voice for the unseen and unrecognized; for the opportunities hidden everywhere overlooked by common sense. Quora. Reshaping Business and Capitalism for the 21st Century - The CIO Report. Adventure Capital - LUMAN. Markets are becoming more and more conscious because people are. 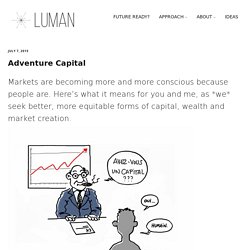 Here’s what it means for you and me, as *we* seek better, more equitable forms of capital, wealth and market creation. A few weeks ago, I flew to Oakland, California to meet with a group of friends and colleagues regarding a new economic construct for investing in ecosystems. This means a lot of things (too much to address specifically in this very post), but at some point in our collaboration, someone in the group had asked rather emphatically: “Why can’t investments in startups succeed for 100% of people, 100% of the time?” You can see Bucky Fuller smiling from the heavens with that question. And it’s a great question; I’ve pondered this numerous times over the years as I scrutinized term sheets, developed prototypes, or watched teams implode for any number of reasons. Money itself or return on investment isn’t really the core problem. Presencing Institute: Transitioning from Ego-system to Eco-system Economies - 1440 Foundation. Katrin Kaeufer This post was written by Katrin Kaeufer and Otto Scharmer of the Presencing Institute. 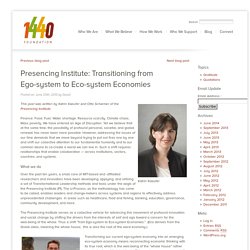 Finance. Food. Fuel. ~ Discover the world is whole, again ~ From Ego to Eco: A New Sense of Self. The fact that we have become more preoccupied with brand logos than the preservation of the biotic systems on which our lives depend, suggests that we have somehow forgotten who and what we are and where we came from. 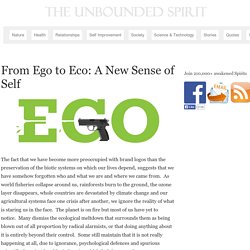 As world fisheries collapse around us, rainforests burn to the ground, the ozone layer disappears, whole countries are devastated by climate change and our agricultural systems face one crisis after another, we ignore the reality of what is staring us in the face. The planet is on fire but most of us have yet to notice. Many dismiss the ecological meltdown that surrounds them as being blown out of all proportion by radical alarmists, or that doing anything about it is entirely beyond their control. Some still maintain that it is not really happening at all, due to ignorance, psychological defences and spurious scientific data circulated by industries which feel threatened. Basic logic also reveals that we cannot be limited to the mind or the body. The Eco (Not Ego) Perspective – Center for Positive Organizations. August 20, 2015 By: Robert E. 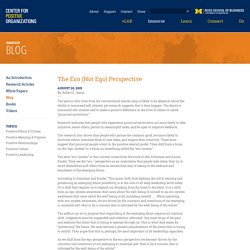 Quinn The person who lives from the conventional mental map is likely to be skeptical about the ability to transcend self-interest, yet research suggests that it does happen. The desire to transcend self-interest and to make a positive difference in the lives of others is called “prosocial motivation.” Research indicates that people who experience prosocial motivation are more likely to take initiative, assist others, persist in meaningful tasks, and be open to negative feedback.

The research also shows that people who pursue the common good, are more likely to motivate others, stimulate them to new ideas, and inspire their creativity. GPF_2014_Brochure_Final.pdf.