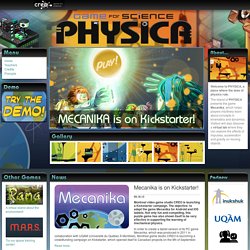 Montreal video game studio CREO is launching a Kickstarter campaign. The objective: to adapt the game Mecanika for Android and iOS tablets. Not only fun and compelling, this puzzle game has also shown itself to be very effective in supporting the learning of mechanical physics. In order to create a tablet version of its PC game Mecanika, which was produced in 2011 in collaboration with UQAM (Université du Québec À Montréal), Montreal game studio CREO is launching a crowdfunding campaign on Kickstarter, which opened itself to Canadian projects on the 9th of September. Read more Designed by François Boucher-Genesse, a former game designer on Halo 3 who now holds a master’s degree in educational sciences, the game aims to be both fun and effective in stimulating learning. 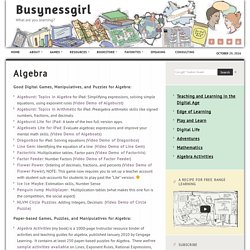 Math Games- Pre-Algebra Games. Math Interactives. Interactive: Buoyancy. Who Doesn't Want to Be A Millionaire? High School Math Odyssey Quiz. Calculus I. Show Mobile NoticeShow All NotesHide All Notes You appear to be on a device with a "narrow" screen width (i.e. you are probably on a mobile phone). 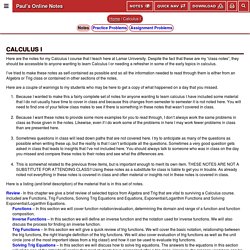 Due to the nature of the mathematics on this site it is best views in landscape mode. If your device is not in landscape mode many of the equations will run off the side of your device (should be able to scroll to see them) and some of the menu items will be cut off due to the narrow screen width. Here are the notes for my Calculus I course that I teach here at Lamar University. Despite the fact that these are my “class notes”, they should be accessible to anyone wanting to learn Calculus I or needing a refresher in some of the early topics in calculus. I’ve tried to make these notes as self-contained as possible and so all the information needed to read through them is either from an Algebra or Trig class or contained in other sections of the notes. 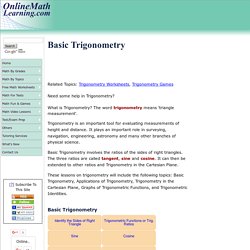 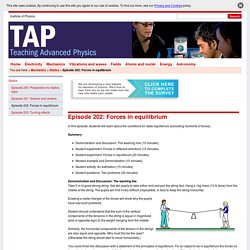 Ask two pupils to take either end and pull the string taut. Hang a 1kg mass (10 N force) from the middle of the string. Drawing a vector triangle of the forces will show why the pupils have had such problems. Student should understand that the sum of the vertical components of the tensions in the string is equal in magnitude (and of opposite sign) to the weight hanging from the middle.

Similarly, the horizontal components of the tension in the strings are also equal and opposite. Table of Contents. Nuffield Foundation. This website is for teachers of physics in schools and colleges. 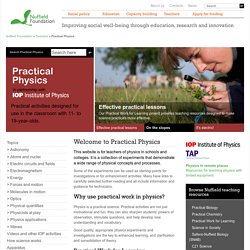 It is a collection of experiments that demonstrate a wide range of physical concepts and processes. Some of the experiments can be used as starting-points for investigations or for enhancement activities. Many have links to carefully selected further reading and all include information and guidance for technicians. Physics is a practical science. Practical activities are not just motivational and fun: they can also sharpen students’ powers of observation, stimulate questions, and help develop new understanding and vocabulary.

Good quality, appropriate physics experiments and investigations are the key to enhanced learning, and clarification and consolidation of theory. We have published a new set of resources to support the teaching of practical science for Key Stages 3-5.