US involvement in Vietnam 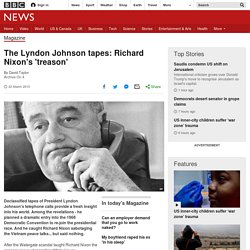 Among the revelations - he planned a dramatic entry into the 1968 Democratic Convention to re-join the presidential race. And he caught Richard Nixon sabotaging the Vietnam peace talks... but said nothing. After the Watergate scandal taught Richard Nixon the consequences of recording White House conversations none of his successors has dared to do it. 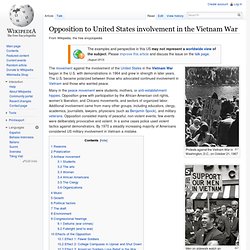 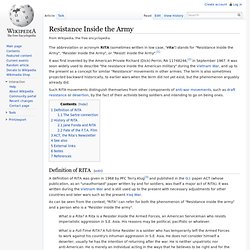 Inside the Army".[1] It was first invented by the American Private Richard (Dick) Perrin, RA 11748246,[2] in September 1967. It was soon widely used to describe "the resistance inside the American military" during the Vietnam War, and up to the present as a concept for similar "Resistance" movements in other armies. The term is also sometimes projected backward historically, to earlier wars when the term did not yet exist, but the phenomenon arguably already did. Such RITA movements distinguish themselves from other components of anti-war movements, such as draft resistance or desertion, by the fact of their activists being soldiers and intending to go on being ones. Definition of RITA[edit] What is a Rita? Bed-In. As the Vietnam War raged in 1969, John Lennon and his wife Yoko Ono held two week-long Bed-Ins for Peace, one in Amsterdam and one in Montreal, each of which were intended to be non-violent protests against wars, and experimental tests of new ways to promote peace. 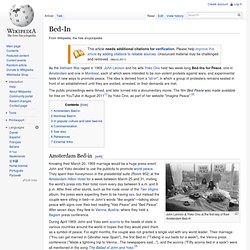 The idea is derived from a "sit-in", in which a group of protesters remains seated in front of an establishment until they are evicted, arrested, or their demands are met. The public proceedings were filmed, and later turned into a documentary movie. The film Bed Peace was made available for free on YouTube in August 2011[1] by Yoko Ono, as part of her website "Imagine Peace".[2] Amsterdam Bed-in[edit] John Lennon & Yoko Ono at the first day of their Amsterdam Bed-In Knowing their March 20, 1969 marriage would be a huge press event, John and Yoko decided to use the publicity to promote world peace. VID: John Lennon & Yoko Ono: Give Peace A Chance. John Lennon and Yoko Ono's Bed-In - Photo Essays. Thich Quang Duc. Kent State shootings. Memorial to Jeffrey Miller, taken from approximately the same perspective as John Filo's famous 1970 photograph as it appears today. 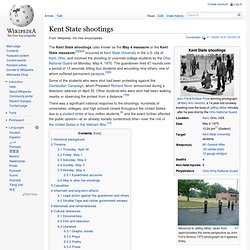 The Kent State shootings (also known as the May 4 massacre or the Kent State massacre)[2][3][4] occurred at Kent State University in the U.S. city of Kent, Ohio, and involved the shooting of unarmed college students by the Ohio National Guard on Monday, May 4, 1970. The guardsmen fired 67 rounds over a period of 13 seconds, killing four students and wounding nine others, one of whom suffered permanent paralysis.[5][6] Some of the students who were shot had been protesting against the Cambodian Campaign, which President Richard Nixon announced during a television address on April 30.

Other students who were shot had been walking nearby or observing the protest from a distance.[7][8] VID: Kent State Incident Video — History.com. VID: Turning point in US anti-war movement. South Vietnamese Chief of Police executing suspect. Burning draft cards. Burning draft cards (2) Vietnam War > Links. US troop strength in Vietnam. US fatalities in Vietnam. VID: The Vietnam "War" in Ten Minutes. Where Historians Disagree. Media, Propaganda and Vietnam.

The “official” or commonly accepted version of how and why the U.S. was involved in Vietnam sort of goes along the following lines: Yet, it turns out that this is untrue, and it required massive propaganda to create this standard and accepted image. 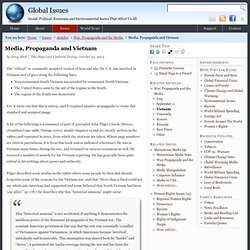 A lot of the following is a summary of part of journalist John Pilger’s book, Heroes, (Jonathan Cape 1986, Vintage 2001), mainly chapters 15 and 20, mostly written in the 1980s (and reprinted in 2001, from which the citations are taken. Where page numbers are cited in parenthesis, it is from this book unless indicated otherwise). He was in Vietnam many times, during the war, and returned on various occassions as well. He received a number of awards for his Vietnam reporting. Many have claimed that the media contributed to the U.S. losing the war, because the media was generally against the war. The Vietnam War The context in which Vietnam appeared to fall under Soviet influence is critical. (Side Note»J.W. As J.W. . — J.W. John Dumbrell, Vietnam: American Involvement at Home and Abroad. Timechart: Vietnam War. Timeline 1945-1960. Timeline 1961-1964. Timeline 1965-1968.