Deliberate Practice: The Secret of Greatness. Lessons from 12 years in the Fitness Industry. This has taken me quite a while to write, I’ve put stuff in, taken stuff out but I’ve came up with that I think will not only help you become successful but also stop you from losing your mind! 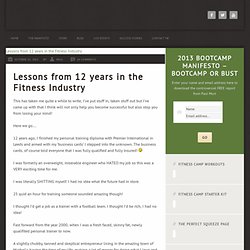 Here we go… 12 years ago, I finished my personal training diploma with Premier International in Leeds and armed with my ‘business cards’ I stepped into the unknown. The business cards, of course told everyone that I was fully qualified and fully insured! I was formerly an overweight, miserable engineer who HATED my job so this was a VERY exciting time for me. I was literally SHITTING myself. 25 quid an hour for training someone sounded amazing though! I thought I’d get a job as a trainer with a football team. Fast forward from the year 2000, when I was a fresh faced, skinny fat, newly qualifited personal trainer to now. How times have changed. Fitness for New Fathers: How to Avoid Being a Fat Dad. Editor’s note: This is a guest post by Jon Finkel. 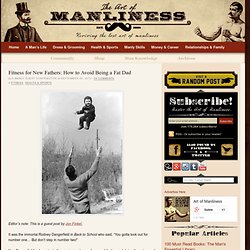 It was the immortal Rodney Dangerfield in Back to School who said, “You gotta look out for number one… But don’t step in number two!” Yes, Dangerfield’s character in the movie was known for armpit farting and doing the esteemed Triple Lindy dive, but he was also a self-made millionaire and the CEO of a major company. The Art of Dadliness: How to Get Your Kids to Do Their Chores (And Why It’s So Important They Do Them) Every dad wants his children to grow up to be responsible, contributing members of society. 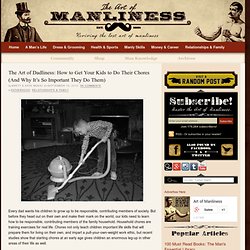 But before they head out on their own and make their mark on the world, our kids need to learn how to be responsible, contributing members of the family household. Household chores are training exercises for real life. Chores not only teach children important life skills that will prepare them for living on their own, and impart a pull-your-own-weight work ethic, but recent studies show that starting chores at an early age gives children an enormous leg-up in other areas of their life as well. Unfortunately, very few children today are getting the training at home they need to become industrious, responsible adults. Studies show that children in the West spend little time helping around the house. Anthropologists studying child-rearing across cultures have noted that this “chore strike” by children is primarily a Western phenomenon. The Benefits of Chores. The Bushido Code: The Eight Virtues of the Samurai. Activate Fitness: Awake and Alive: 10 tips to Kick Ass.

Never before in my life have I felt so "Awake and Alive". 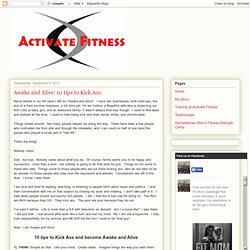 I have two businesses, both start-ups, the plot of a third (on-line) business, a full time job, I'm am Author, a Beautiful wife who is expecting our first child (a baby girl), and an awesome family. It wasn't always that way though. I used to feel dead and drained all the time. I used to hate being sick and tired, alone, broke, and unmotivated.

Things turned around. That's the thing! Nobody cares. Sad.. but true. I am sick and tired of reading, watching, or listening to people bitch about taxes and politics. The Self Made Blog: The Monk Who Sold His Ferrari. Image courtesy of "Man… sacrifices his health in order to make money. 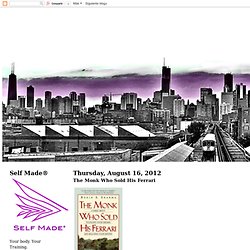 Then he sacrifices money to recuperate his health. And then he is so anxious about the future that he does not enjoy the present; the result being that he does not live in the present or the future; Be Charismatic and Influential. Source: Life We’ve probably all seen those men who can enter any room and instantly command it. 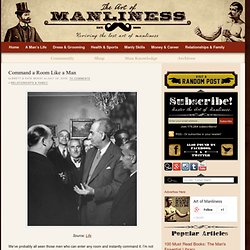 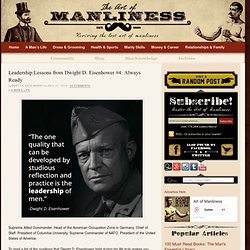 Head of the American Occupation Zone in Germany. Chief of Staff. President of Columbia University. Supreme Commander of NATO. President of the United States of America. Top five regrets of the dying. There was no mention of more sex or bungee jumps. 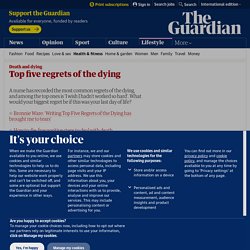 A palliative nurse who has counselled the dying in their last days has revealed the most common regrets we have at the end of our lives. And among the top, from men in particular, is 'I wish I hadn't worked so hard'. Bronnie Ware is an Australian nurse who spent several years working in palliative care, caring for patients in the last 12 weeks of their lives. A Man Is Punctual: The Reasons You’re Late and How to Always Be on Time. Read Part I: The Importance of Being on Time Being punctual is a skill any man can master; it doesn’t take any special talents or abilities. 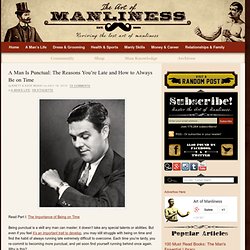 But even if you feel it’s an important trait to develop, you may still struggle with being on time and find the habit of always running late extremely difficult to overcome. Each time you’re tardy, you re-commit to becoming more punctual, and yet soon find yourself running behind once again.