Scott Walker (politician) Sarah Palin. Sarah Louise Palin ( She was elected to Wasilla City Council in 1992 and became mayor of Wasilla in 1996. 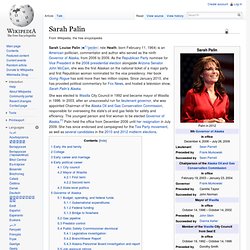 Condoleezza Rice. Following her confirmation as Secretary of State, Rice pioneered the policy of Transformational Diplomacy directed toward expanding the number of responsible democratic governments in the world and especially in the Greater Middle East. 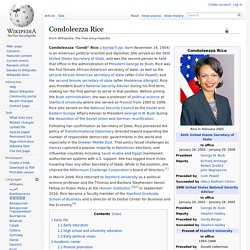 That policy faced challenges as Hamas captured a popular majority in Palestinian elections, and influential countries including Saudi Arabia and Egypt maintained authoritarian systems with U.S. support. She has logged more miles traveling than any other Secretary of State. While in the position, she chaired the Millennium Challenge Corporation's board of directors.[1] In March 2009, Rice returned to Stanford University as a political science professor and the Thomas and Barbara Stephenson Senior Fellow on Public Policy at the Hoover Institution.[2][3] In September 2010, Rice became a faculty member of the Stanford Graduate School of Business and a director of its Global Center for Business and the Economy.[4] Early life Early education Early political views.

George W. Bush. Bush left office in 2009, returning to Texas where he purchased a home in suburban Dallas. 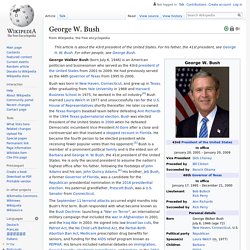 He is currently a public speaker, and has written a memoir, Decision Points.[17] His presidential library was opened in 2013. His presidency has been ranked among the worst in surveys of presidential scholars published in the late 2000s and 2010s.[18][19][20] Childhood to mid-life Early life and education George W. Jeb Bush. Bush grew up in Houston, Texas. 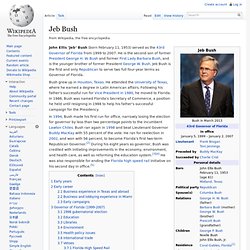 He attended the University of Texas, where he earned a degree in Latin American affairs. Following his father's successful run for Vice President in 1980, he moved to Florida. John Kerry. Barack Obama. Barack Hussein Obama II ( i/bəˈrɑːk huːˈseɪn oʊˈbɑːmə/; born August 4, 1961) is the 44th and current President of the United States, and the first African American to hold the office. 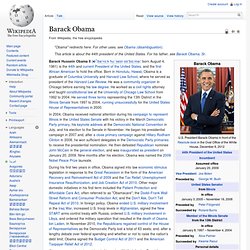 Born in Honolulu, Hawaii, Obama is a graduate of Columbia University and Harvard Law School, where he served as president of the Harvard Law Review. He was a community organizer in Chicago before earning his law degree. He worked as a civil rights attorney and taught constitutional law at the University of Chicago Law School from 1992 to 2004. He served three terms representing the 13th District in the Illinois Senate from 1997 to 2004, running unsuccessfully for the United States House of Representatives in 2000. Obama was re-elected president in November 2012, defeating Republican nominee Mitt Romney, and was sworn in for a second term on January 20, 2013. 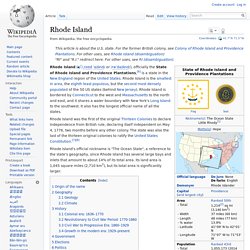 Rhode Island is the smallest in area, the eighth least populous, but the second most densely populated of the 50 US states (behind New Jersey). Rhode Island is bordered by Connecticut to the west and Massachusetts to the north and east, and it shares a water boundary with New York's Long Island to the southwest. Ouest américain. Impérialisme américain. Un article de Wikipédia, l'encyclopédie libre. 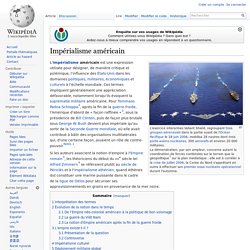 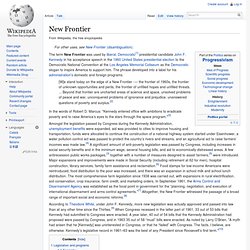 Beyond that frontier are uncharted areas of science and space, unsolved problems of peace and war, unconquered problems of ignorance and prejudice, unanswered questions of poverty and surplus.[2] In the words of Robert D. Marcus: "Kennedy entered office with ambitions to eradicate poverty and to raise America’s eyes to the stars through the space program. Programme Apollo. Partial Nuclear Test Ban Treaty. 7 October 1963 President Kennedy signs the Limited Nuclear Test Ban Treaty in the Treaty Room at the White House. 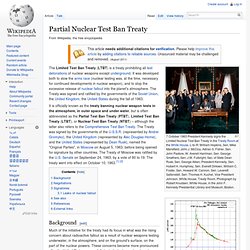 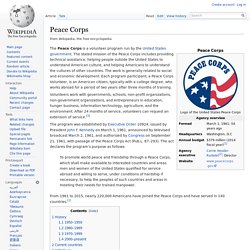 The stated mission of the Peace Corps includes providing technical assistance, helping people outside the United States to understand American culture, and helping Americans to understand the cultures of other countries. The work is generally related to social and economic development. North American fur trade. The North American fur trade was the industry and activities related to the acquisition, trade, exchange, and sale of animal furs in the North American continent. Trail of Tears. Many Native Americans suffered from exposure, disease and starvation on the route to their destinations. Sitting Bull. Sitting Bull (Lakota: Tȟatȟáŋka Íyotake in Standard Lakota Orthography,[2] also nicknamed Slon-he or "Slow"; c. 1831 – December 15, 1890) was a Hunkpapa Lakota holy man who led his people as a tribal chief during years of resistance to United States government policies.

He was killed by Indian agency police on the Standing Rock Indian Reservation during an attempt to arrest him, at a time when authorities feared that he would join the Ghost Dance movement.[3] §Early life[edit] Sitting Bull was born in Dakota Territory.[4][5] In 2007, Sitting Bull's great-grandson asserted from family oral tradition that Sitting Bull was born along the Yellowstone River, south of present-day Miles City, Montana.[6] He was named Jumping Badger at birth.[7] When Jumping Badger was fourteen years old he accompanied a group of Lakota warriors (which included his father and his uncle Four Horns) in a raiding party to take horses from a camp of Crow warriors. §Red Cloud's War[edit] §Surrender[edit] Indian reservation. The collective geographical area of all reservations is 55,700,000 acres (22,500,000 ha; 87,000 sq mi; 225,000 km2), representing 2.3% of the area of the United States 2,379,400,204 acres (962,909,100 ha; 3,717,812.819 sq mi; 9,629,091.00 km2).

Frontier Thesis. The Frontier Thesis or Turner Thesis, is the argument advanced by historian Frederick Jackson Turner in 1893 that American democracy was formed by the American Frontier. Western United States. Highway and open space, Northern Arizona. Yellowstone National Park. Aerial view, 3D computer generated image Yellowstone National Park (Arapaho: Henihco'oo or Héetíhco'oo)[4] is a national park located primarily in the U.S. state of Wyoming, although it also extends into Montana and Idaho. Transcontinental railroad. Transcontinental railroads in and near the United States (1887). A transcontinental railroad is a contiguous network of railroad trackage[1] that crosses a continental land mass with terminals at different oceans or continental borders. Native Americans in the United States.