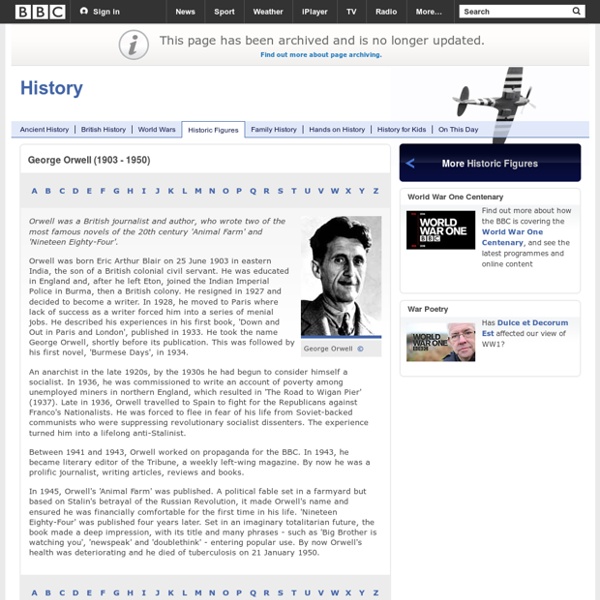 Vladimir Lenin Vladimir Illich Ulyanov (later known as Lenin) was born in Simbirsk, Russia, on 10th April, 1870. His father, Ilya Ulyanov, a former science teacher, had recently become a local schools inspector. He held conservative views and was a devout member of the Russian Orthodox Church. Lenin had two older siblings, Anna (born 1864) and Alexander (born 1868). They were followed by three more children, Olga (born 1871), Dmitry (born 1874), and Maria (born 1878). Utopian and dystopian fiction Utopia and dystopia are genres of speculative fiction that explore social and political structures. Utopian fiction portrays a setting that agrees with the author's ethos, having various attributes of another reality intended to appeal to readers. Dystopian fiction (sometimes combined with but distinct from apocalyptic literature) offers the opposite: the portrayal of a setting that completely disagrees with the author's ethos.[1] Many[quantify] novels combine both, often as a metaphor for the different directions humanity can take, depending on its choices, ending up with one of two possible futures. Both utopias and dystopias are commonly found in science fiction and other speculative-fiction genres, and arguably are by definition a type of speculative fiction. More than 400 utopian works were published prior to the year 1900 in the English language alone, with more than a thousand others appearing during the 20th century.[2] Subgenres[edit]

Vladimir Lenin Lenin’s real name was Vladimir Illych Ulyanov. He changed it to Lenin while on the run from the secret police to avoid arrest. Lenin’s importance to Russia’s history cannot be overstated; in November 1917, Lenin established the first communist government when he overthrew the Provisional Government. Russia had the first communist government in the world. Lenin lead the Russian Communists to power in November 1917. Strictly this should read Russian Bolsheviks as the party Lenin had joined as a young man split in two in 1903. Nineteen Eighty-Four Nineteen-Eighty-Four is a novel published by George Orwell in 1949. It was his last work, written shortly before his death from a tubercular haemorrhage in 1950. It presents a dystopian view of a world which has been taken over by totalitarianism. The novel’s main protagonist, Winston Smith, briefly attempts small forms of resistance against the Party, which rules with the figurehead of Big Brother.

Vladimir Ilich Lenin (1870-1924) Vladimir Ilich Lenin was born on April 22, 1870 as Vladimir Ilich ULANOV but like many of his Marxist contemporaries (such as Stalin), he changed his surname to something which he thought rung more romantic. He was born into a well-to-do Simbirsk family.1 In 1887, Lenin's older brother was arrested and executed for terrorism. The execution marked Lenin as the publicity of the event prevented him from gaining admission to the Kazan University law School. But by 1892, he received his law degree, admittedly by correspondence courses, from St. George Orwell Biography George Orwell was the pseudonym of Eric Arthur Blair, born in Motihari, Bengal, India, in 1903, to a family which he described in The Road to Wigan Pier (1937) as ‘lower-upper middle class’: ‘upper-middle class without money’. According to his biographer Bernard Crick, Orwell used a pseudonym ‘partly to avoid embarrassing his parents, partly as a hedge against failure, and partly because he disliked the name Eric, which reminded him of a prig in a Victorian boys’ story’. He worked hard and won a place at Eton but while there dedicated himself more to reading widely than passing exams. Rather than going on to University, he took the Indian Civil Service exams and became a policeman in Burma in 1921 – he was probably the first and only old Etonian to attend the Burmese police training academy.

Vladimir Lenin Vladimir Lenin (1870-1924) was the founder and ideological mentor of the Bolshevik movement, the leader of the October Revolution and the first ruler of Soviet Russia. Most consider him the dominant figure of the Russian Revolution. Family and early life Nineteen Eighty-Four and the politics of dystopia Roger Luckhurst describes the political environment in which George Orwell wrote and published Nineteen Eighty-Four, and analyses its different – and often opposing – interpretations. Nineteen Eighty-Four Dust jacket of the first edition of George Orwell’s novel Nineteen Eighty-Four, first published in 1949. View images from this item (1) Russian revolutionary traditions Socialists parties like the Bolsheviks and Mensheviks emerged in the early 20th century – but they were not Russia’s first revolutionary groups. Russian revolutionary traditions can be traced back to the early part of the 19th century. The Decembrists

George Orwell’s Nineteen Eighty-Four So we’re in the Senate House of the University of London. This is an enormous 1930s tower that dominates the landscape that it’s over, and Orwell was interested in it, his first wife Eileen worked here, and in the Second World War it was the headquarters of the Ministry of Information, which controlled the press, propaganda and censorship. So in many ways very much like the Ministry of Truth in the novel. And he would see this building every day, and it stands proud above its landscape. And of course that landscape in the 1940s after the end of the war was a pretty rotten one.