It Was Just An Old TV Cabinet, Until They Transformed It Into THIS! Adorable! It’s certainly not always easy to come up with clever birthday present ideas for kids — especially if they’re curious, energetic 2-year-olds. 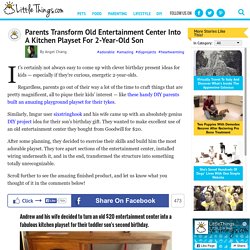 Regardless, parents go out of their way a lot of the time to craft things that are pretty magnificent, all to pique their kids’ interest — like these handy DIY parents built an amazing playground playset for their tykes. Similarly, Imgur user sixstringhook and his wife came up with an absolutely genius DIY project idea for their son’s birthday gift. They wanted to make excellent use of an old entertainment center they bought from Goodwill for $20. After some planning, they decided to exercise their skills and build him the most adorable playset. They tore apart sections of the entertainment center, installed wiring underneath it, and in the end, transformed the structure into something totally unrecognizable.

Scroll further to see the amazing finished product, and let us know what you thought of it in the comments below! 100 Years of Breed “Improvement” Everyone is free to copy this – in whole or in part – and slap it on their website without telling me about it. 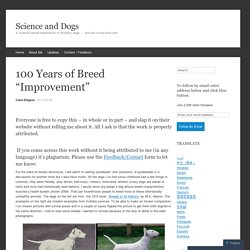 All I ask is that the work is properly attributed. If you come across this work without it being attributed to me (in any language) it’s plagiarism. Please use the Feedback/Contact form to let me know. For the sake of honest disclosure, I will admit to owning “purebreds” (the ‘pureness’ of purebreeds is a discussion for another time) but I also have mutts. All the dogs I’ve had since childhood had a few things in common, they were friendly, prey driven, ball-crazy, intense, motivated, athletic (crazy dogs are easier to train) and none had intentionally bred defects. It seems incredible that at one time the Bull Terrier was a handsome, athletic dog. It Can’t Even Fit In the Sink Because It’s Such A Chubby Bubby. 20 imagens de cães que ainda não perceberam que cresceram.

25 Cute GIFs of Dogs That Are So Lovey-Dovey You'll Weep. James Writer. 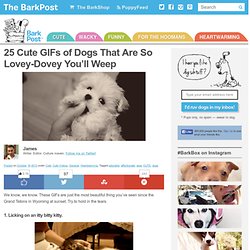 Editor. Culture maven. These 23 Puppies Snuggling With Their Favorite Stuffed Animals Will Definitely Brighten Your Day! Siberian Husky Dog Plays In A Giant Pile Of Leaves. 16 Dogs Who Are Bigger Than Their Owners. Guys. 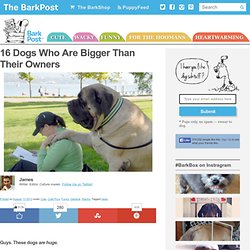 These dogs are huge. Click on the pics to view the image source. 1. Zeus, king of dog, man, house. They had to empty the house of furniture because Zeus here would accidentally drag it across the room as he walked to the water bowl. 2. 3. Bruno is just chilling, but secretly, he’s hoping Mindy goes for a dip so he can talk with Samantha alone. <3 4. George gets up every morning and pours cereal in a bowl for Mindy. 5. Steven is afraid of the floor, and heights. 6. Cute Dog GIFS. This Could Help Your Day: A Puppy in a Bowl. Breed Info - JustPuppies.net. Your iphone 5 arrived. My Pet Mushroom.

The Amazing World Of Dogs In Photography. Husky sleeping at red flower field. 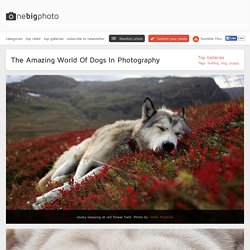 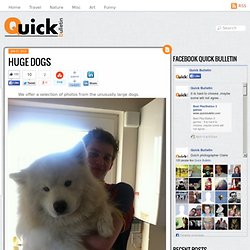 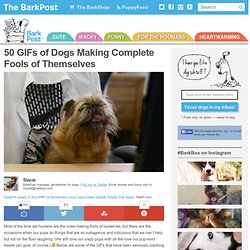 Find me on Twitter. Email stories and funny vids to Stacie@barkbox.com. Labrador-puppy-11-weeks.jpg (Imagem JPEG, 2769x2476 pixéis) - Dimensão/Escala (22%) Piglet-raised-by-dachshund - Cute - SmirkingLoon.com. Ready for a Walk. iRPf9WIGfXCdi.gif (Imagem GIF, 240x180 pixéis) 50 Cute Puppies. Our Best Friend, the Dog, has been around for thousands of years. 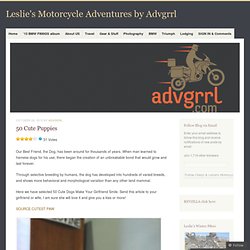 When man learned to harness dogs for his use, there began the creation of an unbreakable bond that would grow and last forever. Through selective breeding by humans, the dog has developed into hundreds of varied breeds, and shows more behavioral and morphological variation than any other land mammal. Here we have selected 50 Cute Dogs Make Your Girlfriend Smile. Send this article to your girlfriend or wife, I am sure she will love it and give you a kiss or more! Made You Smile « House of 34. Made You Smile I couldn’t resist sharing these pictures! 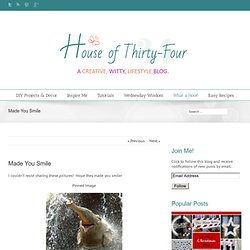 Smiling Dogs. Useful Dog Tricks. Most Beautiful Dogs Photos On Stumbleupon. Posted by Mick on Jul 17, 2012 in Dogs | 1 comment Site stumbleupon is very big company where you can found many things for plesure and for fun. 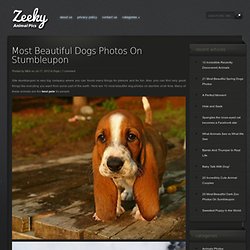 Also yoiu can find very great things like everyting you want from some part of the earth. Here are 10 most beautiful dog photos on stumble of all time. Many of these animals are the best pets for people. Let's Take A Minute To Appreciate Our Dogs. bDdST.jpg (Imagem JPEG, 642x458 pixéis) Teen Girl Shoots Beautiful and Creative Portraits of Her Pet Dogs. If you’re a dog lover, you’ve got to check out the photography of 17-year-old photographer Jessica Trinh. Her two main photo subjects are her two dogs: a Golden Retriever named Chuppy and an Australian Shepherd named Daisy. Over the past few years, Trinh has captured hundreds of beautiful and creative portraits of her furry happy-go-lucky friends, aided by her keen eye for spotting gorgeous lighting and happy expressions.

We dare you not to smile as you look through the images in this post. May-11-2012-21-01-30-fdvdfbv.jpeg (Imagem JPEG, 700x1047 pixéis) - Dimensão/Escala (53%) 15 Dogs and Their Teddy Bears. Ss-091103-animal-friends-12.ss_full.jpg (Imagem JPEG, 1200x796 pixéis) - Dimensão/Escala (70. Puppy in beeld: Denver. Funny Underwater Dog Pictures. Great collection by Seth Casteel Award-winning photographer Seth Casteel has been featured on GOOD MORNING AMERICA, EXTRA, CNN WORLD REPORT, THE TODAY SHOW, JEOPARDY! And in TIME Magazine. As one of the most published pet photographers in the world, his work can be seen in hundreds of magazines, calendars, posters, books and TV shows. Seth has also had the privilege of working with and photographing a variety of celebrities including Cesar Millan, Ellen DeGeneres, Amy Smart, Denise Richards, Perez Hilton, the cast of TWILIGHT and the cast of GLEE.

Happy Dog. Big dog + small dog. Dog Tucks Himself Into Bed *ORIGINAL VIDEO* Norman Rides a Bike. 1st meeting baby+ dog. Puppy Playing with mirror. Rescued dogs experience sunlight and grass 1st time. Ever wonder what an animal whose whole life has been dedicated to pharmaceutical research looks like when and if it is ever let out of a cage? Reports HuffPo: Forty male beagles raised inside a lab in Spain arrived in Los Angeles last week where they will be put up for adoption after being freed from captivity by the Beagle Freedom Project.The rescue mission is the largest yet for the group Animal Rescue Media Education (ARME). A total of 72 dogs were rescued in the effort, 32 of them having already been adopted in Europe, according to NBC Los Angeles.ARME’s Beagle Freedom Project spokesman Gary Smith said the beagles, all between ages 4 and 7, had lived in cages their entire lives.

“We’ve been told they lived one per cage in rooms of 10 beagles, but they never had any physical interaction with one another,” Smith told the station. Monkey playing with a puppy. Dog relaxes in bath. Puppy-love. Funny dogs. Doggies Before And After. These are the pictures of the doggies when they were puppies and when they grew up.

"If you think dogs can't count, try putting three dog biscuits in your pocket and then giving Fido only two of them. " ~ Phil Pastoret. Puppies asleep. Puppy. 50 Cute Puppies. Mommy dog has ducklings. Giant Dogs. Amazing Giant Dogs Every year there are millions of puppies born, some grow to be small, some grow to be big big and becomes unusual Giant Dogs. Sometimes seems like fake or real. Have a look and decide. Be Sociable, Share!