Paragard Lawsuit. Navigating the complex landscape of birth control can be overwhelming. 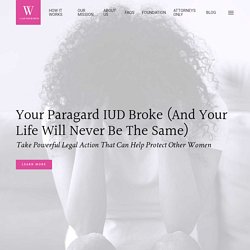 It’s hard to know what’s right for you. You thought maybe an IUD instead of a pill. Less maintenance, right? And you didn’t want those extra hormones; you heard they may not be safe. Paragard seemed like the perfect answer: an easy, low maintenance, hormone-free solution. All you wanted was (a) to be protected from pregnancy and (b) to be using a safe medical device, right?

We hate to say it, but: Paragard failed you. Paragard has been linked to a series of health problems, such as breaking during removal. This isn’t right. Contact us now to file a lawsuit and send a message that this is not okay. Copper Toxicity - Copper Toxicity. IUD Awareness - Accueil. Inner U Diagnosed? Director Kathryn Shasha Kathryn Shasha has been involved with film and television for over 20 years. 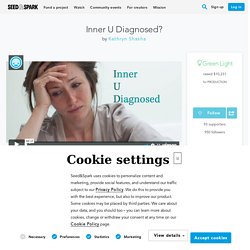 Though for the majority of the time has been spent in front of the camera as an actor, she has found a quick home on the opposite side in her directorial debut. The film “Inner U Destroyed?” Has a very personal significance for Kathryn, she herself had some of the rarest side effects from the IUD and had been consistently misdiagnosed.

In the past year she has worked as Executive Producer of the award winning film “Please Punish Me” and was Associate producer for Underground winner “Losing Face”. Because of her extensive ties throughout the New England and New York film industry, she was able to put together a strong team for this documentary that share her passion and vision. Ellen Becker-Gray Associate Producer/Writer Ellen Becker-Gray grew up in the seacoast town of Marblehead, Massachusetts. A teacher in that town's public schools from 1985 to 2005, she took early many levels. Project. IUD Problems. I’ve been meaning for several years to write about intrauterine devices (IUDs) since it’s a very important and neglected topic and many women suffer from IUD pain and from other IUD problems. 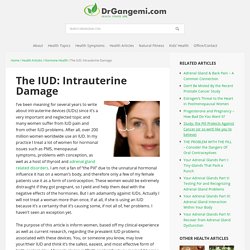 After all, over 200 million women worldwide use an IUD. In my practice I treat a lot of women for hormonal issues such as PMS, menopausal symptoms, problems with conception, as well as a host of thyroid and adrenal gland related disorders. I am not a fan of “the Pill” due to the unnatural hormonal influence it has on a woman’s body, and therefore only a few of my female patients use it as a form of contraception. These women would be extremely distraught if they got pregnant, so I yield and help them deal with the negative effects of the hormones.

But I am adamantly against IUDs. Contraceptive horror stories - why do we ignore them? - The Femedic. After her second child was born, 39-year-old Mary-Ann, an accessory designer, got the copper coil fitted as she wanted a form of contraception that didn’t involve hormones. The copper coil, or IUD, is a small T-shaped device, made of plastic and copper, which is inserted into the womb and prevents pregnancy for up to ten years. But when Mary-Ann went to have to have her coil removed when it stopped working, her GP was unable to locate it. After “several attempts” with “different tools”, which left Mary-Ann in a considerable amount of discomfort, her GP had to give up and sent her for a scan. The scan showed the coil had dropped down in her womb, so Mary-Ann was referred to a gynaecologist for removal. No one had sent the gyno the scans from the hospital however, and Mary-Ann was subjected to another painful and invasive half an hour of “another health professional sweeping blindly about my womb”.

Blackfishing the IUD — WOLFMAN BOOKS. COPPER TOXICITY – Flow Surge Healing. Copper Toxicity, a form of chronic heavy metal toxicity/mineral imbalance, can very accurately be described as a silent epidemic that is currently on the rise, yet is not well-known, nor properly understood within the medical community or general population. When I was first made aware of the fact that Copper Toxicity was one of the primary core underlying causes of my exhibiting, exceptionally debilitating symptoms (which I had been experiencing a few of to some degree for my entire life), I too had never heard of this imbalance.

Over the past several years, I have tenaciously studied the copper mineral and this condition, having become very familiar with the intricate physiology behind this imbalance, as well as the copious array of extremely adverse effects that Copper Toxicity catalyzes on the body, the mind, and the spirit. Change. Main.