Home - DECENT. Disrupting FedEx: The Startups Unbundling FedEx, UPS and the Logistics Industry. From Shyp to Haven to Uber, companies like FedEx and UPS are being unbundled by an army of startups. 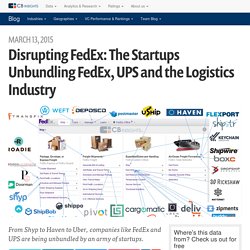 Are shipping & logistics titans like FedEx and UPS being unbundled by startups? Drawing inspiration from Andrew Parker & David Haber’s Disaggregation of Craigslist (both of Spark Capital), as well as the Disaggregation of a Bank by Tom Loverro (RRE) and Alexander Pease (Union Square Ventures), we looked at today’s US startups targeting shipping and logistics companies to visualize the Unbundling of FedEx. Get free reports, data and graphs on emerging industries, startups & VC. The graphic below includes startups like Shyp, which simplifies the process of shipping packages using a mobile platform and a fleet of “Shyp Heroes”, to freight rate comparison products like Pivot Freight, to on demand delivery/courier options such as Postmates and Uber.

The CIA shuts down program that gives scientists access to vital climate change data. The CIA will no longer allow climate change scientists to access data from spy satellites and submarines in order to study global warming. 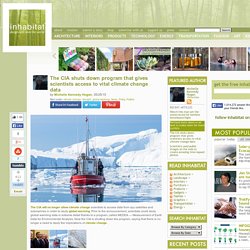 Prior to the announcement, scientists could study global warming data in extreme detail thanks to a program, called MEDEA — Measurement of Earth Data for Environmental Analysis. Now the CIA is shutting down the program, saying that there is no longer a need to study the implications of climate change. The CIA says that it will use external experts occasionally on the subject, but will no longer provide constant access to its “extremely accurate and rare data.” This comes on the heels of President Obama calling climate change “an immediate risk to national security,” in a commencement address to the U.S.

Coast Guard Academy. Cutting off access to this type of data raises many concerns, particularly at a time when scientists require more data to deal with climate change issues, not less. The program was originally launched by George. The Techno-Islands That May Replace the Maldives. Ghana’s bicycle which is creating jobs while it saves the soil. Six years ago, Bernice Dapaah decided to forge an unconventional path into employment. 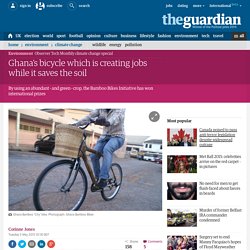 About to graduate with a business administration degree but facing a bleak job market in Ghana, she joined forces with a handful of engineering students to create an innovative product from an abundant crop: bamboo. Her inspiration was an initiative, led by the International Network of Bamboo and Rattan, exploring sustainable, green ways to help producers out of poverty. “There’s a lot of unemployment in the country and we didn’t want to just follow the masses and look for white-collar jobs,” she says. “We wanted to come up with an idea that would also create employment for other youth.” The result is the Ghana Bamboo Bikes Initiative, a social enterprise based in Kumasi, southern Ghana, where strong, lightweight and durable bikes are made out of bamboo and built by an ever-growing team of young people specially trained for the role.

UNDP Representation Office in Brussels. ‘Two-Storey village’ is the phrase that locals from the surrounding villages use to describe this disaster resilient habitat built with the support of UNDP, EU and other donors, and designed with inputs from traditional knowledge. 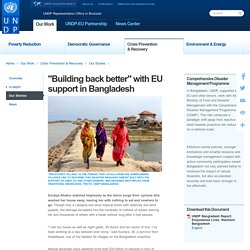 Photo: UNDP Bangladesh Suraiya Khatun watched helplessly as the storm surge from cyclone Aila washed her house away, leaving her with nothing to eat and nowhere to go. Though only a category-one level tropical storm with relatively low wind speeds, the damage escalated into the hundreds of millions of dollars leaving her and thousands of others with a bleak outlook long after it had passed.

“I lost my house as well as eight goats, 20 ducks and ten sacks of rice. I’ve been working as a day labourer ever since,” said Suraiya, 45, a survivor from Kedarbazar, one of the hardest hit villages on the Bangladesh coastline. UN-Habitat - United Nations Human Settlements Programme. Straw into gold: A TED Fellow cultivates mushrooms to reduce emissions.

Social entrepreneur Trang Tran is teaching Vietnamese farmers how to use rice straw as a material in which to grow profitable mushrooms, helping to reduce greenhouse gas emissions and improve livelihoods. 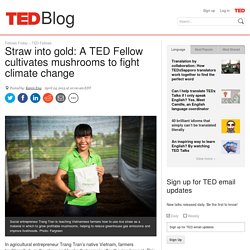 Photo: Fargreen In agricultural entrepreneur Trang Tran’s native Vietnam, farmers traditionally burn the straw and husks that remain after the rice harvest. This practice happens at least twice a year for two months at a time, releasing noxious smoke and greenhouse gases into the atmosphere. Tran’s solution: using rice straw to cultivate mushrooms. Her social enterprise Fargreen is standardizing the process and teaching farmers how to recycle their own agricultural waste and improve their livelihoods.

How did you become interested in the burning of rice straw as an environmental problem? Rice straw burning is something that happens every harvest season, and it happens all around us. Fargreen.

A VUCA world. Mega cities. The Anthropocene. Climate Disasters. The Arctic Race. Non-human persons. Intelligence diversity. The Dark Side of the Sharing Economy. The Google future.