This Awesome Concept Car Splits Into Two Motorcycles. Here at Fast Company, I have a video series called Creative Director for a Day. 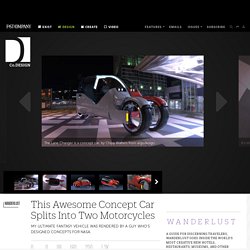 The premise is simple. I walk into a business and tell people far more talented than myself what to do for a day. In the latest episode, I pitched Cadillac on a car that drove like any car you know, but with the push of a button, split into two badass motorcycles. Without spoiling the video above, I’ll say that Cadillac wasn’t huge on the idea! So I tapped the Austin-based firm argodesign—the same guys who created these concepts for the future of wearables and this drone ambulance—to flesh out the concept further. Voiture et mobilité du futur. Knight Foundation. 00 Intro LIVABLE CITIES start slowly, says Gil Penalosa, founder and chair of 8-80 Cities. 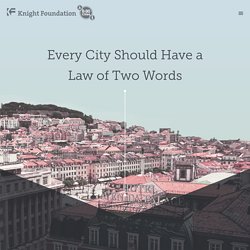 They start with traffic slowed down to 20 mph in neighborhoods, to make pedestrians safe whether they are eight or 80 years old. Bike lanes are physically separated from roadways so people who would have never considered biking feel safe pedaling their toddlers to school. Farmer’s Market On Wheels Delivers Veggies To Toronto’s Food Deserts. Food deserts are defined as areas without proper access to fresh, healthy and affordable food. 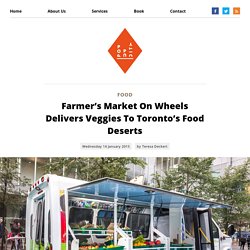 Toronto’s recently launched Mobile Good Food Market wants to overcome this problem by selling fresh produce on the streets in areas where people have few nutritious food options. Do you still remember your New Year’s resolutions? You might have promised yourself to eat more veggies, or to prepare healthy meals more often. It all seems easy to accomplish in areas where farmer’s markets are popping up and where fresh vegetables and fruits are stacked in pyramids at supermarkets. Terra Motors unveils electric three-wheeler for India. Japanese electric vehicle (EV) startup Terra Motors today unveiled a three-wheeler to be sold in developing Asian markets as an affordable and environmentally-minded alternative to gas-powered scooters and trikes. 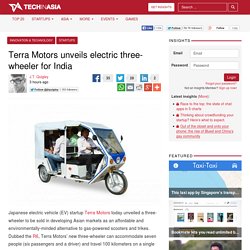 Dubbed the R6, Terra Motors’ new three-wheeler can accommodate seven people (six passengers and a driver) and travel 100 kilometers on a single charge. The startup claims that charging costs amount to a mere US$328 per year. A similar gas-powered three-wheeler, on the other hand, burns through US$4,307 of petrol annually. These estimates are based on the cost of electricity and gasoline in Delhi, as Terra Motors is targeting the Indian market, specifically, for the R6’s debut. It has set a sales goal of 10,000 units in the country for 2015. Tuk tuk-style transportation vehicles are a common sight across South and Southeast Asia. Why Can't Public Transit Be Free? About 500 subway riders in Stockholm have an ingenious scheme to avoid paying fares. 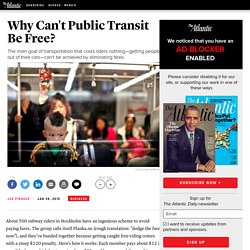 The group calls itself Planka.nu (rough translation: "dodge the fare now"), and they’ve banded together because getting caught free-riding comes with a steep $120 penalty. Here's how it works: Each member pays about $12 in monthly dues—which beats paying for a $35 weekly pass—and the resulting pool of cash more than covers any fines members incur. As an informal insurance group, Planka.nu has proven both successful and financially solvent. UN NÉCESSAIRE NOUVEAU LANGAGE ? Go West, Young Han. November 18, 2014: it’s a day that should live forever in history. 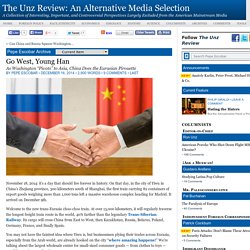 On that day, in the city of Yiwu in China’s Zhejiang province, 300 kilometers south of Shanghai, the first train carrying 82 containers of export goods weighing more than 1,000 tons left a massive warehouse complex heading for Madrid. It arrived on December 9th. Welcome to the new trans-Eurasia choo-choo train. Introducing the world's first and only Smartscooter™ Hello-stranger. If you’ve ever been on a subway or public bus, you know the rules. 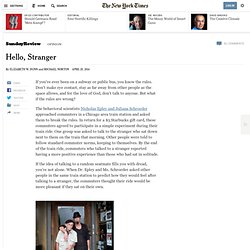 Don’t make eye contact, stay as far away from other people as the space allows, and for the love of God, don’t talk to anyone. But what if the rules are wrong? The behavioral scientists Nicholas Epley and Juliana Schroeder approached commuters in a Chicago area train station and asked them to break the rules. In return for a $5 Starbucks gift card, these commuters agreed to participate in a simple experiment during their train ride.

One group was asked to talk to the stranger who sat down next to them on the train that morning. MUV-e Scooter Is No Longer Just A Concept, It’s a Fully Functional Vehicle for Urban Cities. If you are a loyal reader of Tuvie, you would have read about MUV-e Scooter. 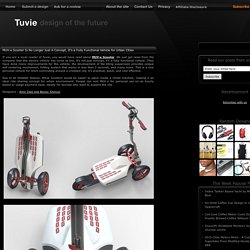 We just got news from the company that this electric vehicle has come to live, it’s not just concept, it’s a fully functional vehicle. They have done many improvements for this vehicle, the development of the tilting suspension provides unique self centering mechanism, folding system that works in less than 3 seconds, and many more. This is a nice personal vehicle for short commuting around a crowded city, it’s practical, quick, and cost effective. 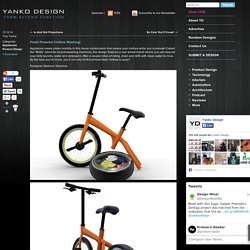 Appliance meets urban mobility in this clever combination that cleans your clothes while you commute! Called the “BiWa” (short for bicycle/washing machine), the design features a rear wheel barrel where you can deposit your dirty laundry, water and detergent. After a couple miles of riding, drain and refill with clean water to rinse. Los Angeles Is Building an e-Highway. The neighboring ports of Los Angeles and Long Beach bring in roughly 40 percent of the goods shipped to the United States. 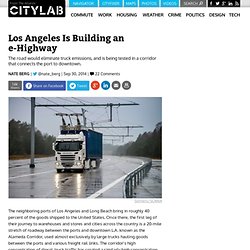 Once there, the first leg of their journey to warehouses and stores and cities across the country is a 20-mile stretch of roadway between the ports and downtown L.A. known as the Alameda Corridor, used almost exclusively by large trucks hauling goods between the ports and various freight rail links. The corridor's high concentration of diesel-truck traffic has created a similarly high concentration of pollution in the surrounding areas, causing health and air-quality concerns for nearby residents and the region as a whole. But a new road design project dubbed the e-highway is aiming to reduce and maybe even eliminate the pollution problems caused by all this truck traffic. These Pedal-Powered Pod Cars Travel Above City Streets, So You Can Avoid Traffic.

Why drive to work when you can arrive in your own pedal-powered pod car, far above traffic? That's the vision of a Canadian company called Shweeb, which hopes to soon begin installing what it calls the "most sustainable form of public transit" in cities around the world. Hanging from rails up to 80 feet above the street, the Skysmart system uses a series of personal pods that run on either solar power or pedaling from the passengers inside. Book and buy train tickets in France and Germany - Capitaine Train. Is This The Future of The Airline Website?

Freightos And The Epic Challenge Of Building Software For Logistics. The high-tech gadgets you're buying this season have a secret transportation problem. The freight service companies that get cargo containers full of video game consoles, LCD TVs, and smartphones onto massive ships to move them across oceans still rely on handshake agreements, faxes, and emails. It’s a field ripe for disruption, and an Israeli startup called Freightos thinks they see an opportunity to create a Priceline-style bidding platform for international freight.

In fact, the company bought former Priceline CFO Robert Mylod onto their board this past October to do just that. Touching the city. A daring assumption: Maybe, our metropolises do not suffer from a lack of space. Maybe, we only move within them in the wrong way. A notion that suggests itself when we watch traceurs navigate the city. Our entire life constitutes of covering distances from A to B. Yet our approach is not always efficient. Parkour, in turn, is just that. Mr. Hoverboard? Still in the Future. Continue reading the main story Video. Gallery For > Future Cargo Ships. To Park or Not to Park. Integrations. Jeffreymilsteinflying6. The world leader in bike-sharing is… China - Quartz. Pulitzer Center. WHILL. Beijing Subways Now Accept Trash as Payment. Photo: YouTube/FantasticPlastics4's channel Riding the subway is a common means of transportation in big cities around the world, but the daily commute can add up to a rather large expense.

That’s why cities like Beijing have created an incentive to save riders money while preserving the environment. Some stations now offer passengers the ability to pay their way with plastic bottles. In 2012, the operating firm Incom positioned 100 recycle-to-ride machines in stations around the city. Commuters simply put a plastic bottle in the receptacle and get 5 to 15 cents off their rechargeable subway pass per bottle. [Dragon Ball] Frieza’s (フリーザ) Ride Made by Hyundai. Take a look! Big Size Images, Full Info & Video. Renault’s Off-Roader Concept Launches a Drone Out of Its Roof.

Renault. Taku-Tanku - Stereotank. A Coach Flight That Doesn't Suck? Just Wait Until 2018. De zelfrijdende auto (2014) - Even Apeldoorn bellen. At the Furthest Edges of China’s Urban Growth, a Transit Invasion. In the far south of Chengdu, past the Tianfu Software Park and the New Century Global Center, where just two years ago there were vast, open fields, the final bolts are being tightened on the extension of Metro Line 1. The metro follows Tianfu Boulevard from the city center all the way south until it terminates in a collision of dirt, cranes and newly paved highway — the front lines of Chengdu’s urban expansion.

Here, black tar and fresh concrete dry on suburban streets like Huafu Boulevard, a five-lane roadway that divides a new crop of exclusive gated communities from the ramshackle chaos of the old country towns sprawling south into the fields that feed the city. The two cultures of robocars. Voyaging into the Future tcm92 55520. Millions Stranded By a Total Transportation System Collapse? Tokyo Has a Plan for That. When Russian filmmaker Andrei Tarkovsky needed images of a future city for his science-fiction film Solaris (1972), he came, of course, to Tokyo. Flux Snowshoe by Eric Brunt. Helsinki's ambitious plan to make car ownership pointless in 10 years. Новый русский трамвай. Personal Rapid Transit grids - Contest 2011: National - Climate CoLab. Benefits. Sky cars to be built in Tel Aviv. Robot valet to park cars at German airport. What’s Up With That: Building Bigger Roads Actually Makes Traffic Worse.