Google is developing a cancer and heart attack-detecting pill. Google is working on a nanoparticle pill that could identify cancers, heart attacks and other diseases before they become a problem. 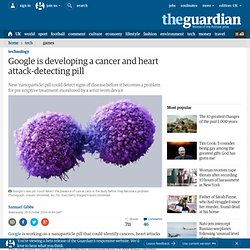 The pill would contain magnetic particles approximately 10,000 times smaller than the width of a human hair. These tiny particles will have antibodies or proteins attached to them that detect the presence of “biomarker” molecules inside the body that indicate diseases such as cancer or an imminent heart attack. “Essentially the idea is simple; you just swallow a pill with the nano particles, which are decorated with antibodies or molecules that detect other molecules,” explained Andrew Conrad, head of life sciences inside the Google’s “moonshot” X research lab to WSJD Live conference in California Tuesday. “They course through your body and because the cores of these particles are magnetic, you can call them somewhere and ask them what they saw.” ‘Hey, what did you see?’ “We ask them: Hey, what did you see? Pre-emptive rather than reactive.

Inside 23andMe founder Anne Wojcicki's $99 DNA Revolution. There's a lot you can do for your child with 99 dollars. 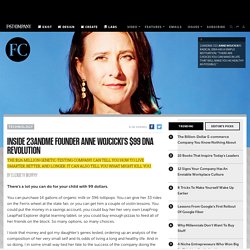 You can purchase 14 gallons of organic milk or 396 lollipops. You can give her 33 rides on the Ferris wheel at the state fair, or you can get him a couple of violin lessons. You could put the money in a savings account, you could buy her her very own LeapFrog LeapPad Explorer digital learning tablet, or you could buy enough pizzas to feed all of her friends on the block. So many options, so many choices. I took that money and got my daughter's genes tested, ordering up an analysis of the composition of her very small self and its odds of living a long and healthy life.

Last May, Angelina Jolie revealed in a New York Times op-ed that she had chosen to have a double mastectomy after testing positive for a likely lethal BRCA1 mutation. DNA-screening test 23andMe launches in UK after US ban. Genetic testing company 23andMe is launching its personal genome service in the UK after it was banned in the US. 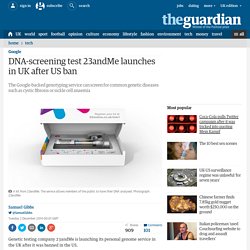 The service allows people to send their saliva in a testing kit to have their DNA screened for genes associated with certain inherited conditions, such as cystic fibrosis or sickle cell anaemia, and other genetic markers relating to parts of their lives and ancestry. “We can take complicated genetic information and distill it in language that people can actually understand,” the 23andMe chief executive Anne Wojcicki said.

“The genome is fascinating, and it’s the most exciting scientific revolution of our lifetime. The goal is to keep people engaged with their own genome, so that they know what it means for them and then keep them abreast of the scientific discoveries as they unfold.” The spit kits cost £125 and are sent to the Netherlands before testing in the US. ‘DNA isn’t something scary or all about disease’ ‘Understandable concern that this type of genetic testing’ Google made a 'Google Drive for genomes,' and it wants hospitals and universities to sign on. Google wants to help university labs and hospitals store their clients’ genomes in the cloud, and they’re calling the effort "Google Genomics. 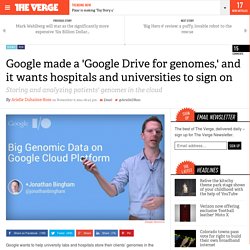 " Google wants researchers to "explore genetic variation interactively. " Google Genomics was actually launched last March, but a number of other announcements caused it to go largely unnoticed, reports MIT Technology Review. The goal of the system, Google says, is to "explore genetic variation interactively. " This means allowing researchers to access millions of genomes and run batch analyses, easily. Right now, decoding a single human genome can take a few hours or more, and the size of the resulting data amounts to about 100 gigabytes of raw data. The service costs between $25 and $0.25 a year for a single genome David Glazer, the Google software engineer leading the effort, told MIT that making the act of comparing genomes as easy as possible is becoming increasingly important, because the way researchers study genetics has shifted.

Canada - DNA Genetic Testing & Analysis. Welcome to Forbes. Genomics. Google Is Developing a Cancer-Detecting Nanoparticle Pill – Mind Unleashed. It seems that web services giant Google entered into the area of health, as it is developing magnetic particles capable of detecting cancer, heart attack, stroke and other serious conditions at an early stage. 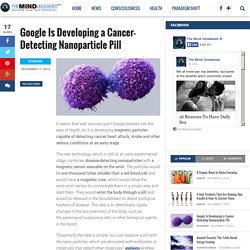 The new technology, which is still at an early experimental stage, combines disease-detecting nanoparticles with a magnetic sensor wearable on the wrist. The particles would be one thousand times smaller than a red blood cell and would have a magnetic core, which would allow the wrist-worn sensor to concentrate them in a single area and read them. They would enter the body through a pill and would be released in the bloodstream to detect biological markers of disease. The idea is to detect early subtle changes in the bio-chemistry of the body, such as the presence of suspicious cells or other biological agents in the blood. It is known that early diagnosis plays a key role in addressing many diseases.