Unknown Fields Division - Mission. Sohail Inayatullah. Richard Slaughter. In 2009 the special issue of Futures on Integral Futures that was edited by Slaughter was voted one of the "most important futures works of 2008" by the Association of Professional Futurists.[1] Founded in 1999 at the Swinburne University of Technology, the Australian Foresight Institute was designed as a specialized research and post-graduate teaching unit. 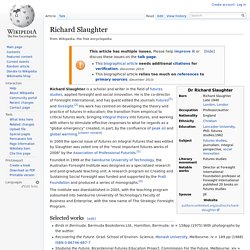 Are We Creating the Future by Predicting It? With all this talk of foresight strategy, we have reached a point where the lines between predicting and creating the future are starting to blur. 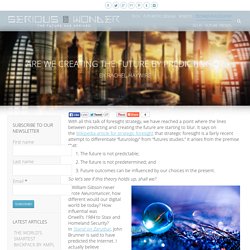 It says on the Wikipedia article for strategic foresight that strategic foresight is a fairly recent attempt to differentiate “futurology” from “futures studies.” It arises from the premise that: 1. Futures Studies by Sohail Inayatullah, Ivana Milojevic and global futurists. Prototyping the future. ‘Futures’ is a field that, since it was conceived in the 1960s, has existed to make the future better. 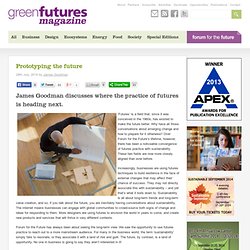 Why have all those conversations about emerging change and how to prepare for it otherwise? Over Forum for the Future’s lifetime, however, there has been a noticeable convergence of futures practice with sustainability. These two fields are now more closely aligned than ever before. Increasingly, businesses are using futures techniques to build resilience in the face of external changes that may affect their chance of success.

They may not directly associate this with sustainability – and yet that’s what it boils down to. Forum for the Future has always been about seeing the long-term view. Flash Foresight and Predicting the Future - an Interview with futurist Daniel Burrus. Trevor HALDENBY - What does it mean to be a futurist ? John A. SWEENEY - Postnormal Concept. Verne WHEELWRIGHT - What is Futures Studies ? Future Savvy: Quality in Foresight. When a quality view of emerging customer (or stakeholder) needs, requirements, and preferences has been achieved, what are the levers you pull? 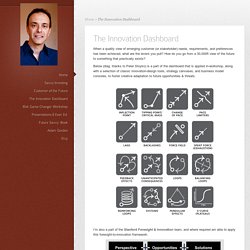 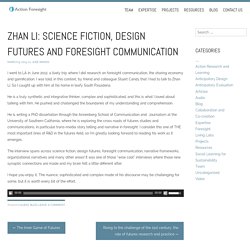 I was told, in this context, by friend and colleague Stuart Candy that I had to talk to Zhan Li. So I caught up with him at his home in leafy South Pasadena. He is a truly synthetic and integrative thinker, complex and sophisticated, and this is what I loved about talking with him. Building better tomorrows. A crash course in technology thinking Have you shot a dronie? 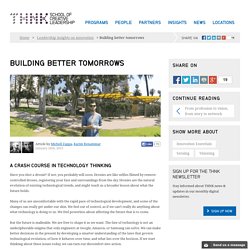 If not, you probably will soon. Dronies are like selfies filmed by remote-controlled drones, registering your face and surroundings from the sky. Dronies are the natural evolution of existing technological trends, and might teach us a broader lesson about what the future holds. Many of us are uncomfortable with the rapid pace of technological development, and some of the changes can really get under our skin. But the future is malleable. The impression we might have from reading Wired or Engadget is how state-of-the-art technology is invariably exciting and moving at breakneck speed.

Future shock. Andrew Marshall: The quiet American. Inscrutably influential HE RARELY speaks in public and almost never to the press. 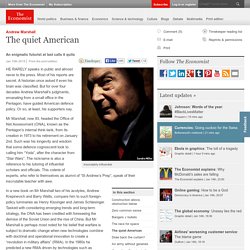 Most of his reports are secret. A historian once asked if even his brain was classified. But for over four decades Andrew Marshall’s judgments, emanating from a small office in the Pentagon, have guided American defence policy. Or so, at least, his supporters say. Mr Marshall, now 93, headed the Office of Net Assessment (ONA), known as the Pentagon’s internal think-tank, from its creation in 1973 to his retirement on January 2nd. Sci-Fi Author Neal Stephenson Joins Mystery Startup Magic Leap as 'Chief Futurist' If nothing else, Magic Leap knows how to capture the imagination. 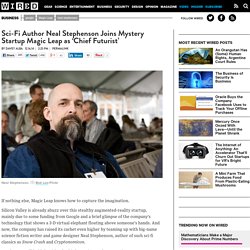 Silicon Valley is already abuzz over this stealthy augmented-reality startup, mainly due to some funding from Google and a brief glimpse of the company’s technology that shows a 3-D virtual elephant floating above someone’s hands. And now, the company has raised its cachet even higher by teaming up with big-name science fiction writer and game designer Neal Stephenson, author of such sci-fi classics as Snow Crash and Cryptonomicon. Stephenson will hold the title of “Chief Futurist” at the mysterious Fort Lauderdale, Florida-based company, which recently announced a $542 million round of funding led by Google. Tech, futures, anthropology. Transit City. It's on the internet. Lisa Ma. ByoLogyc. ZED.TO - A Story About The End of Our World. Justin Pickard. Tobias Revell. Noah Raford » 21st Century Strategy, Policy and Design.

STRANGE TELEMETRY. Superflux. Changeist. Nick Foster. Industrial Designer, Creative Director. Home » FutureEverything. There’s a job contemplating the future of Hershey’s Kisses—a great sign for America. Every month or two, out of professional curiosity, I do a trawl of LinkedIn and a few other job sites to see who is hiring for positions in the field of foresight, futures research, innovation, and other fields related to my area of practice. 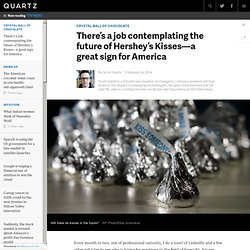 In my usual rounds last week, I came upon a posting for a Senior Manager, Foresight Activation at that most venerable of American chocolatiers, Hershey. I did what I usually do when I come across such a job: I post it to my network on Twitter. Back to the Futurist Interview. Alexander Phillips was kind enough to interview me for the very cool “Back to the Futurist” series over at URBNFUTR. 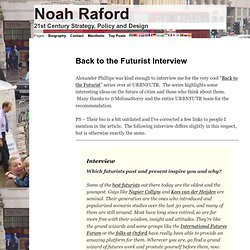 The series highlights some interesting ideas on the future of cities and those who think about them. Many thanks to @MelissaSterry and the entire URBNFUTR team for the recommendation. Future:Types of futurists - Future. Social Types 1. [Preconventional futurist]. One who thinks about the future in relation to self (ego, personal vision), but without either concern for or broad understanding of the norms and conventions of society. 2.