— Life without access to financial services is difficult, expensive and dangerous. It for example, constrains a woman’s ability to plan for her family’s future.

At the community level, it traps households in cycles of poverty. More broadly, it limits the economic growth potential of developing countries.

When trapped in a cash-only system, the unbanked have to hide piles of cash at home. For women, it means worrying about thieves and often about their own husbands. Sending money to a family member in another village is risky and can take days. Obtaining a loan in an emergency is often impossible.

Women spend money differently from men. They tend to invest more in the health and well-being of their families — as much as 10 times more. They give priority to spending on health care, nutritious food and education. A child born in a household where the mother controls the family budget is 20 percent more likely to survive — and much more likely to thrive.

Mobile brings the power of computing and networking in the poorest regions of earth and allows to leapfrog traditional service delivery in health, education, energy, farming, trade, employment and financial services.

What The U.S. Can Learn About Financial Inclusion From The Developing World. Editor’s note: Matt Homer leads the Digital Finance team’s Policy and Partnerships work and USAID‘s financial inclusion investments in India. 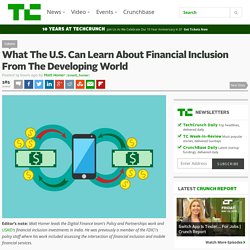 India is arguably Vodafone’s largest potential market for mobile money but the operator is shy of 400,000 active users. According to the group’s 2014/15 results, the operator has a nationwide network of 89,000 agents offering its M-Pesa service in India and had 3.1 million registered mobile money customers at end-March 2015. The made-in-India cashless wonder. How Does India Become A 'Cashless' Country?  Moving to a cashless economy. An Indian diplomat’s wife taking a short course to learn French in Brussels remembers how she was unable to pay her tuition fee in cash. 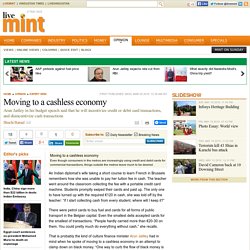 The teacher went around the classroom collecting the fee with a portable credit card machine. Triggering savings among the poor. Recent studies in development economics have underlined the disappointing results of microcredit programmes.1 The focus has now shifted towards other financial products, such as savings. 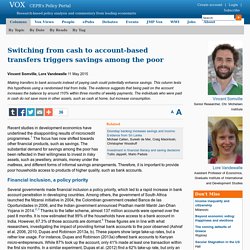 The substantial demand for savings among the poor has been reflected in their willingness to invest in risky assets, such as jewellery, animals, money under the mattress, and different forms of informal savings arrangements. Therefore, it is important to provide poor households access to products of higher quality, such as bank accounts. 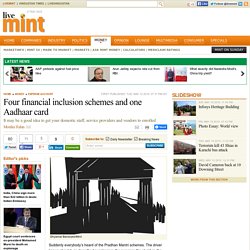 The driver knows about it, so does the housekeeper, the sweeper, the plumber, the “pressguy” and the fruitwala. Spatial Collective. Spectra Wireless and Microsoft 4Afrika launched Africa’s first commercial service network utilising TV white spaces in Ghana. “We are breaking away from the standard way of selling Internet services in Africa,” says Sam Darko, Country Leader of Spectra Wireless. 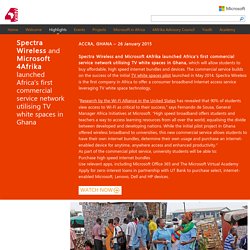 “Everyone wants and needs access to the Internet, but there are very few, if any, reliable, unlimited and affordable solutions for the masses. Our complete djungleEd service for the tertiary education sector provides just that, and together with the application bundles and affordable devices we offer a complete technology upgrade to participating institutions. This service will transform education in Africa.” The cheapest data package starts at just two Ghana cedi per day and provides 24 hours of access. Mobile connectivity in Africa has already arrived. What is the main difference between high-income and developing countries? 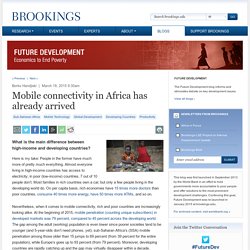 Here is my take: People in the former have much more of pretty much everything. Almost everyone living in high-income countries has access to electricity; in poor (low-income) countries, 7 out of 10 people don’t. Most families in rich countries own a car, but only a few people living in the developing world do. On per capita basis, rich economies have 15 times more doctors than poor countries, consume 40 times more energy, have 50 times more ATMs, and so on. Nevertheless, when it comes to mobile connectivity, rich and poor countries are increasingly looking alike. 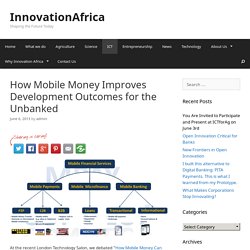 With 30 thought leaders in mobiles, finance, and international development. While the event itself is off-the-record, below is the synopsis of our discussion. Be sure to sign up to get invited to future Salons. Current state of the mobile money industry The mobile money industry is growing rapidly and on a global scale with 167 services spanning 73 different countries (including 41 new service deployments in 2012).

10 Things You Thought You Knew about M-PESA. CGAP provided an update to this article in October 2014. 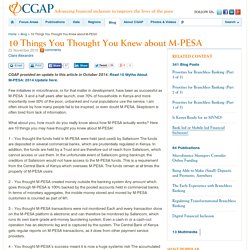 Interview: How M-Pesa innovates new business models for its base of the pyramid customers. This article was republished on The Christian Science Monitor. 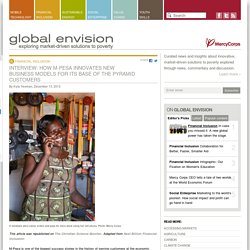 The $12 Gongkai Phone. How cheap can you make a phone?