Army-funded research helps develop digital fibers that could be sewn into uniforms to monitor troops. A programmable fiber developed with Army and other funding at the Institute for Soldier Nanotechnologies at the Massachusetts Institute of Technology, can pass through a needle and be sewn into fabrics, the Army in a statement published June 14, 2021. 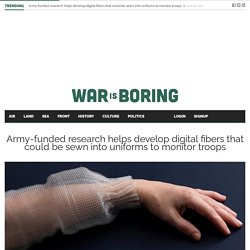 One Step Closer to a Batsuit for Soldiers. Researchers announce new military funding in search for body armor skin that could be 300 times stronger than anything we’ve seen before. 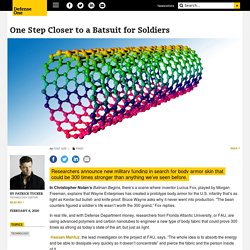 In Christopher Nolan’s Batman Begins, there’s a scene where inventor Lucius Fox, played by Morgan Freeman, explains that Wayne Enterprises has created a prototype body armor for the U.S. infantry that’s as light as Kevlar but bullet- and knife-proof. Bruce Wayne asks why it never went into production. “The bean counters figured a soldier’s life wasn’t worth the 300 grand,” Fox replies. In real life, and with Defense Department money, researchers from Florida Atlantic University, or FAU, are using advanced polymers and carbon nanotubes to engineer a new type of body fabric that could prove 300 times as strong as today’s state of the art, but just as light.

How do you do that? Subscribe Receive daily email updates: Subscribe to the Defense One daily. Be the first to receive updates. Nanotechnology Is Shaping the Hypersonics Race. A protective coating of carbon nanotubes may help the Pentagon field warplanes and missiles that can survive the intense heat generated at five times the speed of sound. 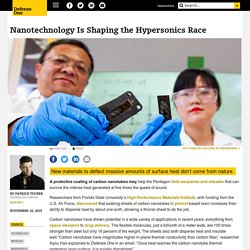 Researchers from Florida State University’s High-Performance Materials Institute, with funding from the U.S. Air Force, discovered that soaking sheets of carbon nanotubes in phenol-based resin increases their ability to disperse heat by about one-sixth, allowing a thinner sheet to do the job. Carbon nanotubes have shown potential in a wide variety of applications in recent years, everything from space elevators to drug delivery.

The flexible molecules, just a billionth of a meter wide, are 100 times stronger than steel but only 16 percent of the weight. US Military Developing Brain Implants to Restore Memory. The U.S. military has chosen two universities to lead a program to develop brain implants to restore memory to veterans who have suffered brain injuries, officials said at a news conference yesterday (July 8). 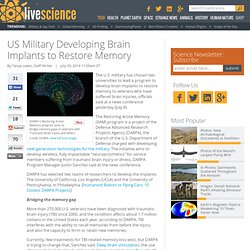 The Restoring Active Memory (RAM) program is a project of the Defense Advanced Research Projects Agency (DARPA), the branch of the U.S. Department of Defense charged with developing next-generation technologies for the military. The initiative aims to develop wireless, fully implantable "neuroprosthetics" for service members suffering from traumatic brain injury or illness, DARPA Program Manager Justin Sanchez said at the news conference. DARPA has selected two teams of researchers to develop the implants: The University of California, Los Angeles (UCLA) and the University of Pennsylvania, in Philadelphia. [Humanoid Robots to Flying Cars: 10 Coolest DARPA Projects] Bridging the memory gap. DARPA to Genetically Engineer Humans by Adding a 47th Chromosome. (Truthstream Media.com) In that 1997 film, society is structured around eugenics as people are bioengineered to be ‘perfect specimens’, and one’s entire life and position in the world is based on their genetics. 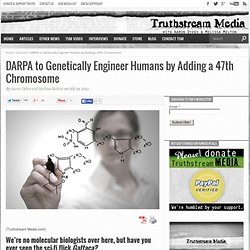 Those conceived naturally without genetic screening are proclaimed “invalid” and only allowed menial jobs, despite the innate talents and skills they may possess. Alternately, the 2011 movie In Time portrays a dystopic future where humans are genetically programmed to stop aging at 25 and could live forever — so long as they earn enough “time credits” to afford to stay alive; the poor perish swiftly under an artificially skyrocketing cost of living that times out their clocks, while the rich who steer the technocracy are gaming the system and living indefinitely.

The Army hopes to have 'physically enhanced' super troops by 2030. While the military may seem to be embracing killer robots from the skies and seas, some futurists in the U.S. Army aren't so sure that there will be platoons of armed robots guarding the perimeters of U.S. combat bases. Instead, enemies of the United States may find themselves squaring off against "superempowered" or "enhanced" troops.

As the need for soldiers with greater levels of technological sophistication and brainpower increases, the Army may try to recruit troops with the promises of turning them into the "Lance Armstrong, if you will, of a soldier," said Col. Kevin Felix, chief of the Future Warfare Division at the Army's Training and Doctrine Command, during a Dec. 14 interview. U.S. Spies See Superhumans, Instant Cities by 2030. Artificial limbs like these could be only the beginning of man-machine interfaces, the National Intelligence Council predicts. 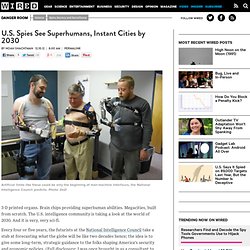 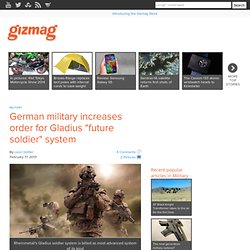