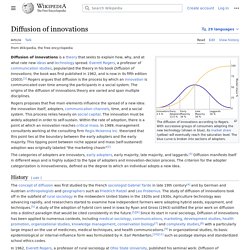 With successive groups of consumers adopting the new technology (shown in blue), its market share (yellow) will eventually reach the saturation level. The blue curve is broken into sections of adopters. Diffusion of innovations is a theory that seeks to explain how, why, and at what rate new ideas and technology spread. Everett Rogers, a professor of communication studies, popularized the theory in his book Diffusion of Innovations; the book was first published in 1962, and is now in its fifth edition (2003).[1] Rogers argues that diffusion is the process by which an innovation is communicated over time among the participants in a social system. The categories of adopters are innovators, early adopters, early majority, late majority, and laggards. History[edit] The Learning Accelerator on Vimeo. When the Computer Takes Over for the Teacher.

Whenever a college student asks me, a veteran high-school English educator, about the prospects of becoming a public-school teacher, I never think it’s enough to say that the role is shifting from "content expert" to "curriculum facilitator. 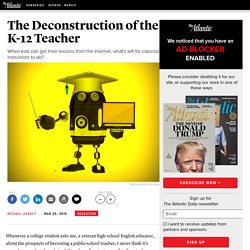 Home « Keeping Pace. Ginger and lemon, a perfect combination for weight loss. Ginger is a well-known root around the world for all of its health properties, especially as an anti-inflammatory and for its gastric properties that assist the digestive system. 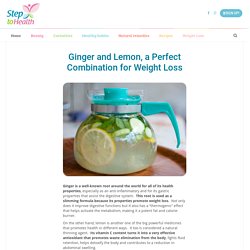 This root is used as a slimming formula because its properties promote weight loss. Not only does it improve digestive functions but it also has a “thermogenic” effect that helps activate the metabolism, making it a potent fat and calorie-burner. On the other hand, lemon is another one of the big powerful medicines that promotes health in different ways. It too is considered a natural thinning agent.

Its vitamin C content turns it into a very effective antioxidant that promotes waste elimination from the body, fights fluid retention, helps detoxify the body and contributes to a reduction in abdominal swelling. How is it possible to lose weight with ginger and lemon? Lemon and ginger tea. What to Eat Before, During and After Exercise. By Lisa Hannam | February 19, 2015 If your workout goals are to look like an “after” photo, but you find that getting past your “before” pic is proving difficult, consider what you’re eating before, during and after you exercise. 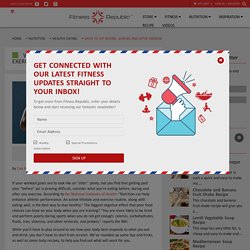 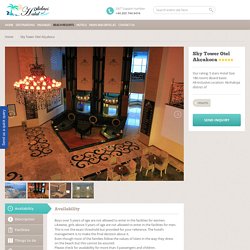 Istanbul Sabiha Gokcen Airport (SAW), 221 km (2 hours 30 min) 2. 9 Easy DIY Spice Blends That Can Help You Lose Weight. Shutterstock Spices are one of the healthiest ingredients you can add to your food: They lend an intense punch of flavor to any recipe, and quality spice blends can make otherwise bland meat and vegetables exciting. 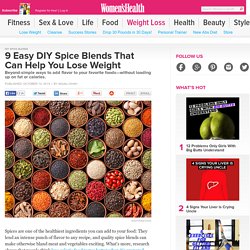 What's more, research shows that people think low-calorie food tastes better when it's prepared with spices and herbs (the same goes for low-fat dishes). Instead of using extra oil or fat in your recipes to make them satisfying, try out these super-simple DIY spice blends. Since you're making them yourself, you know they're free of scary ingredients like additives or preservatives—and they end up being cheaper in the long run! Most of the ingredients in these blends are probably already sitting in your pantry, too—so have at it! Cajun Spice Blend 2 Tbsp cumin 2 Tbsp coriander 2 Tbsp paprika 1 ½ tsp salt 1 ½ tsp black pepper Cayenne pepper to taste (you can go as high as you want here—the more you add, the hotter it will be) 1 Tbsp dried oregano. 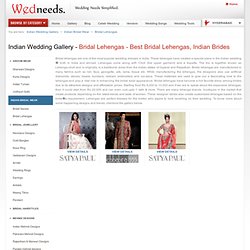 These lehengas have created a special place in the Indian wedding both in India and abroad. How to disappear on the internet (Infographic)